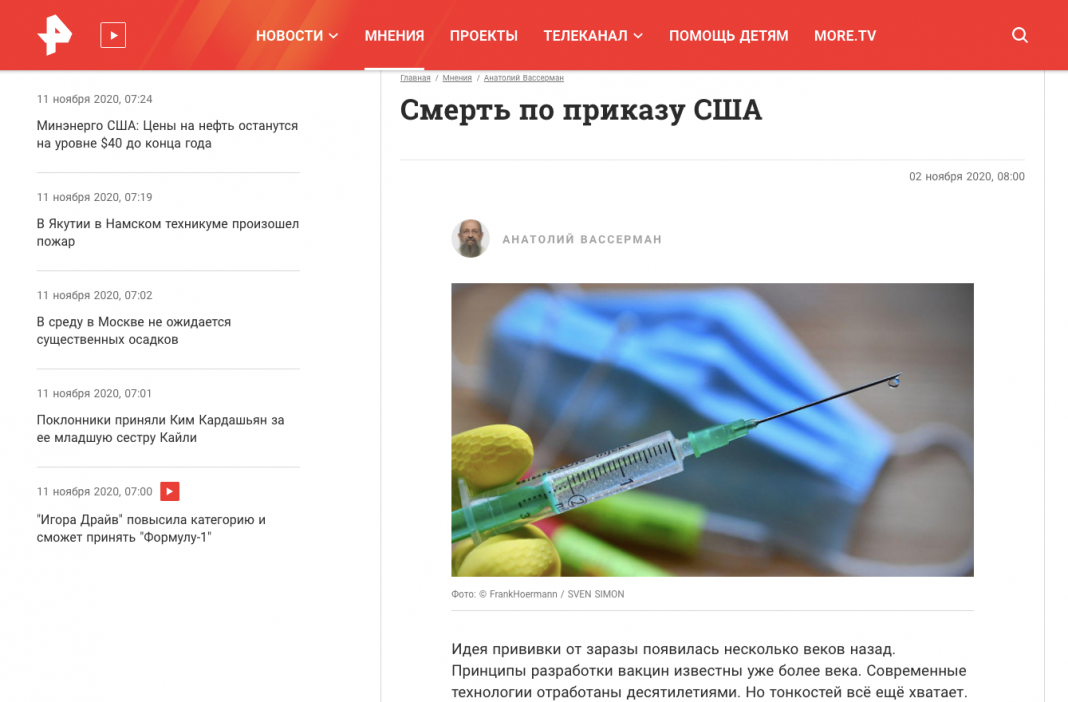 Ukraine has received an offer to conduct COVID-19 clinical trials from a European pharmaceutical companies. The trials will be conducted purely on a voluntary basis and only after the vaccines have been shown to be safe.

The United States have turned Ukrainians into experimental guinea pigs declared several Russian media outlets, reacting to Ukraine’s participation in European clinical trials for a COVID-19 vaccine.  Russian analysts claim that American pharmaceutical companies are testing their vaccines on Ukrainians against their will.

“This has nothing to do with safety for Ukraine.  Western masters will test the safety of their new vaccine on Ukrainians” Russian media announced.  Death on US orders. Ukrainian guinea pigs jump to their end Ren.TV, NewsFront, Narodnyi Korrespondent and others declared.

Clinical trials of medicines are a normal world practice which has nothing to do with “experiments conducted on Ukrainians” as Russian media claim.

According to the Centers for Disease Control and Prevention, the development of new vaccines goes through several stages. The clinical development segment of that process is made up of three phases. During Phase I, small groups of people receive the trial vaccine. In Phase II the clinical study is expanded and the vaccine is given to people who have characteristics (such as age and state of health) similar to those for whom the new vaccine is intended. In Phase III the vaccine is given to thousands of people and tested for efficacy and safety. Ukraine will be participating in the third stage of the COVID vaccine trials.

Since the onset of the coronavirus pandemic, more than 250 clinical vaccine trials have been conducted throughout the world. Nearly all EU countries are participating in clinical trials along with Japan, Canada, Australia, New Zealand, the US and other countries. Tetiana Dumenko, the Director of the Ukrainian Health Ministry Expert Center announced during an October 16 television appearance that Ukraine would be participating in a phase III COVID vaccine clinical trial involving 4200 volunteers and also assured that these trials would not begin in Ukraine until it was certain that the vaccine was safe.

Clinical centers in Kyiv, Vinnytsia, Lviv and Ivano Frankivsk will participate in the trial. Dumenko did not name a date when the trials would actually begin, but assured that as soon as the Health Ministry gave its approval, all pertinent details about the clinical trials would be made public.