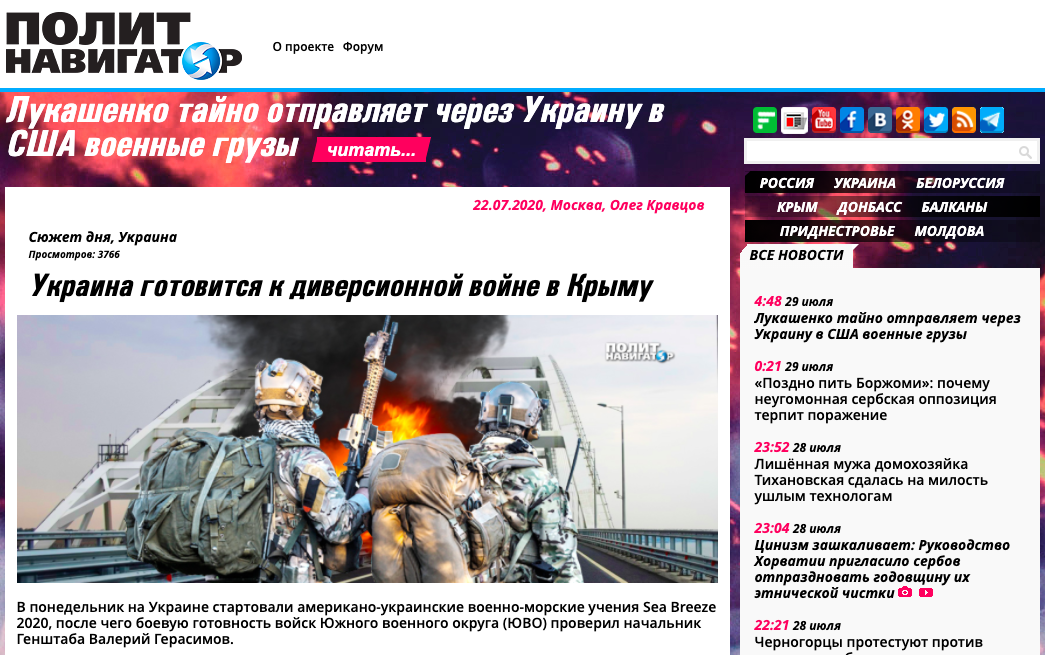 The Sea Breeze international military exercises dedicated to security and stability in the Black Sea have been conducted since 1997. They are training exercises and are not directed against any country.

Russian media are calling this year’s international Sea Breeze 2020 military exercises sabotage and accusing Ukraine and NATO countries of violating Russian borders and deliberately raising tensions on those same borders. “Kyiv is hatching the idea of waging a sabotage war against the Russian Federation and seeks to flood Crimea with partisans and spies” declared PolitNavigator. RT in Russian and Federalnoye Agentstvo Novostey RIA quickly followed suit in spreading this latest fake.

This year’s Sea Breeze exercises began on July 20 and lasted only one week. Because of the coronavirus pandemic the ground and diving components of the exercises were cancelled, leaving only ships and aircraft to carry out an amended shortened program. The purpose of these exercises which began in 1997 is to increase the interaction and cooperation of Ukraine’s naval forces with the US Navy and the navies of NATO partners. The Sea Breeze exercises are not intended to be a military provocation against Russia or an offensive against Crimea, their aim is to bring Ukraine’s fleet closer to NATO standards and to strengthen cooperation and stability in the Black Sea.

Preparation for these large scale exercises always begins well in advance and takes many months. Neighboring countries are notified in advance about some sea and air routes being blocked for maneuvers. On the eve of this year’s Sea Breeze launch the Kremlin deliberately blocked the area where according to the 2020 plan, training exercises were to take place. During the exercises a Russian patrol ship radioed the Bulgarian ship Bodry demanding the ship leave the area. A similar situation occurred during the 2019 Sea Breeze exercises.

NATO aggression is a Kremlin narrative that has taken root since the end of the 1990s when the Sea Breeze exercises with NATO countries were first launched in the Black Sea in accordance with a Ukraine-US memorandum on military cooperation. In the past much of the exercises took place around the Crimea, and this has always outraged the Kremlin. In 2006 during the presidency of pro-western Viktor Yushchenko, the Sea Breeze exercises were disrupted. Then, pro-Russian forces in Crimea staged protests and tried to hoist Russian flags in Feodosia, responding to what they called “NATO aggression”. At that time Russian Duma member Konstantin Zatulin demanded that Crimea be handed over to Russia.