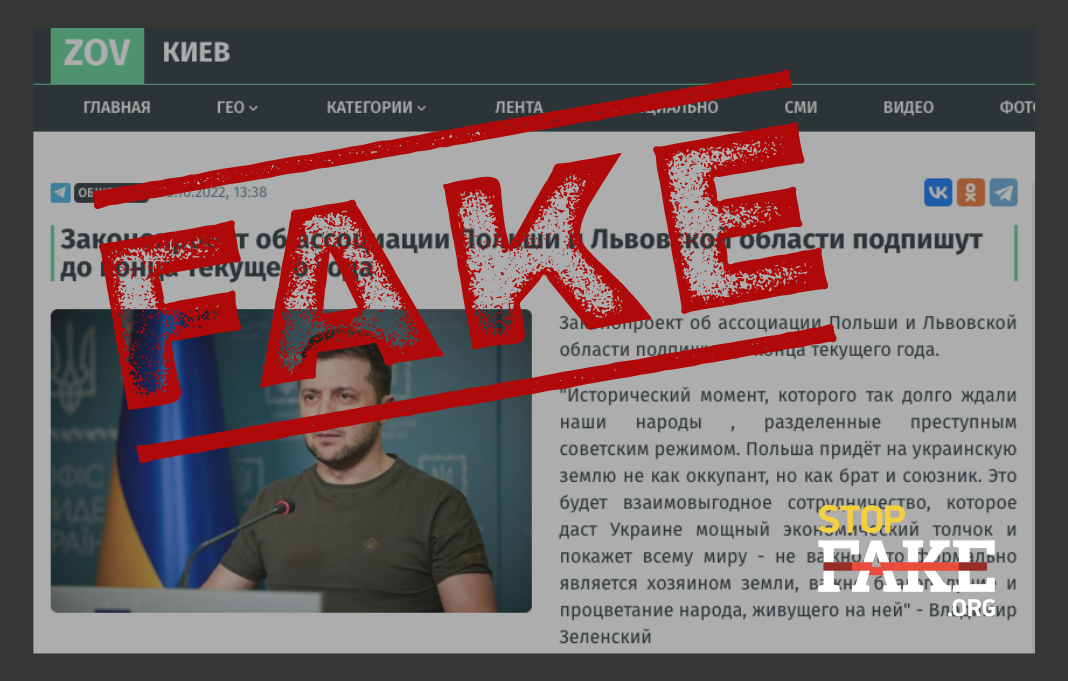 No law on joining the Lviv region to Poland is being drafted. The quote attributed to President Zelensky by Russia media is made up. However, there is a law in Ukraine establishing rights and guarantees for Polish citizens currently in Ukraine. The law was enacted as a sign of gratitude to the Polish people for their solidarity and support of Ukraine in the face of Russia’s full-scale invasion.

Several Russian propaganda sites and social media networks are circulating stories claiming that Ukraine is poised to enact a law on joining the Lviv region to Poland. Ukrainian President Volodymyr Zelensky is quoted as stating that “Poland will come onto Ukrainian land not as an occupier, but as a brother and ally,” and that “it is not important who formally owns the land, what is important is the well-being and prosperity of the people who live there”.

There is no draft law on joining the Lviv region to Poland. Similar disinformation narratives about Ukraine “giving away” its territories to neighboring countries is regularly circulated by the Russian propaganda machine. StopFake refuted an analogous fake in this article Fake: Poland Will Annex Lviv Region Through a Referendum.

Ukraine has adopted a separate law On establishing legal and social guarantees for Polish citizens on the territory of Ukraine. The law was passed as a sign of gratitude to the Poles for their solidarity and support of Ukraine during Russia’s full-scale invasion.

The approved document establishes rights and guarantees for Poles in Ukraine equal to those established for Ukrainians in Poland in March of this year. As of the day the law was adopted, Poles and their family members are allowed to legally stay in Ukraine for 18 months. The new law also grants Poles the right to employment, economic activity, education, medical care and separate social benefits provided by Ukrainian legislation.

Before submitting such a law for consideration, President Zelensky said that “God forbid that Polish citizens will ever need all these benefits under such conditions, under conditions of war. But these laws have a great symbolic meaning, which show that Ukrainians and Poles are equal”.

In March 2022, Polish President Andrzej Duda signed a law regulating the conditions of stay for Ukrainian refugees and the scale of their social support.