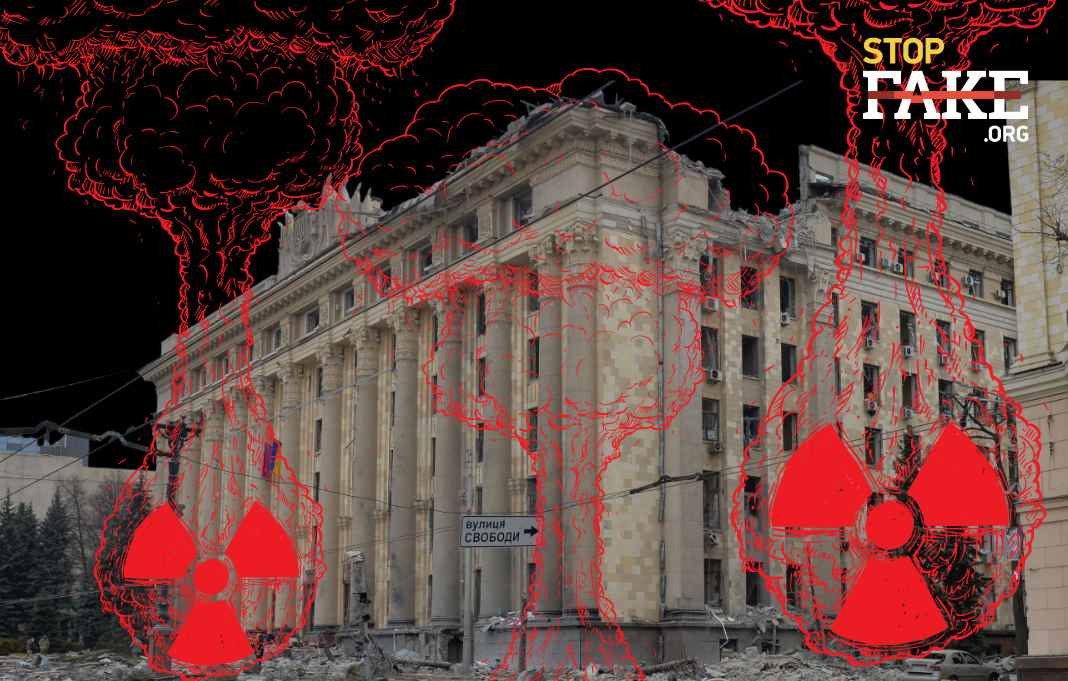 Ukrainian security services are not launching any provocations with nuclear materials in the Kharkiv Institute of Physics and Technology. A day earlier invading Russian troops shelled the facility with Grad rockets, and the Kremlin is trying to hide it.

Russia’s Defense Ministry is trying to justify the bloody actions of its army in Ukraine. On March 7, a day after Russian invading troops attacked a Kharkiv institute that contains a nuclear research facility, the Russian Defense Ministry announced that Ukraine’s Security Service is planning a “nuclear provocation”. “Nationalists have already planted explosives at an experimental nuclear reactor at the Kharkiv Institute of Physics and Technology” writes the state RIA Novosti agency. Facebook posts spread the fake further.

Unlike Russia, Ukraine and the rest of the civilized world are well aware of the terrible consequences of nuclear reactor or any other scientific nuclear facility being destroyed or damaged. It was Russia that first invaded Ukraine and then began spreading fakes about the possibility of some sort of nuclear calamity in the country. To that end on February 24 the Russian invaders first seized the Chornobyl nuclear power plant and all its outlying facilities. On the night of March 4, Russian troops fired on the Zaporizhzhia nuclear power plant. As a result of this attack on Europe’s largest nuclear power plant, part of the facility caught fire. Russian troops now control a strategic target, endangering not only Ukraine and nearby EU countries, but also Belarus and its own territories.

Russian troops continued their attacks on nuclear facilities in Ukraine on March 6, firing Grad rockets at the Kharkiv Physics and Technology Institute. The Institute holds neutron source nuclear research installation containing 37 nuclear fuel elements. Damage to this installation would result in a significant environmental catastrophe. As a result of Russian shelling

To cover up its own crimes, the day after shelling the Kharkiv Institute, Russia’s propaganda machine launched a new fake for its own audience, warning that Ukraine’s Security Service was preparing some sort of nuclear provocation. Unlike Russia’s reckless invading army, Ukraine scrupulously adheres to the three basic principles of its nuclear-free status, no accepting of nuclear materials, no supply, and no production.

Ukraine lost its nuclear status in 2001 when the last intercontinental solid propellant missile launcher on its territory was disposed of. In 2012 Ukraine fulfilled its commitment to dispose of its supplies of highly enriched uranium used in research, but which could also be used to develop nuclear weapons. It is worth noting that all of Ukraine’s enriched uranium was shipped to Russia with the direct assistance of the Kremlin. In light of this fact, Russia’s warning about Ukraine’s nuclear weapons development or nuclear provocations are particularly cynical.

Ukraine receives low-enriched uranium and US funding for the neutron source project. The neutron source installation cannot be used to create nuclear weapons, the project involves scientific research to extend the life of nuclear reactors, as well as research with neutrons in the field of nuclear physics, energy, and nuclear medicine. It is also worth noting that the nuclear installation was designed with the participation of experts not only from Ukraine and Western countries, but also from Russia.