The Kremlin’s lead propagandist Dimitri Kiselyov, whom the BBC dubbed Russia’s chief spin doctor who specializes in portraying Ukraine as a country of fascists, often devotes portions of his weekly Vesti Nedeli to heap all manner of calumny on Ukraine and its government. Kiselyov’s Ukraine segments all follow the same trajectory, President Poroshenko is a failure and his only option is to flee the country, Ukraine is preparing Nazis for war and only manages to exist because it has managed to grab a multitude of international loans and credits.

Kiselyov rattles on about Standard and Poor’s and Fitch ratings for Ukraine and Russia, compares them and brags that Russia’s rating is positive while Ukraine’s is dismal. This of course is patently untrue as Ukraine’s last Fitch and Standard and Poor rating was positive. Kiselyov then leaps to the topic of Ukraine’s debt and declares that the only option for Poroshenko is either to flee Ukraine or go to war and blame everything on Russia.

The Ukrainian army is preparing for war; battalions of nationalists are getting ready for war Kiselyov declares and as proof of this alleged Ukrainian militarism Kiselyov shows footage of captured Ukrainian soldier Vasyl Zhemelynsky  who simply says that the planned rotation of soldiers to the front has not taken place yet. 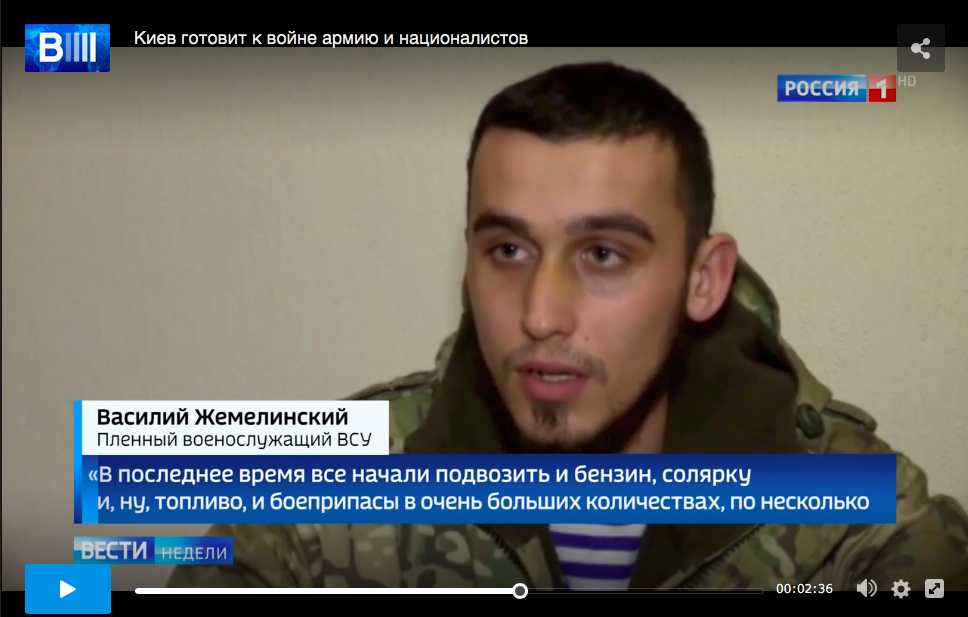 Upgrading and modernizing a country’s army is not preparation for war, it is the responsibility of the state to maintain an active military ready to defend the country from real or potetial threats.

In a recent Radio Liberty interview Ukraine’s military chief of staff Viktor Muzhenko said Ukraine was training its military to defend the country. “We have worked out several possible threat scenarios concerning Ukraine and we are preparing our troops to defend our country. We must be ready, today, tomorrow, in a week, a year or three years, until the threat of military aggression against Ukraine is no longer there” Muzhenko said.

His words were taken completely out of context and Lenta.ru declared that Ukraine was preparing for a full war with Russia.

Kiselyov continues in this warmongering vein and declares that Ukraine’s war effort will be aided by American weapons which Ukraine will receive free of charge. This claim is completely untrue, as Ukraine will pay for the arms.

On March 2 the US announced the sale of Javelin Missiles and command launch units for an estimated cost of $47 million. Both Ukraine and the US have reiterated countless times that any military aid granted Ukraine is purely defensive and intended to counter Russian aggression.

The size of Ukrainian pensions is another topic that Kiselyov brought up in last week’s show, claiming they were much smaller today than before the Maidan revolution, which in Kiselyov parlance is a state coup.