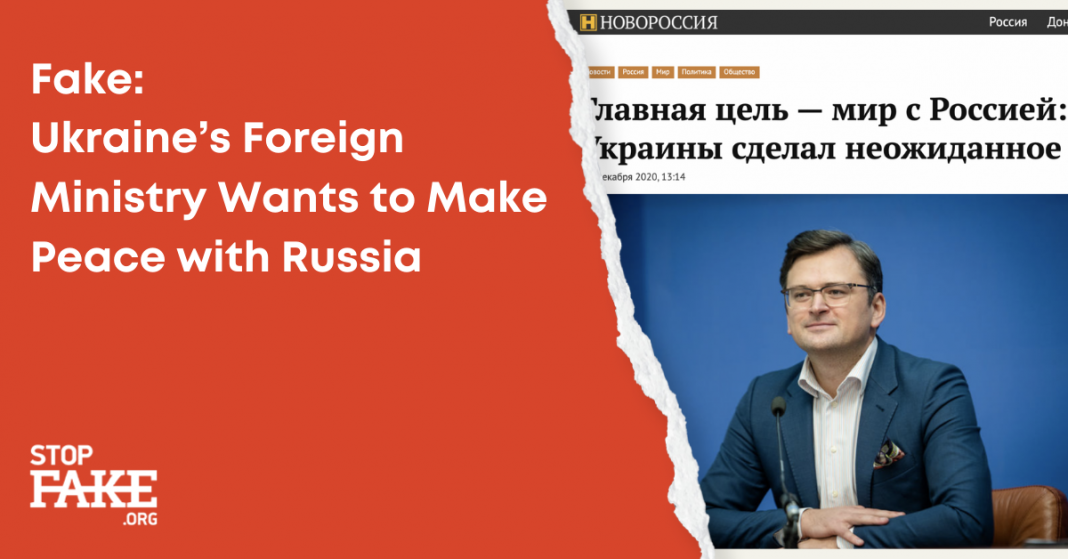 Peace with Russia is the main goal of the Ukrainian Foreign Ministry, declared scores of Russian media at the end of December, unleashing yet another disinformation onslaught aimed at Ukraine’s international relations sector. This latest wave of fakes appeared after Ukraine’s Foreign Minister Dmytro Kuleba ‘s year end briefing in which he outlined seven main priorities for Ukrainian diplomacy in 2021. Kuleba addressed the issue of Ukrainian-Russian relations in the context of the Kremlin’s aggression against Ukraine. Russian media, however, distorted his words and meaning, claiming that Ukraine had changed its tone and was expressing friendly plans and intentions towards Russia.

On December 16 Russian launched its first distortion of Minister Kuleba’s words about the need for a dialogue with Russia, claiming that he had “admitted” that without Russian Ukraine would have neither security nor prosperity. The avalanche of fakes intensified on December 24 after Kuleba’s year-end briefing in which he reiterated that Ukraine must have a strategy for its relations with Russia. Without such a strategy, he said, Ukraine can’t guarantee its security and develop its economy.

Kuleba addressed the distortion of his meaning by Russian media in his year-end briefing. He reiterated the need for a clear strategy towards Russia. “We need to learn how to live with the Russia that we have beside us. For this we must look at Russia very soberly and with a cold mind,” Kuleba said (See video 00:14:54-00:16:15).

Russian media took Kuleba’s words out of context and ran with a series of “sensational news items” about the minister’s alleged desire for peace with Russia, completely ignoring what Kuleba actually said about Russian aggression and the Kremlin’s destructive position. While Kuleba discussed the possibility of peace with Russia, he made it very clear that peaceful coexistence with Russia is possible only after the end of Russian occupation of Ukrainian territories and the return of Ukraine’s territorial integrity and sovereignty.

“Our short term goal in relation to the Russian Federation is to arrive at a principle of peaceful coexistence. There is a war between Russian and Ukraine – that is a fact. We must stop the war, restore peace to Ukraine and restore our territorial integrity. But we understand that Russia will not change just from this, even if we achieve this end, Russia’s strategic goals for Ukraine will remain the same – destructive and ruinous,” Kuleba said. (See video 00:16:55-0017:41)

Kuleba believes that a dialogue with the Kremlin is possible only after the end of Russian aggression against Ukraine.

According to Kuleba, Ukraine and Russia will be able to coexist if Russia realizes the inevitability of Ukrainian independence and accepts Kyiv’s western course. “This is a long term goal, when Russia realizes that Ukraine is part of the western world and only then can we move to the principle of coexistence, when we will just tolerate each other” Kuleba said.