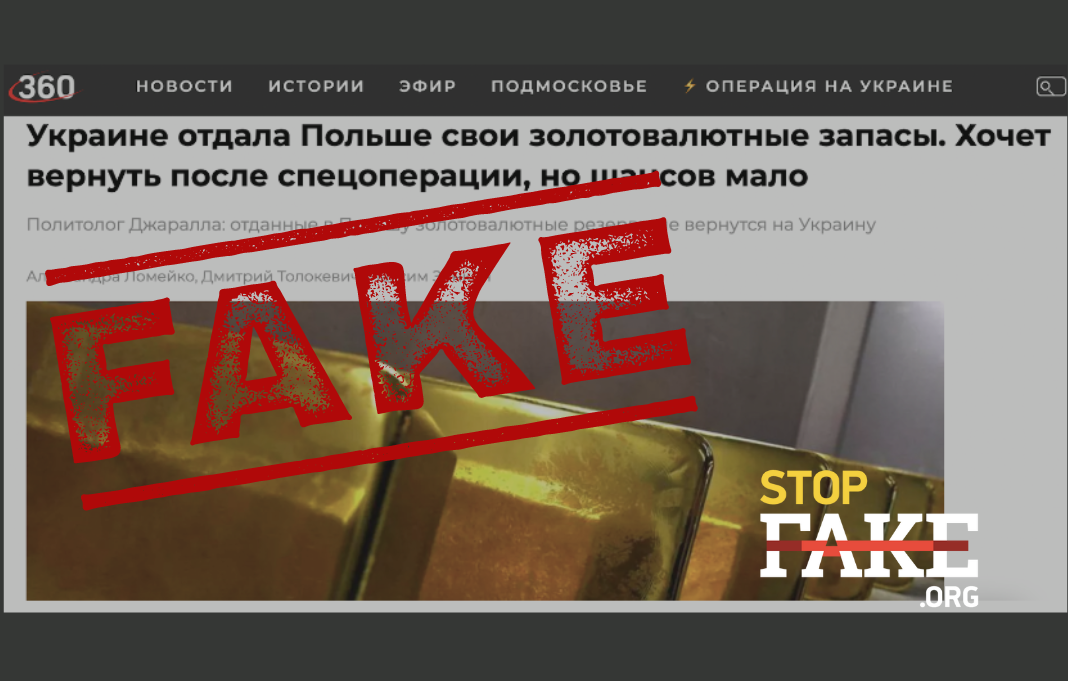 The Deputy Chairman of Ukraine’s National Bank never said that Ukraine transferred its gold and foreign exchange reserves to Poland. According to the Ukrainian National Bank, the reserves remain where they have always been, as different financial instruments in several international banks.

Russian media outlets such as Moskovskyi Komsomolets.ru, Svobodnaya Pressa, Komsomolskaya Pravda, 360tv, are reporting that Serhiy Nikolaychuk, the deputy chairman of the Ukrainian National Bank, allegedly admitted in an interview with Rabbit Hole magazine that Ukraine “transferred” its gold and foreign exchange reserves to Poland for storage “until the situation normalizes” and now it is unlikely that Kyiv will be able to return them back.

Rabbit Hole is an online magazine that presents itself as Asia’s magazine of ideas.

However, the hyperlink in the Kremlin media publications does not lead to the Nikolaychuk interview but rather to an article in a marginal Russian publication called Novyi Den (New Day), which refers to the Rabbit Hole interview, but does quote it or link to it. Another Russian publication, Moskovskyi Komsomolets does not mention the Nikolaychuk interview at all, but cites Illia Kiva, former Ukrainian parliamentarian who left Ukraine and now fully supports Russia and Vladimir Putin.

Novyi Den writes: “The Deputy Chairman does not specify how much gold and foreign exchange reserves remain in Ukraine. He also did not say how much was transferred to Poland for storage and how.”

StopFake located the Nikolaychuk interview with Rabbit Hole, Sergiy Nikolaychuk on the Economics of War which he gave at the end of June.

Although Russian propagandists actually use a real quote from the Nikolaychuk interview (“We rely considerably on international support for the accumulation of resources and financing”), they fail to provide the quote where he allegedly discloses the transfer of gold and foreign reserves to Poland. That is because Nikolaychuk did not say anything of the sort in this interview, or in any other interview for that matter. Ukraine’s gold and its foreign reserves are never even mentioned in this interview, which focuses entirely on the challenges facing Ukraine’s economy during war: ensuring price and financial stability, supporting the economy in Ukraine’s peaceful regions, foreign aid, etc.

To ensure that no changes were made to the text of the interview, StopFake checked the saved copies of the Rabbit Hole article using the web.archive.org service. The Sergiy Nikolaychuk on the Economics of War page has been saved 15 times over the past two months, including on June 30, the day the interview was published. There are no changes introduced in any of the saved copies, there is no “confession” about the country’s gold and foreign exchange reserves being taken from Ukraine for safekeeping in Poland.

Ukraine’s gold reserves are kept in the National Bank’s State Treasury, in accounts in foreign countries central banks and in commercial banks, including foreign ones. Ukraine’s gold and foreign exchange reserves are dispersed in different places, and they exist in different forms, thus excluding the assumption that the country’s entire gold and foreign exchange reserves were transferred in one swoop to Poland.

StopFake has debunked other Russian fakes concerning Poland and Ukraine, in particular the claim the President of Poland hinted that Poland was taking over Ukraine.