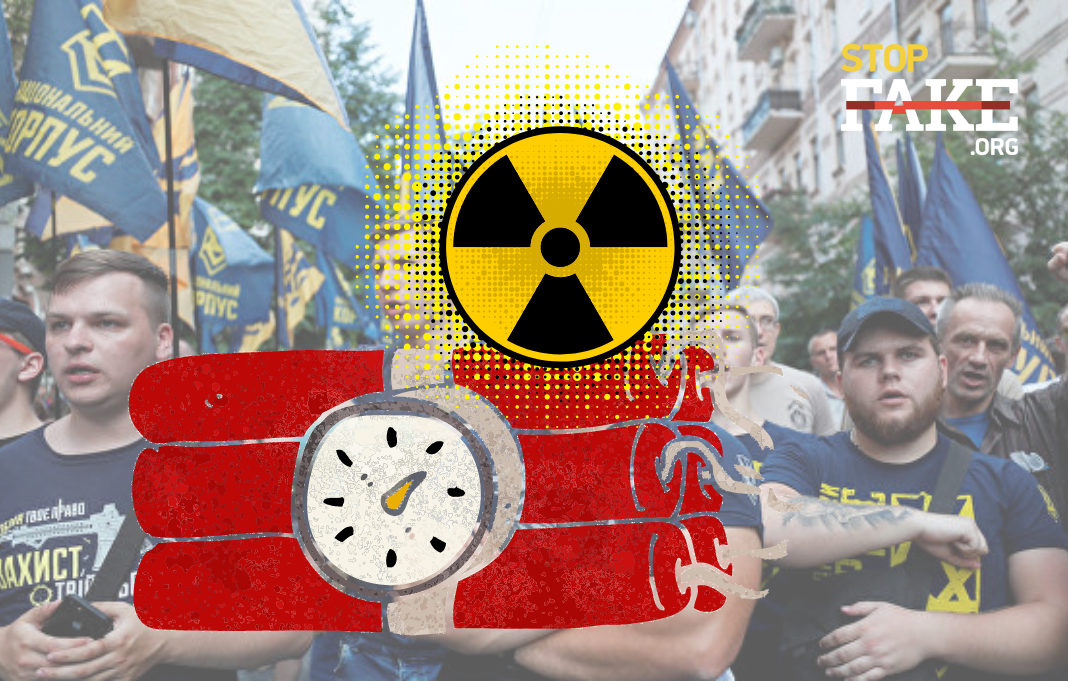 On February 4 pro-Russian Telegram channels published a barrage of stories claiming that members of the National Corps political party are preparing a radioactive explosive device to be used against Russian forces should they again invade Ukraine. Similar claims were also disseminated on the Voyennyi Obozrevatel (Military Observer) Telegram channel together with a video featuring the alleged home-made explosive device. The device is described as a “dirty radioactive bomb” and the accompanying video which contains the National Corps logo, explains that the video was prepared for internal use.

Checking the authenticity of the video, which does not have any audio, one immediately notes countless linguistic errors in the subtitles. There are at least five mistakes where instead of Ukrainian words, Russian ones are used. Such language mistakes are not typical to Ukrainian native speakers, particularly nationalists.

In the video, the person who is handling the “dirty radioactive bomb” is doing so without wearing any protective clothing, only gloves. Radioactive materials used in explosive devices have high levels of radiation. Surely if this video was authentic and the alleged bomb was real, the person handling it would wear appropriate protective clothing. The video also shows what appears to be a Geiger counter reading 47.59 on its screen. According to a nuclear chemistry expert, the gadget is a MKS-05 radiometer that measures radioactive rays, whose brand name was covered in the video. The radiometer is used to measure radiation in industrial plants, in environmental research, to check radiation levels in living quarters, in garden soil, and on transport. This is not the type of Geiger counter that would be used in a high radiation concentration case.

The National Corps issued an official statement disputing the claims the party was planning a dirty bomb attack. “This video is a poorly made fake and this entire story is a product of Russians’ sick imagination in order to discredit both our party and Ukraine in general” the statements states.

The Ukrainian military, Territorial Defense and other volunteer units are constantly targeted by Russian disinformation attacks. A recent fake about an alleged chemical attack by the Ukrainian military in Donbas remains pervasively popular and continues to be constantly regurgitated in Russian media, most likely because the Russian Defense Minister Sergey Shoigu who the one who first articulated this fake. Fakes claiming that Ukrainian servicemen are aggressive towards Donbas locals and constantly violate the ceasefire are another Russian disinformation constant.

National Corps representatives believe that this fake video was a response to the “Do not panic! Get ready” campaign the party has launched to prepare the country’s civilian population for a possible full-scale Russian offensive.

In the last week two major American newspapers, the New York Times and the Washington Post reported that US intelligence had received information about Russia’s plan to fabricate a pretext for invasion using a fake video showing an attack by the Ukrainian military on the Russian Federation or on Russian speakers in Donbas. Such videos, which are part and parcel of Russia’s misinformation strategy against Ukraine, are all aimed at discrediting Ukraine.