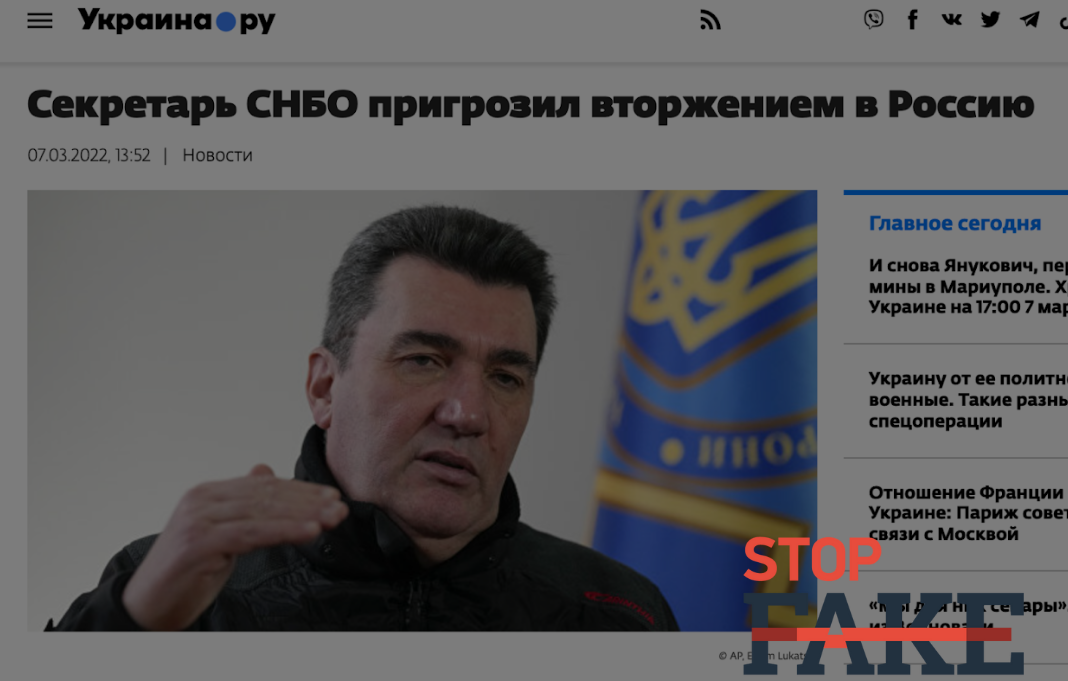 Ukraine is a peaceful country that doesn’t need others’ territory, and unlike Russia, has never attacked any of its neighbors.

Russian propagandist media continue pedaling fakes about the mythic “Ukrainian aggression against Russia”, this time ratcheting the rhetoric to a fever pitch – declaring that Ukraine’s leadership threatened to “capture” Russia. Citing a “decision” by Ukraine’s National Security and Defense Council, they claim that “Ukraine could begin an invasion of Russia.”

“In particular, intimidation is directed at people who are the decision makers in Russia” they write.

This fake story is based on a Facebook post by the chairman of Ukraine’s National Security and Defense Council Oleksiy Danilov. In the post Danilov does not suggest that Ukraine should “capture” Russia, the post is devoted to the future prosecution of the Russian leadership for their bloody crimes committed in Ukraine. Danilov points out that Russia is consciously disregarding international law, however, justice will catch up with the aggressor who launched a war on Ukraine.

Danilov points out that Russia is carrying out scorched earth tactics in Ukraine, killing peaceful civilians, carrying out indiscriminate bombings of residential areas and committing other war crimes against civilians. Danilov is convinced that “the future tribunal on Russian criminals will be significant for the whole world and for Russia itself, as the war with Ukraine, among other things, has launched a process of liquidation of the Putin regime itself.” The Russian leadership issuing criminal orders cannot hide from justice, and they will be punished, he writes.

Never fight with Ukraine, our people have gone through inhuman trials for thousands of years, ground multiple empires, and only became stronger and more resilient, the same will be this time! ou will not hide anywhere: neither behind the fences of your houses, nor on villas in Miami, nor yachts in Seychelles or a bunker in the Urals. We will find and come for you either as after Eichmann or Bin Laden, Danilov writes.

Ukraine’s National Security and Defense Council Secretary did not declare any threats of invasion of Russia, he wrote only about the criminal punishment of all persons involve in the attack on Ukrainian territory. Oleksiy Danilov also emphasized that Ukraine is recording all the bloody act Russian troops are committing on Ukrainian territory.

“Your crimes are documented, and the memory of them is hot iron in your hearts. Both those who gave orders and those who carried them out aiming for a missile strike on our peaceful cities are on our list,” Danilov concludes.