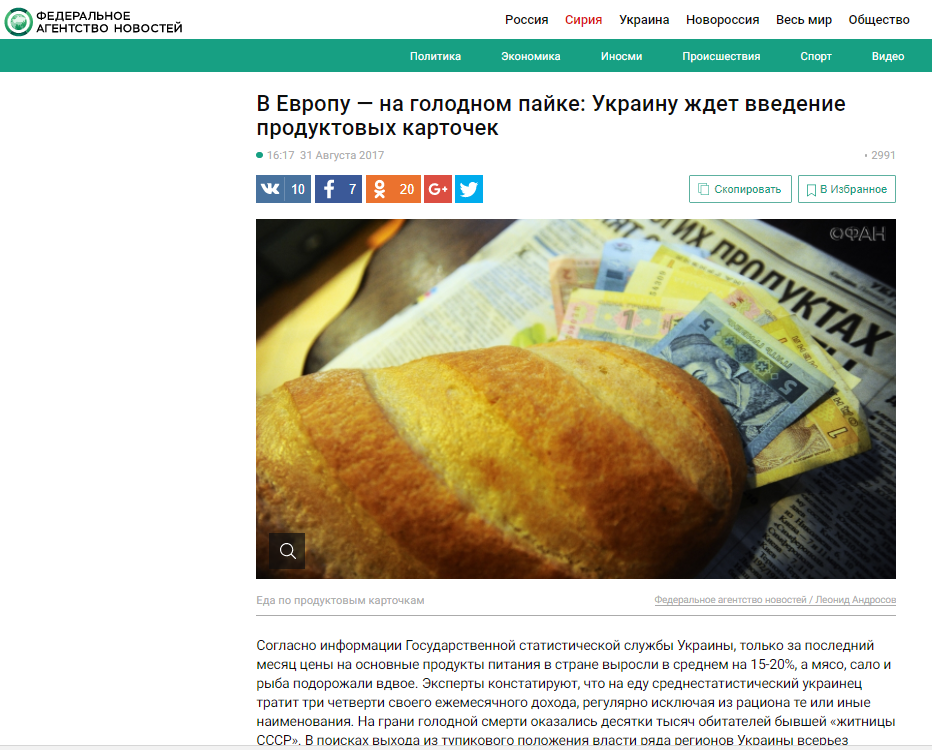 At the end of August Russia’s Federal News Agency  (RIAFAN) published an article claiming that Ukraine was poised to introduce food ration cards. Citing Ukraine’s State Statistics Service, an organization that tracks consumer prices, economic changes and inflation, the agency claims that the price of basic food products increased by an average of 15-20%, while meat and fish have doubled in price. According to the Ukrainian State Statistics Service, milk, cheese, eggs and fish have gone down in price in recent months while meat prices rose by 5%.

The story is filled with value judgments without any factual evidence to support its claims. “Tens of thousands of people living in the former breadbasket of the USSR are on the brink of starvation. In an effort to alleviate the situation the authorities are seriously considering introducing ration cards and special coupons and simultaneously limiting the amount of food purchased.”

The story cites Marina Fedirko, a Social Security employee from an unnamed small city in the northern Chernihiv oblast who purportedly showed the Federal News Agency a list of impoverished local residents who must now rely on welfare help. Another person quoted in the article is identified as an activist called Vladislav Terenchuk from something called Ukraine’s Consumer Association, who calls the food situation in Ukraine catastrophic.

All Ukrainian federal and local government employees must file declarations, their names and places of employment are all available on the Internet. There is a Marina Fedirko in that system, but she is from Cherkasy oblast and not from Chernihiv and works in the State Cadaster Service, which registers property. There is no such organization as Ukraine’s Consumer Association and we were not able to find anyone named Vladislav Terenchuk.

The entire story is made up of fake people saying fake things. Last year StopFake debunked a similar fake story disseminated by the Russian Defense Ministry television channel Zvezda claiming hungry Ukrainians were snatching bread out of the beaks of pigeons in city centers.