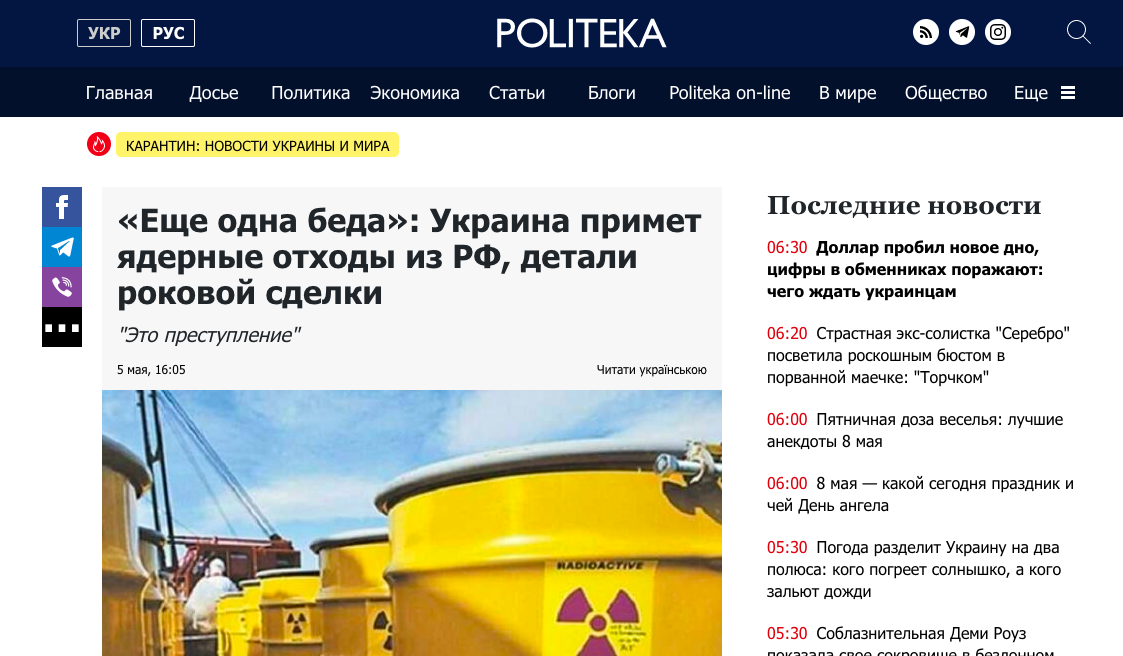 A fatal deal, another disaster, the next catastrophe – these are just some of the epithets Russian and Ukrainian propagandist media have resorted to in their reactions to the news that Ukraine will build its own repository for high level nuclear waste.

Ukraine agrees to store nuclear waste from Russia, repository for Russian nuclear waste to be built in Chornobyl, these and other distorted headlines and outright fakes were filling up Ukraine’s information space last week. Ukraine is obliged to accept this nuclear waste in accordance with an agreement about nuclear cooperation signed with Russia back in 1993 claims yet another publication.

Russia will send reprocessed nuclear fuel and waste back to Ukraine already this year, something that is mandated by the Joint Convention on Spent Fuel and Radioactive Waste Safety which Ukraine ratified in 2000. According to the Convention, which applies to all countries that use nuclear energy, each country is ethically and legally responsible for its own nuclear waste, therefore the default position is that all nuclear waste will be disposed of in each of the countries concerned. With this year’s completion of a central spent nuclear fuel storage facility and the construction of a storage facility for high level nuclear waste, Ukraine will be in full compliance of the Convention and will no longer have to rely on Russia in this field.

The existing spent nuclear fuel management scheme was established in the days of the Soviet Union, when nuclear power plants and spent nuclear fuel reprocessing facilities were located throughout the USSR. That is why Ukraine is completely dependent on Russia for nuclear waste management and the Kremlin can use this situation at any given moment to exert further pressure on Kyiv. This is precisely what happened in the early 1990’s when Russia would not accept Ukrainian spent nuclear fuel for three years. At that time Ukrainian power plants were on the verge of shutting down because of overfilled storage facilities.