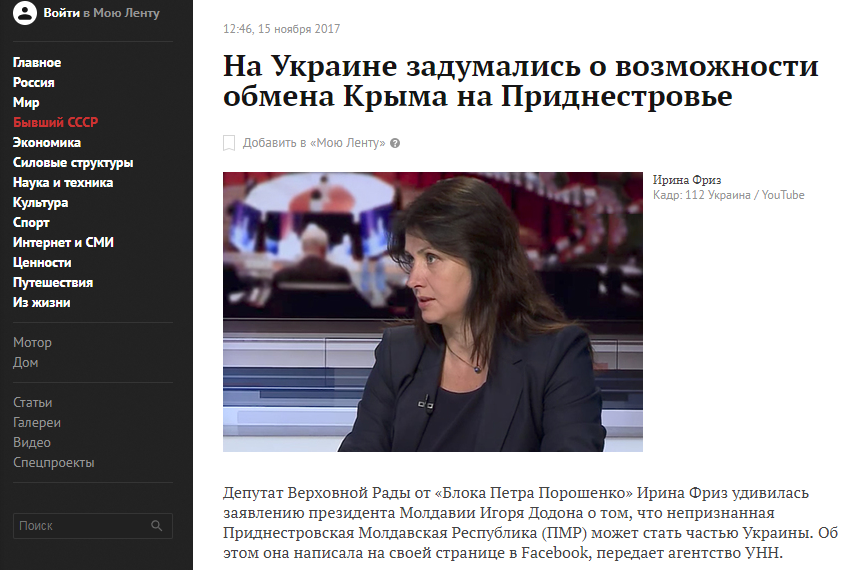 Pro-Kremlin media were busy last week disseminating a fake story claiming that Ukraine is considering the possibility of trading Russian annexed Crimea for Trandsnistria, the pro-Russian breakaway region of Moldova that is home to some half a million people. The source for this latest foray into geopolitical fantasy was a comment by a Ukrainian member of parliament, who in turn was reacting to something the Moldovan president said.

While visiting Moscow, Moldova President Igor Dodon gave an interview to the Russian daily newspaper Nezavisimaya Gazeta focusing on the problem of Transdnistria. In case Moldova loses its statehood, Transdnistria must be given the right to self-determination, Dodon said. He outlined two scenarios: Transdnistria could become a part of Moldova or a part of Ukraine, as outright independence or becoming part of the Russian Federation are unrealistic prospects for the breakaway territory.

The Moldovan President is widely considered pro-Russian and his political platform is staunchly against European integration for Moldova. After he declared that Transdnistria must choose if it wants to go with Moldova or Ukraine, analysts began speculating if the idea isn’t actually a Russian project intended to influence Ukraine. Writing for the Ukrainian internet publication Apostrof military expert Oleh Zhdanov posited that Transdnistria joining Ukraine on a federation basis would create a precedent for the self-proclaimed separatist Donetsk and Luhansk People’s republics.

Responding to Dodon’s interview, Ukrainian MP Iryna Friz posted a response on her Facebook page expressing incredulity at his proposition, particularly in light of the fact that Ukraine has always considered Transdnistria an integral part of Moldova. Friz wonders if perhaps Dodon’s suggestion is a signal from the Kremlin on trading Transdnistria for Crimea and advises him to spend more time defending the territorial integrity of Moldova and less time making dubious proposals. 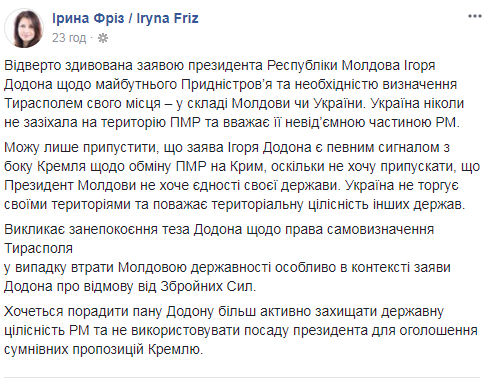 In 2011 then president of Transdnistria Igor Smirnov suggested that the enclave could hold a referendum on joining Ukraine.

In her post, Ms. Friz does not advocate that the breakaway region join Ukraine, quite the contrary, she unequivocally states that Ukraine respects the territorial integrity of other countries.

Recently, Russian propaganda increasingly portrays the annexation of the Crimea as a fait accompli, pushing the idea that Ukraine must accept this and consider putting an end to the issue in return for receiving some compensation from Russia – perhaps gas or money, or someone else’s territory.