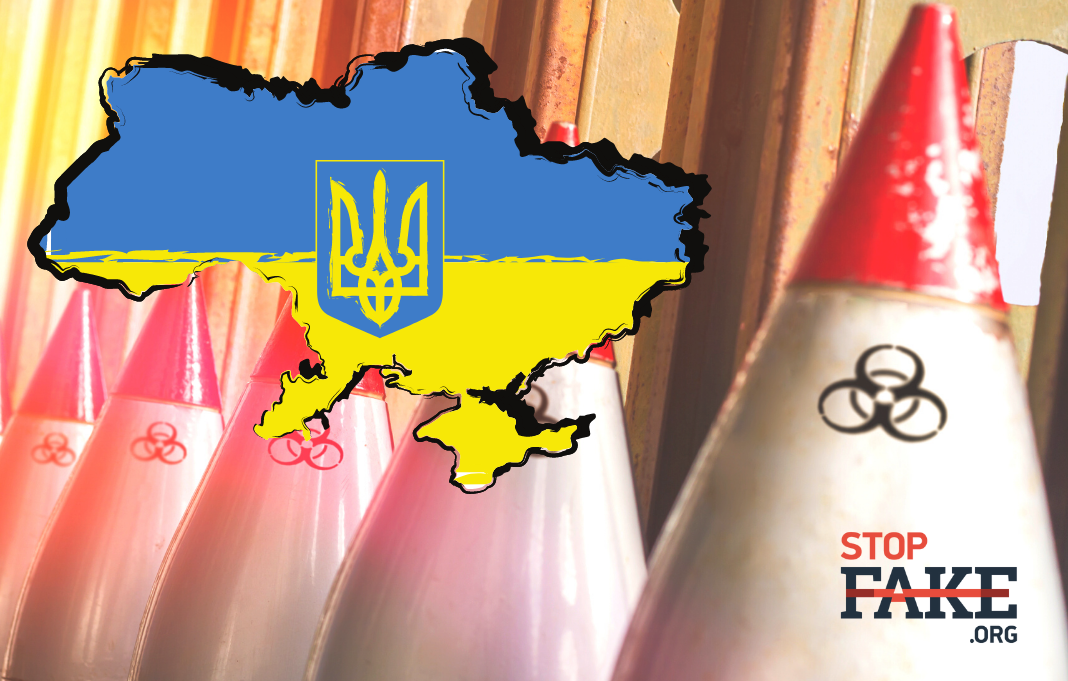 Ukraine currently has no nuclear weapons, and the international community has never recorded any attempts on the part of Ukraine to develop them. Nevertheless, it is very important to the to convince its own citizens and the world that Ukraine poses a threat to Russia.

Citing an unnamed source, RIA Novosti, RT, TASS, Interfax and other prominent Russian media are featuring stories claiming that Ukraine was allegedly preparing to develop its own nuclear weapons. Russian President Vladimir Putin and Foreign Intelligence Service chief Sergei Naryshkin have made similar claims earlier, Naryshkin said that the opportunities to create nuclear weapons “are much higher in Ukraine than in Iran or North Korea.” The Russian government is seeking to draw parallels between Ukraine and Iran, which has been subject to Western sanctions for its attempts to develop nuclear weapons.

RT claims that right after Ukraine joined the Non-Proliferation of Nuclear Weapons Treaty (NPT) in 1994, Kyiv immediately began work on forming a technological basis for developing its own nuclear weapons. Similar claims based pm Russian propagandist media’s “own sources” with “insides from competent Russian authorities” confirming such claims are now actively being disseminated.

In 1991 Ukraine had the world’s third largest nuclear arsenal, however, the Ukrainian government gave up that arsenal, on June 2, 1996 the last nuclear warhead was removed from Ukraine and moved to Russia. Ukraine became a non-nuclear state in 2001 when the last intercontinental solid-propellant missile launcher was disposed of. The 1994 Budapest Memorandum, signed by Russia, Great Britain and the United States provided Ukraine with security guarantees following its accession to the NPT. In 2014 Russia first invaded Ukraine, violating all security agreements, including the Budapest Memorandum. Even after this Russian violation of an official agreement, Ukraine never called for a restoration of its nuclear status.

It was only on the eve of Russia’s war against Ukraine on February 19, 2022 that President Volodymyr Zelensky said if Kyiv had no security guarantees, then “Ukraine has the right to consider the Budapest Memorandum as unbinding and all other 1994 agreements that are part of that memorandum to be called into question.” Russian leader Vladimir Putin immediately used Zelensky’s pronouncement to his advantage, adding a potential nuclear threat to his list of absurd arguments and demands for the recognition of the militant Donetsk and Luhansk client statelets and his justification for starting a war in Ukraine.

According to the Kremlin media, Ukraine was allegedly preparing the Chornobyl exclusion zone as a site for the development of nuclear weapons, work was underway to produce a dirty bomb and to isolate plutonium. The increased radiation levels in the zone would mask the nature of such work, according to RT.

Chornobyl’s reactors were completely shut down 22 years ago and the International Atomic Energy Agency (IAEA) monitors the situation around the Chornobyl plant closely and regularly visits the facility and issues reports on its findings. There have never been any suspicions about nuclear weapons development in Ukraine reported or noted by the IAEA.

IAEA Director General Rafael Grossi refuted Russian accusations that Ukraine posed a potential nuclear threat: “We have absolutely no information which would cause us to doubt that Ukraine is not abiding by its non-proliferation agreements” Grossi said.

RIA Novosti reports that its “source” says that “research on creating a nuclear explosive device that could be used to construct nuclear warheads was being conducted with both uranium and plutonium. Ukraine’s scientific community has enough experience to create an implosive and an artillery type device”.

According to Russian publications, the center in charge of this alleged nuclear research and development is the Kharkiv Physics and Technology Institute.  But Ivan Karnaukhov, a PhD in mathematical physics and a member of Ukraine’s Academy of Sciences made it very clear way back in 2012 that “the amount of enriched uranium that the Institute has is enough for scientific purposes, but much less than what is needed to make nuclear weapons”.

As for uranium mines in Ukraine, it is true that Ukraine has 12 explored endogenic uranium ore deposit areas, but only four of them are currently in operation. Uranium ore is processed in the Zhovti Vody Mining and Processing Plant, a plant that Russian media now claim is processing uranium ore for nuclear weapons.  Some 1,000 tons of uranium are mined in Ukraine annually, all of it is used in Ukraine’s nuclear power plants, currently providing 40% of those plants’ uranium needs.

Energoatom, the Ukrainian state company that operates all of Ukraine’s nuclear power stations is also supplied with nuclear fuel by the American company Westinghouse under a long-term contractual agreement. Ukraine does not enrich uranium to the level required for nuclear weapons. If such enrichment was taking place anywhere in Ukraine, it would not only be terribly risky but also impossible to keep secret.