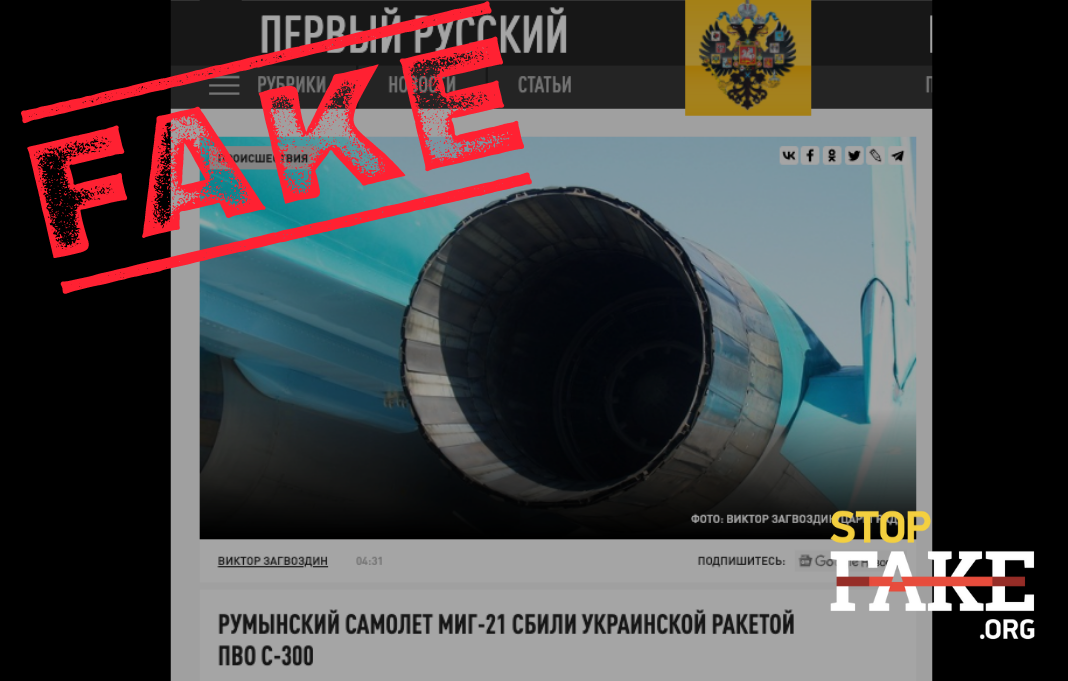 The Russian propaganda machine, citing “official” Romanian sources, is disseminating a fake story claiming that a Ukrainian missile shot down a Romanian MiG-21. Romania’s Ministry of National Defense immediately ruled out such a scenario.

On March 2 the Romanian Air Force suffered two tragic events, the crash of a MiG-21 Lancer and a Puma helicopter. Since the crashes, pro-Kremlin media have been working extra hard to connect Ukraine to the fatal accidents. Tsargrad, Pravda.ru, Podmoskovyie segodnya, NewsFront and others are claiming that a Ukrainian rocket brought down the plane.

“Romania officially said that the MiG-21 was shot down by the Ukrainian military. It was shot down with a missile, probably an S-300,” writes NewsFront. No one is named as a source, there are no links to any Romanian statements to that effect.

The Romanian fighter jet crashed on Wednesday evening, March 2 near the city of Constanza on the Black Sea coast. Pro-Kremlin publications reacted with identical texts published a week after the accidents, the fakes continue to be spread even after Romania officially refuted the claims that a Ukrainian missile had brought down the MiG.

The fighter jet and the helicopter crashed on the same day. The Mig-21 crashed during an air patrol in the Dobrogea area. The helicopter sent on a search and rescue mission also crashed.

Romanian Defense Ministry Spokesman Brigadier General Constantin Spinu, speaking to the Romanian newspaper Biziday said that any connection between Ukraine and the crash of the Mig-21 and helicopter was out of the question. “The Military Prosecutor’s Office launched an investigation that will establish the exact cause of the accidents and any other information about this will be reported only by prosecutors” Spinu said.

By blaming Ukraine for the crash of the Romanian MiG, the Russian propaganda machine is trying to provoke a conflict between Ukraine and Romania and involve Ukraine’s neighbor – a NATO country in the conflict to legitimize the Kremlin’s propaganda narrative – that the attack on Ukraine is to oppose the West and Nato.

According to the military aviation website The Aviationist, the airspace around Costanta is one of the most well-guarded in the region, with several NATO aircraft, are deployed to the area. On the day of the two crashes, the weather was reportedly quite bad, with snow and rain and a low ceiling. “The bad weather and the darkness may have contributed to one or both incidents. Without forgetting that despite the upgrades, the MiG-21 Lancer remains a quite old aircraft” the Aviationist notes.