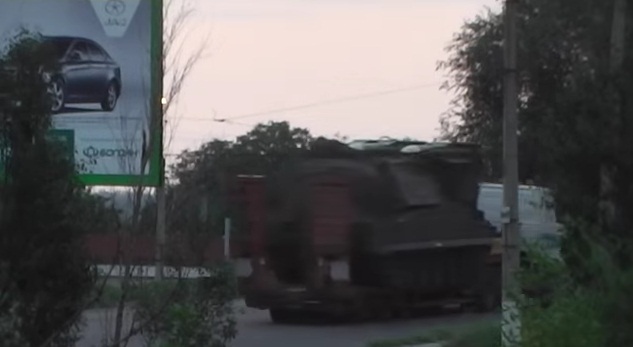 On July, 18 on his Facebook page Minister of Internal Affairs of Ukraine Arsen Avakov published the video message about covert surveillance units recorded a transportation of an air defense missile system “Buk” through the city Krasnodon of Luhansk region in the direction of the Russian border. Also this message was posted on the Interior Ministry website.

“On the video one can see uncovered missiles. Two missiles are in place – the middle third one is not visible “- Avakov refined.

After the publication a huge number of messages emerged in social networks and news websites which claimed that the equipment on the video is not moving through Krasnodon, but through Krasnoarmiysk of Donetsk region, controlled by Ukrainian military.

And dozens of other websites, blogs and social networking accounts.

Let’s analyze the reasons that the Russian media and bloggers used against Ukrainian version of the Internal Ministry.

Vesti.ru writes: “As to the specific video, which allegedly captured Russian” Buk “which was secretly smuggled from Ukraine, this fake has been exposed. Inadvertently for those who made the fake, one can see a billboard on the video, which proves that the route by which “Buk” travels, passes Kranoarmeysk which has been controlled by Ukrainian troops from May 11. Thus, Avakov posted Ukrainian “Buks” in Facebook, which are passing through the territory controlled by the Ukrainian authorities. This is an elementary fake “- the chief editor of the magazine “National Defense “Igor Korotchenko reported to channel “Russia 24”.

At the same time Russia Today adds that it is visible the dealership address Krasnoarmeisk, Dnipropetrovskaya street, 34 on a billboard.

Actually, it is absolutely impossible to see any address on the billboard. Picture is fuzzy, the camera is in motion, and a significant part of the inscriptions on the billboard is covered by trees. However, at the same time one can see clearly the trolleybus wires. In Krasnoarmeisk there are no trolleybuses. In Krasnodon, which Avakov wrote about, there are. StopFake does not claim that the video really been made in Krasnodon, but there are no evidence to suggest otherwise.

Then Russia Today writes: “While the Ukrainian media reports that rebels “cover their tracks” after shooting Malaysian airliner, Internet users have identified the street where the anti-aircraft system passes on the video. This is Gorky Street, Krasnoarmeisk. Currently, the city is under the control of the Kyiv authorities. ”

To confirm the abovementioned, RT demonstrates this picture of “Buk”: However, there is no frame like that on the video. It becomes clear why RT put this picture after reading information from other websites, which state that this “Buk” also allegedly missing one of the missiles. This is not true for two reasons: first, the photograph clearly shows that all available to the eye missiles are in place, and secondly on Avakov’s video the missing rocket is on the opposite side of the unit, which in this picture is not visible.

Also, the Russian media and bloggers drew attention to the vehicle-borne number of “Buk” from this picture – 312. They wrote that the antiaircraft emplacement with the same number has repeatedly been seen as part of Ukrainian military convoys.

However, on the video published by Avakov “Buk” vehicle-borne number is not visible at all. Therefore, this argument does not relate to the antiaircraft emplacement in question.