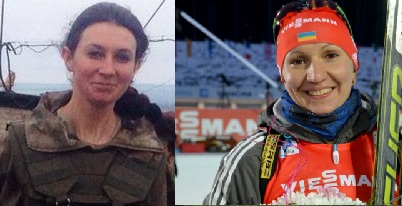 She is described as a sniper working in Sloviansk and is said to kill children there. (It bears reminding that Stopfake has already repeatedly written about faked photos of children, alleged to be killed in Sloviansk). As a proof, networkers publish a photo of a woman that even do not bear resemblance to the biatlonist. This woman’s shape of ears, nose and eyes and neckline differs from those of Olena. Besides, “analysts” recalled that once in an interview Pidhrushna said the following: “The best snipers are biathlonists. That is why we could be summoned any time”. These words appeared in media on May 31, during the battles in the south-east of Ukraine. Olena Pidhrushna said this phrase confirming that she had bought “military” bonds aimed at supporting Ukrainian army. However, this interview is just one more proof that at that moment Olena was in Kyiv, not on Karachun mountain.

The rest of proofs, provided by “accusers”, are still more arguable. For example, networkers remind that Olena’s husband is the Svoboda Party member of Ukrainian parliament Oleksiy Kayda. They also recalled that Olena refused to take part in the competition in Russia because of Russian Federation actions in Crimea. But all these statements by no means can be considered as proofs for her participation in the ATO.

In addition, commenting this situation to Obozrevatel, Olena Pidhrushna said that she had already seen these statements and that she was shocked by them. She denied emphatically all the fantasies and confirmed that she was in Kyiv in these latter days.

“Taking into consideration that currently I am completely involved in the work at Ministry, in the work with children and sportsmen, this information shocked me and stirred up a feeling of injustice. My parents calmed me; they said not to pay attention to such nonsense, but to go in for my work. These are fantasies without any sense and absolute gibberish. Yesterday, and today, I have been participating in gala-concerts and sport festivals in Kyiv. Nobody ever proposed me to take part in the ATO”, stated the sportswoman.

“In my opinion, this is the part of Russian propaganda. For the first time this information was spread by LifeNews, and they can take any man and pass him for another. Perhaps, these “journalists” decided to recall the old story about Baltic biathlonists, who had allegedly fought in Chechnya”, added Pidhrushna.