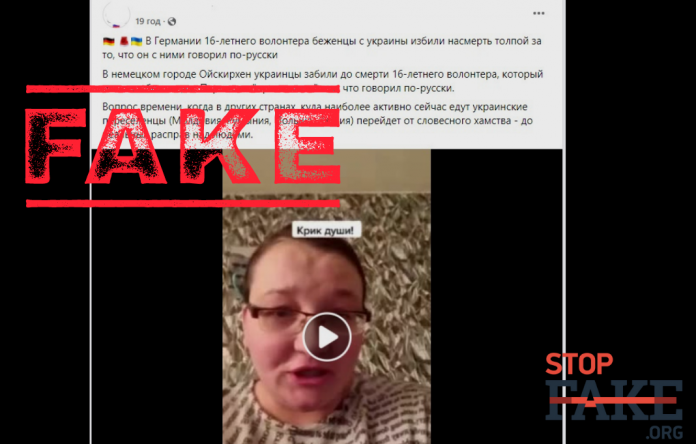 This story is a complete fabrication. North Rhine-Westphalia and Euskirchen police have said there were no crimes of this nature committed anywhere in or around Euskirchen.

A video is making the rounds on Facebook in which a Russian-speaking woman says that a crowd of refugees from Ukraine allegedly beat a 16-year old Russian boy to a pulp in the German city of Eurkirchen in the western German state of North Rhine-Westphalia. As a result of the beating, the boy died. The woman says she heard the story from a friend. In another video this same woman calls on Russian speakers to do something about the “khokhly” who were allowed to enter Germany. Kokhly is a Russian derogatory term for Ukrainians.

Responding to the video some viewers write threats against Ukrainians and predict Ukrainian reprisals: “It is only a matter of time until Ukrainian refugees in other countries where they are most actively going now (Moldova, Romania, Poland, Latvia) will move from verbal rudeness to real reprisals against people.”

This story is a complete fabrication.

After these videos began to be massively reposted on social media, the North Rhine-Westphalien police issued a statement saying there were no such crimes committed in or around Eiskirchen, nothing remotely resembling the incident described in the video had taken place. “Experts say this video is a fake intended to incite hatred. We ask you not to share this video. Please check all information very carefully for accuracy, especially information from social media networks” the Bonn police tweeted.

Because this fake video was probably disseminated with the intent of inciting hatred, this case was also examined by the Bonn police State Security Service.

Local media reported that police were able to identify the woman in the video. She admitted that this story is false. It is also unclear if this woman actually believed this false story, or if the video was designed deliberately to stoke hate.

It is also worth noting that Alina Lipp, a “freelance journalist” of Russian-German origin, shared this story with more than 100,000 subscribers on Telegram. Previously, the German media described her as a “Putin soldier” in the information war – Lipp was repeatedly caught spreading disinformation about the situation in Ukraine and the war in Donbas.

As a result of Russia’s war against Ukraine, more than 210,000 Ukrainian refugees have arrived in Germany. According to the UN High Commissioner for Refugees, the war has forced more than 3.4 million Ukrainians to leave their country in search of safety, protection and assistance.

Previously StopFake refuted disinformation claiming that almost all refugees from Mariupol wished to go to Russia.