Ukrainians from different countries are calling for the lifting of sanctions against Crimea, several Russian media outlets declared last week. 15 representatives of Ukrainian emigres from various countries announced that unification of the peninsula with Russia must be recognized, Komsomolskaya Pravda claimed. 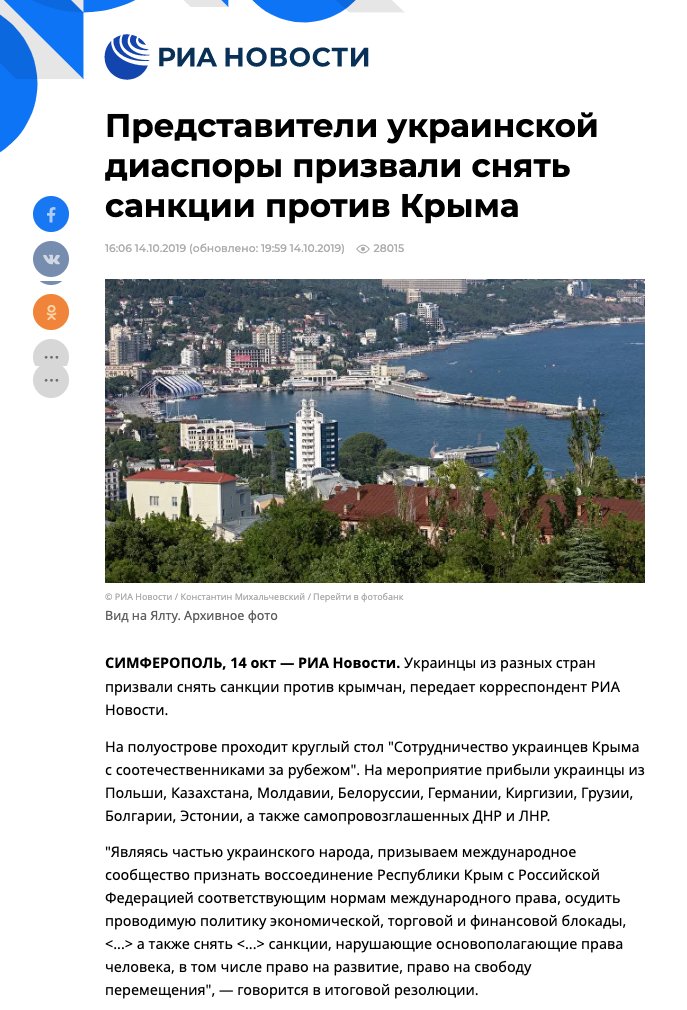 Not one organization representing the Ukrainian diaspora has made such a claim, quite the contrary, Ukrainian emigres speak with one voice about Russia’s illegal occupation of Crimea and continue to call for increased international pressure on Russia.

Last week Russian occupying authorities held a round table in Crimea entitled Cooperation of Crimean Ukrainians with compatriots abroad, calling the event a meeting of the Ukrainian diaspora. Among the 15 participants from abroad who came for this round table, are representatives from several post-Soviet countries and from the self-proclaimed Donetsk and Luhansk People’s Republics, Russian supported separatist enclaves in eastern Ukraine.

The round table resolution, on which Russian media have based their fake stories, claims that Crimea is an example of the respectful and proper handling of the issue of interethnic relations between Russians and Ukrainians. It also urges the international community to recognize the reunification of Crimea with the Russian Federation in accordance with international law, to condemn the current policy of economic, trade and financial blockade of Crimea and to lift the sanctions levied against Crimea.

The World Congress of Ukrainians, the largest public organization of Ukrainians living outside of Ukraine has repeatedly condemned the illegal annexations of Crimea and continues to call for extended sanctions to increase pressure on Russia.

We also call upon the international community to intensify the pressure on Russia, including heightened sanctions, to accelerate the de-occupation of Crimea, and the release of Oleh Sentsov and all 70 Ukrainian political prisoners who opposed Russian aggression, particularly in Crimea, and the 24 imprisoned Ukrainian sailors, reads the Congress’ statement from May 2019.

This is not the first time that pro-Kremlin media have tried to create the illusion of international support for the annexation of Crimea. StopFake has debunked such claims in the past.