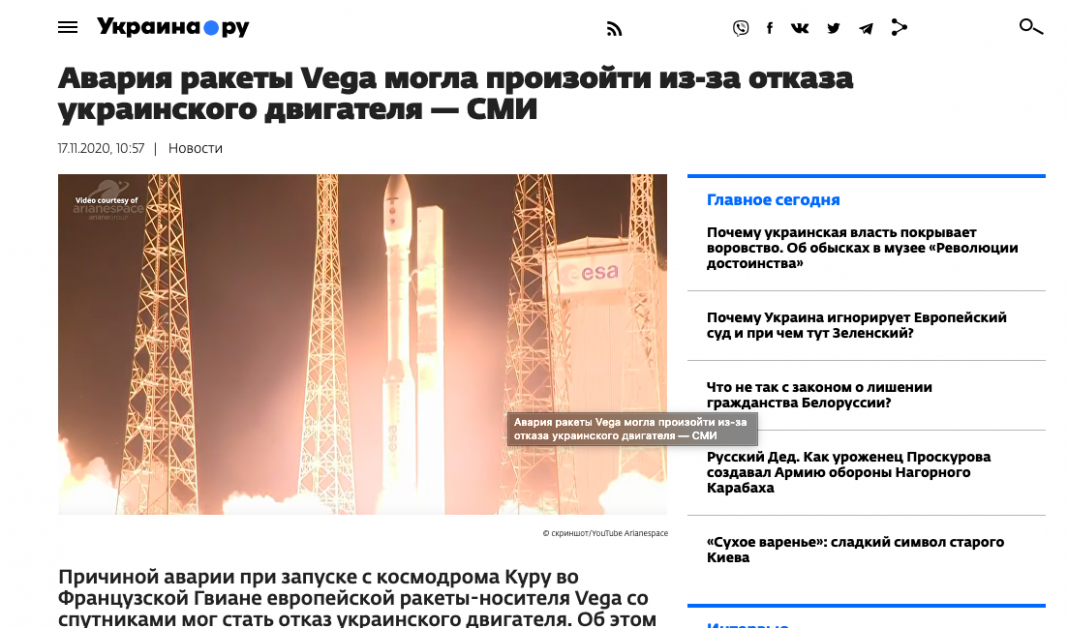 The Arianespace company announced that the crash of their Vega VV17 mission was caused by human error. The upper stage of the launch rocket went out of control because incorrectly connected cables and not due to Ukrainian engine malfunction.

Ukrainians buried the European missile, Russian media announced after the November 17 European Vega launch failed at the Guyana Space Center in Kourou, French Guyana. On the eighth minute of the flight, the fourth stage of the rocket which was equipped with a Ukrainian-made engine deviated from course and crashed. Without waiting for official data about the crash, Russian media rushed to blame Ukraine for the crash, alleging that if the Ukrainian engine caused the mishap, this would be another nail in the coffin of Ukraine’s high tech industry.

The commercial space company Arianespace Vega VV17 mission crashed on the night of November 17 at the Kourou launch station. The first three stages of the four stage Vega launcher were operating normally, having separated from the rocket on time. The fourth stage called AVUM ignited eight minutes into the launch, at which time Vega lost control, stopped responding to commands and departed from the assigned orbit. It is the AVUM module that carries the liquid propellant rocket engine developed by the Ukrainian engineering firm Pivdenne and built at the Dnipro rocket factory Pivdenmash. The failure caused the loss of Vega’s payload, two spacecraft, the SEOSAT-Ingenio Earth observation satellite for Spain and the TARANIS satellite for France to study electromagnetic phenomena in the upper atmosphere.

The failure of the AVUM booster launched a wave of misinformation in the Russian and also in some Ukrainian media, which immediately declared the Ukrainian engine responsible for the crash. Some media even claimed that Pivdenmash had confirmed that their engine could have caused the Vega crash. Pivdenmash dismissed these claims saying in a statement “that attempts by biased and unscrupulous media to make Pivdenmash responsible for the accident are unfounded.”

After analyzing the mission telemetry Arianespace announced the reason for the crash was human error. Arianespace chief technical officer Roland Lagier explained that cables to two thrust vector control actuators were inverted and commands intended to go to one actuator went instead to the other, triggering the loss of control.

“This was clearly a production and quality issue, a series of human errors, and not a design one,” Lagier said.

The mythical Ukrainian engine design defects that Russian media were pedaling  were clearly not responsible for Vega’s crash.

Arianespace has been using Ukrainian engines in its launches since 2012. During this time not a single Vega launch vehicle has crashed because of engine malfunction. 86 spacecraft have been successfully launched into orbit for customers from all over the world with the help of Ukrainian made engines.