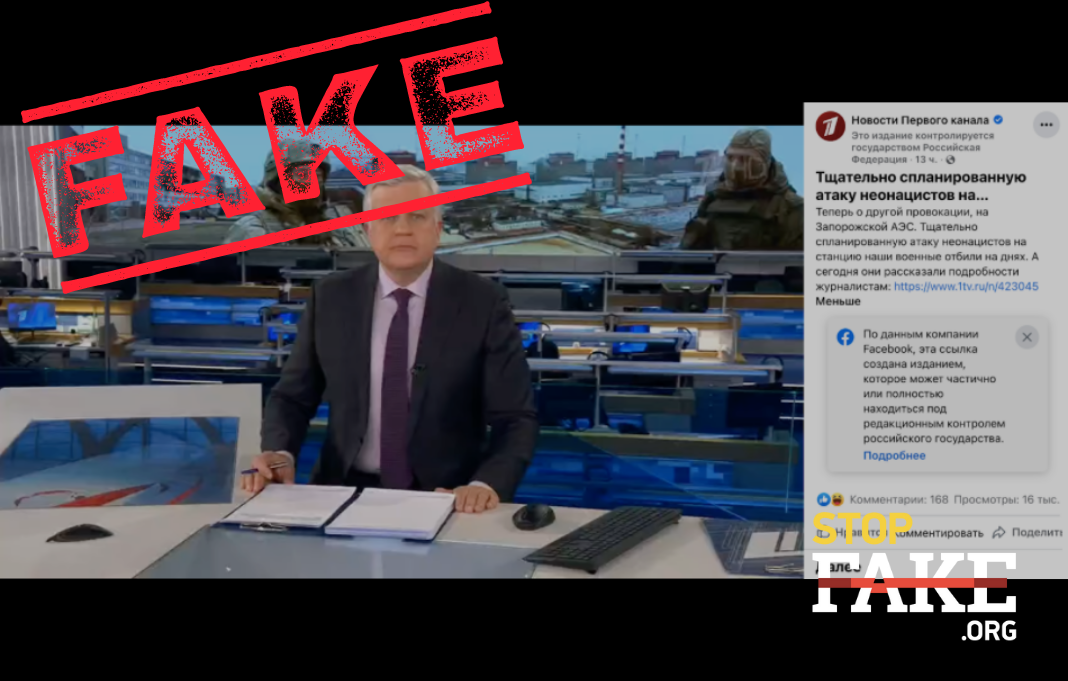 It is Russia and its invading army that attacked the Zaporizhzhia Nuclear Power Plant. This terrorist act carried out by Russian troops against a Ukrainian nuclear facility has been recorded and verified by several international organizations.

Russian media are disseminating yet another piece of disinformation concerning the Zaporizhzhia Nuclear Power Plant, claiming that Ukrainians hid scores of weapons and ammunition in the reactors, and after “negotiations” Ukraine “willingly” surrendered the facility to Russian invaders. The outrageous fake then goes on to claim that during the night of March 4 Russian forces repulsed a “carefully planned neo-Nazi attack on the power plant” and on Russian “patrols”.

On the night of March 4 invading Russian troops fired on the Zaporizhzhia Nuclear Power Plant. As a result of the attack, a fire broke out in Europe’s largest nuclear facility. Russian forces now control a key strategic facility, putting at risk not only Ukraine, but also neighboring EU countries, its own territory and Belarus.

Ukraine has not carried out any attacks on its own power plants. Many of Ukraine’s Western partners have confirmed that it was Russia that opened fire on the Zaporizhzhia nuclear facility. Speaking at the UN Security Council on March 4, US Ambassador to the United Nations about the attack, Linda Thomas Greenfield said that “by the grace of God, the world narrowly averted a nuclear catastrophe”.

“Russia’s attack last night put Europe’s largest nuclear power plant at grave risk. It was incredibly reckless and dangerous. And it threatened the safety of civilians across Russia, Ukraine, and Europe. As a first step, we call on Russia to withdraw its troops from the plant to permit medical treatment for injured personnel, to ensure operators have full access to the site and are able to communicate with nuclear regulators, and to allow the operators to conduct shift changes to ensure the continued safe operation of the plant” Ambassador Thomas Greenfield emphasized.

The US embassy in Ukraine called the Russian attack on the nuclear power plant “a war crime”. Putin’s shelling of Europe’s largest nuclear plant takes his reign of terror one step further,” U.S. Embassy Kyiv said in its Twitter post.

The International Atomic Energy Agency has called on Russia to release captured nuclear facilities, stressing the dangers of Russian action. “Russian forces now control the management of the plant and the approval of technical decisions made by the Ukrainian operators.  This is not a safe way to run a nuclear power plant” the IAEA said in a statement on March 7.

In addition, Energoatom, the Ukrainian state enterprise operating all four nuclear power stations in Ukraine, categorically rejects Russia’s claims that “weapons were found” at the nuclear facility. The company emphasizes that if Ukraine neglected the safety of the nuclear facility and actually kept weapons there, then the plant would never have fallen into Russian hands. In addition, on March 9 Ukraine’s Energy Minister Herman Halushchenko said that Russian military, using torture, had forced the Zaporizhzhia plant staff to record a fake appeal for Russia to use in its propaganda war.

After Russian media issued several disinformation videos on March 8-9 claiming that the Zaporizhzhia plant was operating safely, IAEA informed that the agency had lost contact with the Chornobyl nuclear power  plant.

“The IAEA in recent days had lost remote data transmission from its safeguards systems installed to monitor nuclear material at the Chornobyl NPP and another Ukrainian nuclear power plant now controlled by Russian forces, the Zaporizhzhia NPP” reads the IAEA update on the situation in Ukraine.

It is worth noting that before Russian troops seized the Zaporizhzhia nuclear power plant, Russian media was awash with fakes claiming the facility had been left unattended and unguarded, a fake that StopFake debunked last month. Now the Kremlin propaganda machine has changed its rhetoric somewhat and is contradicting itself, claiming the station had “huge stockpiles of weapons,” but the Ukrainian military “laid down their arms without resistance” and “gave” the nuclear power plant over to the Russian military.