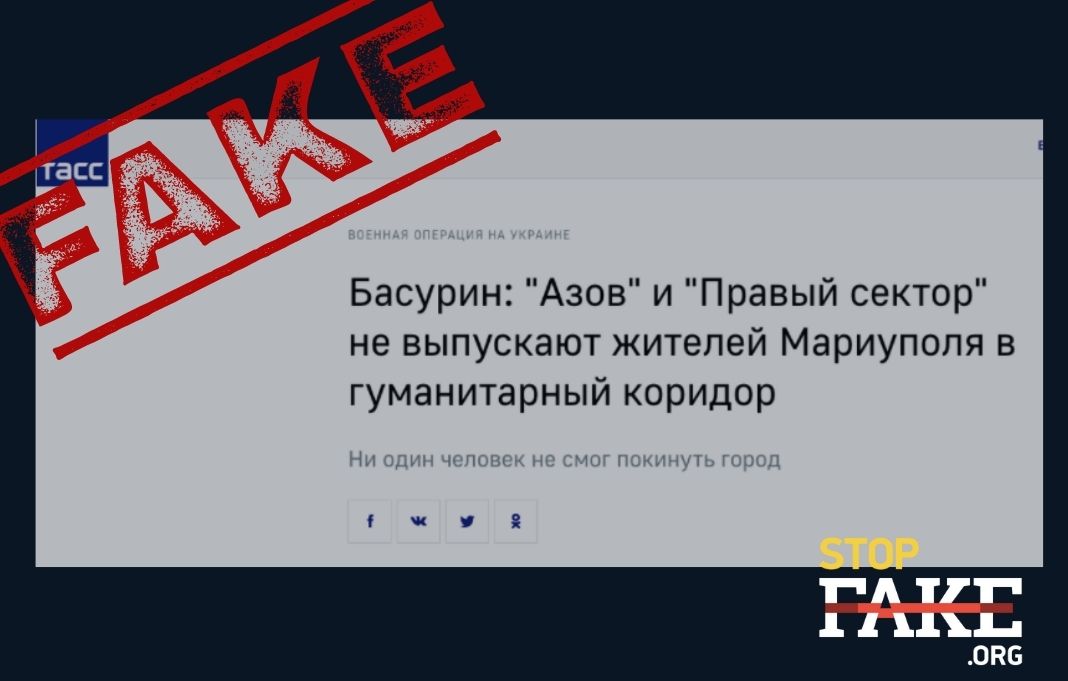 Russian invading troops not only continue destroying Ukrainian cities, they and their media continue lying, today claiming that Ukraine’s military is not allowing Mariupol residents to leave, holding them in “a concentration camp” to use them as human shields. In fact, the city is blockaded by Russian invading troops who are destroying the city’s critical infrastructure and not allowing food supplies to enter the city.

The majority of Russian media disseminated this fake story along with lesser known online publications, among them sm.news, Pervyi Kanal, Argumenty Nedeli, Vzglyad, Moskovkyi Komsomolets, TASS and others.

Eduard Basurin, the Kremlin’s man and deputy police chief in the self-proclaimed Donetsk People’s Republic has faithfully executed Kremlin propagandist tasks for years. As the Russian invasion of Ukraine rages into the second week, Basurin continues making false pronouncements. Speaking to the Russian television channel Rossiya 24 Basurin brazenly lied about the situation in Mariupol and the surrounding areas, claiming that the Azov and Right Sector battalions were preventing civilians from leaving Mariupol.

The Russian government and its minions on Ukraine’s occupied territories are cynically lying about their
“concern” for the civilian population. Vladimir Putin is justifying his invasion of Ukraine by claiming that he is liberating Ukrainians from Nazis. The Azov battalion and Right Sector are not involved in the defense of Mariupol, Russian propaganda however, has been spreading fakes about these groups for years to discredit them. They are mentioned precisely to substantiate Putin’s myth about the “denazification of Ukraine”, the Kremlin’s justification for the invasion.

The overseers that Basurin talked about are in fact the Russian occupying troops who are shelling civilian infrastructure in Mariupol and throughout Ukraine. It is the Russian army, that is creating a humanitarian catastrophe in Mariupol, shelling civilian targets and infrastructure on purpose, including hospitals, apartment blocks and schools. On March 2 a Mariupol maternity hospital was the target of Russian missiles. The city was left without electricity specifically because the Russian army targeted critical infrastructure, leaving the city in a critical state. Mariupol city authorities say it is the Russian invading forces that are blocking food deliveries into the city, it is they that have created a blockage of the town.

“These scum have found no other way to break us. They stop the supply of electricity, water, and heat. They also damaged the railway connections. They’ve destroyed bridges, smashed trains so that we would not be able to take women, children, and the elderly out of Mariupol. They hinder the supply of food, blockade us, just like Leningrad” the city council wrote on its official Telegram channel.

The chairman of the Donetsk Regional Administration Pavlo Kyrylenko emphasized that the Russian army is intentionally destroying critical infrastructure, they are creating a humanitarian crisis and their disinformation about “green corridors” is being circulated for tactical reasons.

According to Kyrylenko, there are no “green corridors”, this is a trap through which the invading forces plan to use the civilian population as human shields against the Ukrainian military. In the battle for Ilovaisk in 2014, after an agreement that Vladimir Putin allegedly took care of personally, Russian military completely shot  down the “green corridor” through Ukrainian military were trying to come out of a Russian encirclement. The Ukrainian Center for Combating Disinformation and the Ukrainian National Security Council have both warned that the Russian invaders plan to resort to such tactics again.

“One of the tricks the enemy uses is to call for a humanitarian corridor for the evacuation of civilians in cities resisting the Russian invasion. The green corridor tactic was used by Putin’s army in 2014 near Ilovaisk. Then the Russian army created a huge tragedy. Proposing an evacuation, they are seeking to portray themselves as peacekeepers” the Donetsk Regional Administration said.