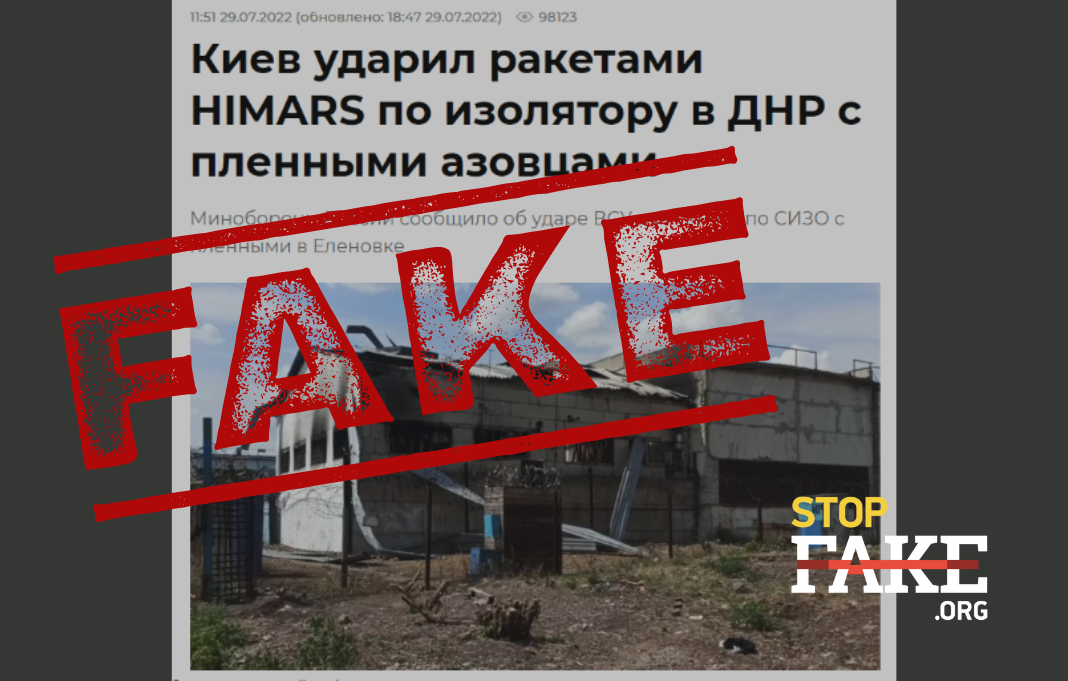 Ukrainian prisoners of war held in a detention center in Russian occupied Olenivka in eastern Ukraine could not have been fired upon from the Ukrainian side. Facts available in the public domain, international experts’ conclusions, the interceptions of Russian military conversations, all show that the Ukrainian military did not fire on the Russian prison camp where Russian invaders were keeping Ukrainian Azovstal defenders.

During the night of July 28-29 an explosion ripped through a hangar in Olenivka, Donetsk oblast. According to preliminary information some 200 prisoners of war were in the building, all of them Ukrainian military held captive by Russian invading forces. The explosion killed 53 people, the number of wounded is more than 75. More precise information on the number of dead and injured is not available because the Russian military do not allow international humanitarian organizations to enter the scene of the tragedy.

Russian propaganda is trying with all its might to transfer responsibility for this tragedy onto Kyiv and to convince Ukraine’s allies that Ukrainian military are using western provided equipment to attack civilians and prisoners, thereby violating international laws.

StopFake learned that claims about Ukraine planning to destroy Azov servicemen began circulating on Russian propagandist sites some two months ago. At the beginning of June Russian Telegram channels were writing that “the British want to frame a multi-launch rocket system strike as an attempt by the Russian military to hide the execution and torture of prisoners and hype up the event according to the Bucha scenario,” referring to the Kyiv area town where Russian troops left behind scores dead in the streets and in mass graves.

Simultaneously, another scenario was being developed, at the center of which was the accusation that Ukrainian President Volodymyr Zelensky allegedly “ordered the execution of the Azov fighters, who while in captivity, had exposed his crimes.” To confirm this fake, RIA Novosti propagandist correspondent Andrei Rudenko recorded several videos with captured Azov servicemen, which he posted on his Reporter Rudenko Telegram.

Under severe pressure, the prisoners were forced to “confess” to what their Russian captors and Russian propaganda demanded, including “receiving orders from President Zelensky’s office, to commit brutal murders.” This so-called sensational revealing video appeared on the eve of the tragedy in the Olenivka prison camp.

Accusations against Zelensky of ordering the “executions” quickly spread not only through the Kremlin’s many information channels, but was also articulated by Viacheslav Volodin, the speaker of the Russian Duma.

Volodin repeats the two-month-old narrative: “President Zelensky and Washington are behind the missile attack on the pre-trial detention center in Olenivka. This was done with one goal in mind: to prevent a new Nurnberg trial, where captured Azov Nazis would testify. Washington and Kyiv are removing witnesses of their crimes against humanity, so that citizens of the US and European countries do not turn away from them, and the supply of weapons and ammunition continues,” Volodin said.

After even very preliminary fact checks, the claim that “Zelensky ordered everyone killed with a HIMARS strike” begins to fall apart.

Initial Russian reports about Olenivka only mention “shelling with 152-caliber shells”, and the Donetsk People’s Republic Joint Center for Control and Coordination of the Ceasefire Regime (JCCC DP R), the primary source for the reports, does not mention or note any HIMARS strikes throughout the night of July 29.

The first reports of alleged HIMARS attacks on the Olenivko prison colony appear 10-12 hours later, after RIA Novosti “reporter” Andrei Rudenko posts his video on his Telegram channel claiming to be “the first video from the Olenivka colony, which was fired on at night with HIMARS multi-rocket systems.” This is the first time that HIMARS are mentioned in this Russian narrative.

It is important to note that Rudenko’s videos are filmed in the light of day, the sun is already high in the sky. His videos do not contain any footage shot at night or in the early hours of the morning. No footage of eyewitnesses has appeared online anywhere which could confirm “a missile strike on the prison camp.” There is also no video showing prison camp personnel extinguishing fires at the scene.

This discrepancy suggests that most likely there were no prison camp employees on the scene during the explosion.

It is worth noting that the Ukrainian prisoners of war were transferred to a hangar in the prison camp’s industrial zone shortly before the events of July 29. On the day of the explosion, they were also left unguarded. One of the first videos from the hangar with the bodies of the dead is again published by the propagandist correspondent Rudenko.

The first thing that looks suspicious is that 12 hours after the alleged shelling,  smoke still rising from the site.

The damage to the interior of the building, however, appears to be minimal. There is no visible rocket crater. Even the metal beds remain intact. The walls are burned but there are absolutely no traces of missile fragments in them.

The corrugated iron roof, contrary to all ballistics laws, appears to have withstood the alleged HIMARS missiles fired.  Reporters on the scene for forbidden from shooting the roof. In the initial video from the scene, the victims’ bodies are lying scattered in a chaotic manner.

However, in a later video they are arranged in a line, laid out so that is convenient to film them. There are people milling about wearing bulletproof vests and blue helmets and filming the destruction.

These orchestrations do not lend any credibility to this glaring Russian fake.

Ukraine’s Defense Ministry, the Main Intelligence Directorate, the Security Service (SBU) and the Parliamentary Human Rights Ombudsman issued a joint statement on the Olenivka tragedy, calling Russia’s actions “a cynical act of terrorism,” the attack on the prison camp “an organized murder of Ukrainian prisoners of war” and stating unequivocally that Ukraine did not carry out “a missile or artillery strike on Olenivka.”

The SBU has also published intercepted telephone conversations, in which Russian military confirm that it is Russian troops who are responsible for the explosion in the Olenivka prison camp.

Judging by the intercepted conversation, the Russians could have placed explosives on the prison camp premises. The fact that none of the eyewitnesses heard missiles actually flying into the prison camp can confirm this version of events. There was no characteristic whistle of a flying rocket, the explosions occurred on their own.

The intercepted Russian conversations also confirm that Russian occupying forces placed their Grad missile launchers near the prison camp and began firing into Ukrainian controlled territory. The Ukrainian side did not return fire, this was confirmed by DPR representatives themselves.

The Ukrainian Security Service also noted that judging from the videos from the scene available online, the windows in some of the prison camp buildings appear to be completely intact. This indicates that the epicenter of the explosion was located inside the destroyed building, whose walls curtailed the blast waves and saved the adjacent premises.

Military analyst Kyrylo Danylchenko points out that the nature of the damage at Olenivka, does not correspond to the type of damage a HIMARS missile leaves behind. Rather, the images show damage that is typical for a thermobaric projectile, which sucks in oxygen from the surrounding air to generate a high-temperature explosion. The scene contains charred bodies, but the metal beds have remained completely intact.

The damage done to the hangar in the Olenivka prison camp is not typical of the kind of damage inflicted by a HIMARS multiple launch rocket system. The US Institute for the Study of War also came to this conclusion.

According to an assessment of the explosion at the prison camp carried out by the Institute for the Study of War “Kremlin-sponsored news outlet “RIA Novosti” published videos of the detention center, which showed fire damage but not the sort of damage that a HIMARS strike would likely have caused.”

StopFake found several social media publications showing fragments of missiles from a HIMARS rocket launcher, claiming they were found at the Olenivka site. However, it is impossible to determine from these fragments either the place of impact, or the time the explosion occurred, and most significantly, it is impossible to ascertain that all the fragments in the photo belong to the same missile.

Three hours after posts showing missile fragments allegedly from Olenivka appeared online, the same images were used to illustrate stories about “a HIMARS attack on a railway line in Zaporizhzhia.” Alas, Russian propagandists journalists and social media activists do not always have the time to tell their readers that they are using archival photos to illustrate their fakes.

In conclusion, Russian propagandists have been preparing the shelling of Olenivka for some two months, becoming entangled in their lies in the end. First, they could not decide whether the prison camp was attacked with howitzers or HIMARS. Then they became confused about whether or not Russian personnel were injured in the strike, or if there were any Russian personnel at the site at all. The nature of the explosion showed that the building was shelled from the direction controlled by the Russian army, and not from the directions where the Ukrainian Armed Forces are deployed. The alleged HIMARS strike concocted by Russian propagandists was so weak, that it failed to destroy the building’s roof and throw the metal beds into disarray. And attempts to prove that the rocket fragments laid out on a bench in an undisclosed location were fired on the prison camp by Ukrainians, were not in the least convincing.