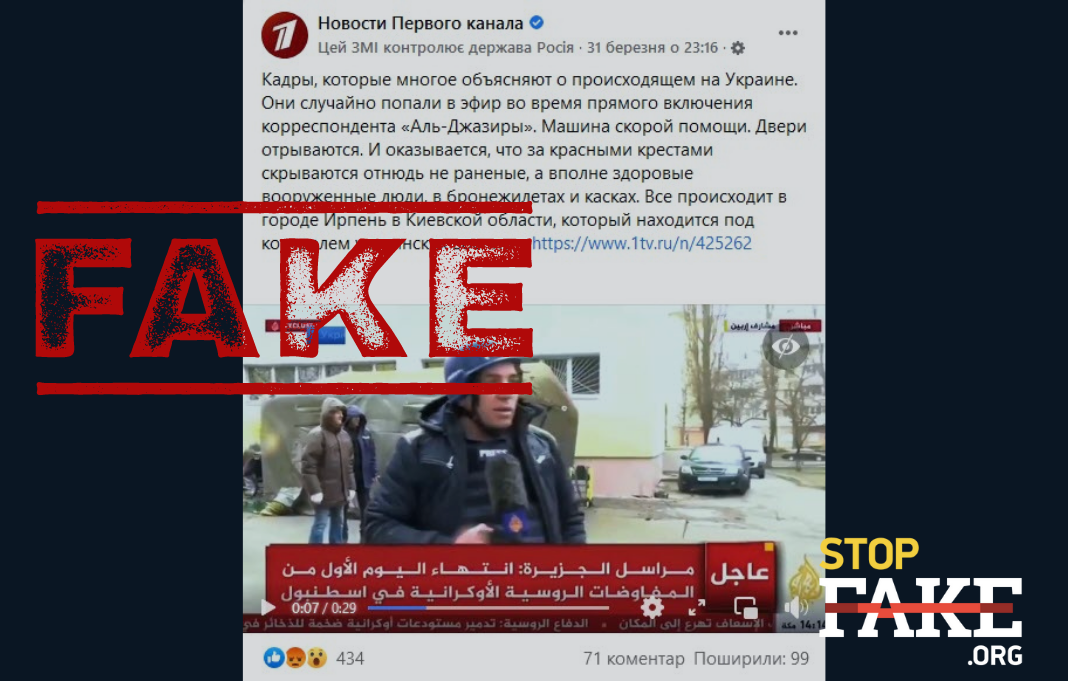 The full version of an Al Jazeera television story shows the Ukrainian military to be actively involved in the evacuating people from liberated Irpin, to the capital Kyiv. The military are not using medical vehicles for their own transportation, they are simply accompanying injured civilians who are being taken to hospital. Russian media, however, showed only a snippet of the complete Al Jazeera three-minute story, thereby concealing the full scale of the ongoing evacuation and the devastation Russian troops had inflicted on Irpin, and used the snippet taken out of context to accuse Ukraine’s military of an imaginary war crime.

Pro-Kremlin sites, online newspapers and social media accounts are spreading disinformation about the Ukrainian Armed Forces, accusing them of allegedly hiding from gunfire in ambulances. This is proven by an Al Jazeera report, the propagandists claim, who “accidentally filmed armed men in camouflage getting out of an ambulance.” According to the Russian Ministry of Foreign Affairs, the Ukrainian Army uses ambulances to transport armed soldiers. And to complete the disinformation formula, Russian media resort to another of their classic tropes and accuse Ukraine’s army of using civilians as human shields.

“During a live broadcast from Mykolayiv an Al Jazeera reporter captured the moment when several gunners in full Ukrainian Armed Forces gear are jumping out of a car with a red cross on the roof. The soldiers are perfectly healthy, they are smiling and animatedly talking about something,” Russian websites claim.

In fact, the video in question does not in any way indicate that Ukrainian soldiers are using medical vehicles for their own safe transportation. This video was not shot in Mykolayiv, but in Kyiv, and it captures the humanitarian evacuation of civilians from the Kyiv region to the capital. Ukrainian military accompanied the evacuated civilians to guarantee their safety on the way to Kyiv.

A detailed analysis of the full Al Jazeera video story by the Belgian Dutch language news magazine Knack, indicates that the video shows the evacuation of civilians from the Kyiv suburb of Irpin at the end of March, and not any events in Mykolayiv. This is supported by the logo on one of the ambulances, the Kyiv coat of arms with the Archangel Michael. With the help of satellite imagery and Google Street view, we can accurately determine the location where the video was shot, behind school No. 230 on General Naumov Street 35B.

In the story, Mahmoud Zaibak, an Al Jazeera correspondent reporting from Kyiv in late March-early April, describes how people were evacuated from the shelled city of Irpin. People were first moved in ambulances from Irpin to special medical centers on the outskirts of Kyiv, from which they were further transported to the capital. The Ukrainian Army is helping medical workers in this process, Zaybak explains.  The video frame at 00:59 shows a tent into which an evacuee is brought in a wheelchair.

Russian media are showing only 21 seconds from an almost three-minute Al Jazeera report, a segment intentionally cut out of context in order to hide the full, real story and accuse Ukraine’s military of an imaginary crime.

On March 27 the American newspaper Washington Post featured an article about the evacuation of civilians from liberated Irpin. Based on the video footage accompanying the article, it appears to have been filmed in the same location as the Al Jazeera story. The Washington Post video gives us a better understanding of the role that Ukrainian soldiers are playing in the evacuation of civilians, it clearly shows that they are helping refugees (timecode 00:05) and are not using medical vehicles for their “own safe transportation.”

International fact-checking sites such as Knack, Myth Detector and Maldita all published exposes of this fake by the Russian Foreign Ministry and the servile Russian media.