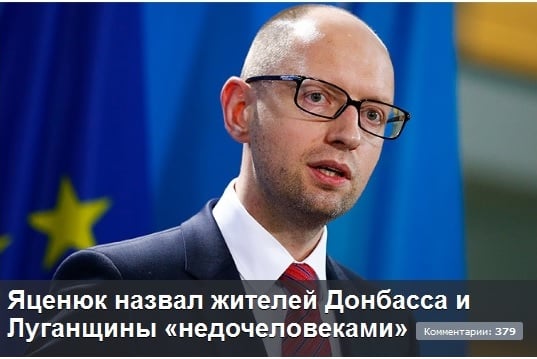 It was still summer, when leading Russian media spread the news about the Nazi nature of the Ukrainian Prime Minister Arseniy Yatsenyuk’s statements.  They claimed that Yatsenyuk called the so-called militia in Luhanks and Donetsk “untermensch” (subhumans) – a word that Adolf Hitler used.

And to this day, supporters of the separatists use this news as a proof of the “fascist attitudes” of the government in Kyiv.

Let’s see whether Mr. Yatsenyuk give himself a freedom for such a statement against the “militia.”  So, June 14, 2014 at 19:32 on the official Yatsenuk’s website appeared the Ukrainian-language message, that Prime expressed sincere condolences to the bereaved families of soldiers in Luhansk.

The last word in this context should be translated into English as “miscreant”, in fact, is exactly what it was translated on the Cabinet of Ministers website.  This translation of Yatsenuk statement appeared almost simultaneously with the recording on his personal site: “They died because they stood in defense of men and women, children and elderly people who were threatened destruction of invaders and paid by miscreant”.

Embassy of Ukraine in the United States on June 15 at 3:17 published the text in Ukrainian, which is identical to that on the website of Yatsenuk.

In the English version was the following sentence: “They lost their lives because they defended men and women, children and the elderly who found themselves in a situation facing a threat to be killed by invaders and sponsored by them subhumans».

Therefore it was interpreters, not Yatsenyuk, who used the word “subhumans”, one of the translations of the word “нелюди” from Ukrainian into English.  This word can also be translated into German – «untermensch», which is actively used by the ideologues of Nazi Germany.  After allegations of the use of Nazi terminology, site of the Embassy replaced “subhumans” on “inhumans” to avoid such a wrong interpretation.

Thus, Yatsenyuk did not call the inhabitants of south-eastern Ukraine subhuman. He called terrorists inhuman monsters, monsters who threaten the extermination of men and women, children and the elderly.