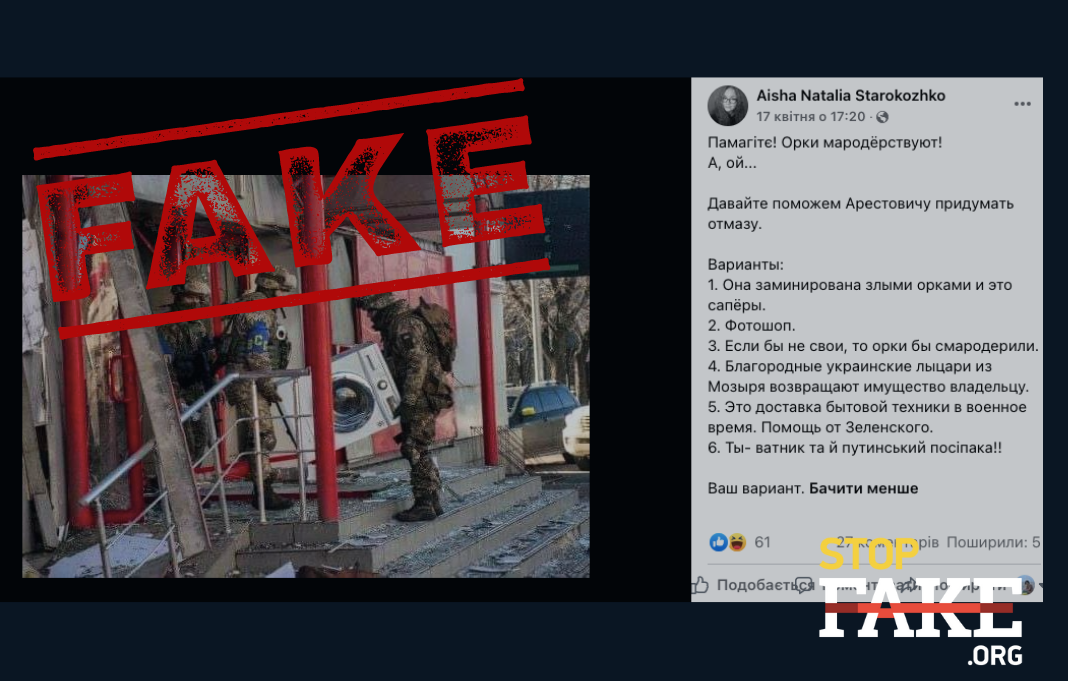 Photos of Ukrainian servicemen carrying various household appliances are being circulated among social media users. These must be Russian soldiers looting again, users write ironically under the photographs, only to suddenly focus on the fact that the soldiers in the photos are Ukrainian.

Russian propagandists are whitewashing the facts of prevalent looting by Russian soldiers and trying to hide the fact that the goods they stole in the Kyiv region were shipped to Russia from Belarus through the SDEK express shipping service. They are using these recorded looting incidents to create fakes about Ukrainian soldiers, accusing them of doing the looting that the Russian soldiers did.

“One doesn’t have to wait too long by any branch of the Nova Poshta parcel service to see how people in camouflage come driving, carrying large parcels to be shipped. Judging by the dimensions of the boxes, they are computers and household appliances,” writes the news-front.info site.

With such fakes the Russian propagandists are trying whitewash the Russian army’s looting in Ukraine, of which there is abundant factual evidence.

Russian propaganda attempts to portray the Ukrainian army as looters via photographs is easily verified using online image verification tools. A photograph showing a soldier with a washing machine is an UNIAN press agency photograph easily found in the agency’s photo data base. The photograph was taken on March 15, 2022, and it depicts police officers and Territorial Defense servicemen who are moving goods to safety from a Kharkiv store that was destroyed by Russian shelling. The photographer who took the picture is listed in the data base.

“Ukrainian servicemen carry a washing machine as they help to relocate goods from a destroyed by shelling market in Kharkiv, March 15, 2022,” the photograph caption reads.

This photograph is also in the AP Images photo data base with the caption exactly the same caption.

The second video distributed by Russian propagandists featuring a soldier holding bags of chips in his hand was made in the warehouse of the ATB supermarket network, which was looted by Russian troops in Kopyliv, a town some 60 kilometers west of Kyiv. In the video, a soldier is seen walking against a background of the looted warehouse, he carries bags of chips in his hands and jokes about a chip give away. It is obvious from his blue armband that he is a Ukrainian soldier.

The warehouse where this video was filmed is the ATB distribution center in Kopyliv, a city which suffered greatly from the Russian occupation. According to Watermelon Development, about a third of the town was badly damaged.

Interior Ministry adviser Anton Herashchenko also distributed a video from the same looted warehouse saying that while there, Russian troops drank expensive alcohols and even ate cat foot. Apparently, the video with the chips weas filmed in the same location during the Ukrainian soldiers’ inspection of the warehouse. The video shows the same interior, the same shelves and the same scattered boxes.

Russian troops destroyed more than 440,000 square meters of logistics real estate in the Kyiv region in total. The Association of Ukrainian Retailers reported that the ATB Corporation was forced to close some three hundred of its stores in active combat zones. Losses are estimated at several billion hryvnia. At the same time, over the past month, the corporation has collected more than 100 tons of humanitarian aid, necessary goods and food products for the Ukraine’s Armed Forces and Territorial Defense personnel.