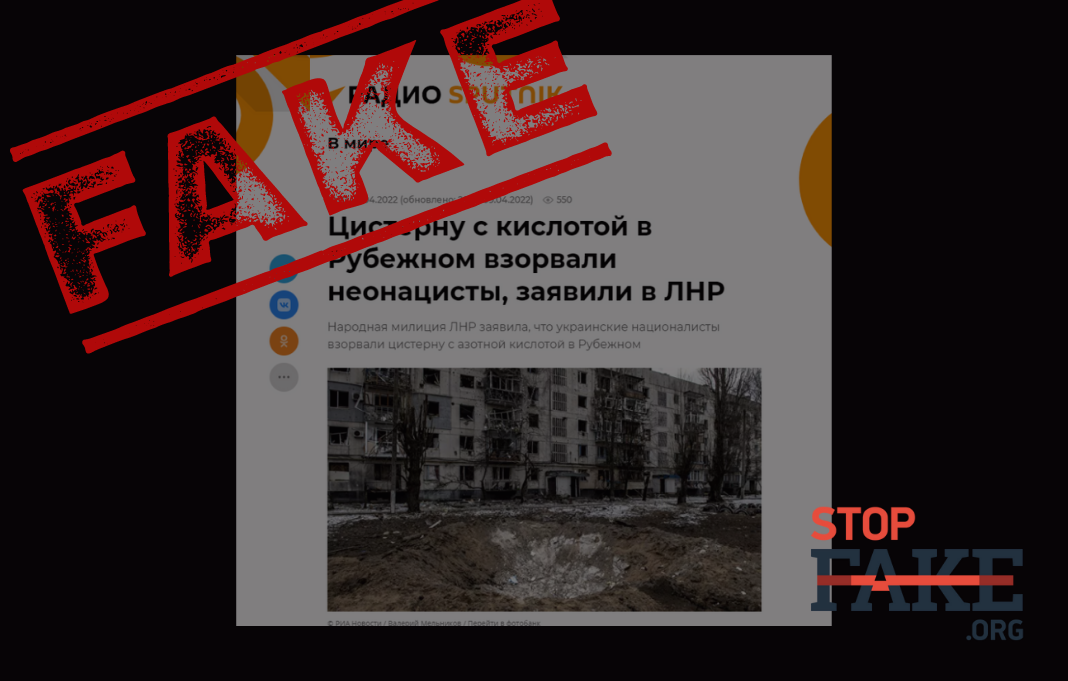 Contrary to Russian disinformation reports, the Ukrainian military did not blow up a nitric acid tank in Rubizhne, Luhansk province on April 9. According to Luhansk regional governor Serhiy Haidai, Russian troops had already twice blown up a nitric acid tank in Rubizhne. Blowing up its own chemical storage facility does not give the Ukrainian military any tactical advantage. The Ukrainian army has no plans to abandon its positions and leave Rubizhne.

Russian media claim that on April 9, Ukrainian Armed Forces blew up a tank containing nitric acid on the grounds of the Zarya chemical plant in Rubizhne, an industrial city in Luhansk province. Interfax, Regnum, Radio Sputnik, VKpress, Izvestya and others all reported that Ukrainian troops were retreating from Rubizhne and as they were pulling out, they blew up the tank. Ukrainian troops however have no plans to leave their positions in and around Rubizhne and they did not blow up any cisterns containing chemicals, said Luhansk province governor Serhiy Haidai.

Russian media cite the Luhanskinformcenter news agency as their source for these stories, which claims that “nationalist battalions staged the explosions”. The Luhanskinformcenter posted an 8 second video on their Telegram channel claiming this was the result of “Ukrainian nationalist battalions exploding tanks of nitric acid. The video shows an orange-colored plume of smoke rising behind a grove of trees, with no visible identifiable building or geographic location. Also, Alexander Mazhuga, the deputy chairman of Russia’s State Duma Education Committee echoed the agency and declared on his Telegram channel that “Ukrainian troops retreating from Rubizhne are endangering civilians with their thoughtless actions.” The initial stories on the pro-Kremlin Telegram channels claimed that Luhansk province governor Serhiy Haidai himself confirmed that Ukrainian military were involved in the Rubizhne explosions. Later these Telegram messages were edited out.

In fact, immediately after the explosion occurred Governor Haidai said that it was indeed Russian troops who had blown up the nitrogen tank. Directly before the explosions the Russian army had carried out a massive ground attack in Rubizhne, but had been repulsed by the Ukrainian army. As a result, several Russian tanks and armored personnel carriers were destroyed and up to 50 Russian soldiers were killed. Therefore, claims that Ukrainian Armed Forces are leaving the city and surrendering their positions, and that is why they blew up the tank, does not correspond with reality.

On April 8, before the explosions Russian troops were trying to capture Novotoshkivske, and were shelling Severodonetsk, Rubizhne, Novodruzhesk, Lysychansk, Popasna, Zolote and Hirne, but Ukrainian troops repelled them and pushed the Russians forces back. Immediately after the nitric acid explosions on April 9, Governor Haidai confirmed that it was the Russian troops that had blown up the tanks that contained some three tons of nitric acid. On April 9 Russian troops had indiscriminately bombed Rubizhne and Popasna with aircraft, trying to break through Ukrainian defenses, but the Ukrainian military successfully held them off. According to Serhiy Haidai, the Russian army has been unable to break through in the direction of Luhansk for over a month and a half. That is why there is no question of surrender, surrender of the city or withdrawal of Ukrainian troops.

According to preliminary estimates, the Rubizhne nitric acid explosion has affected an area of no more than 550 meters and created problems for the city. Wind conditions were such that vapors from the explosion were carried to the Russian troop positions around the towns of Kudriashivka and Varvarivka.