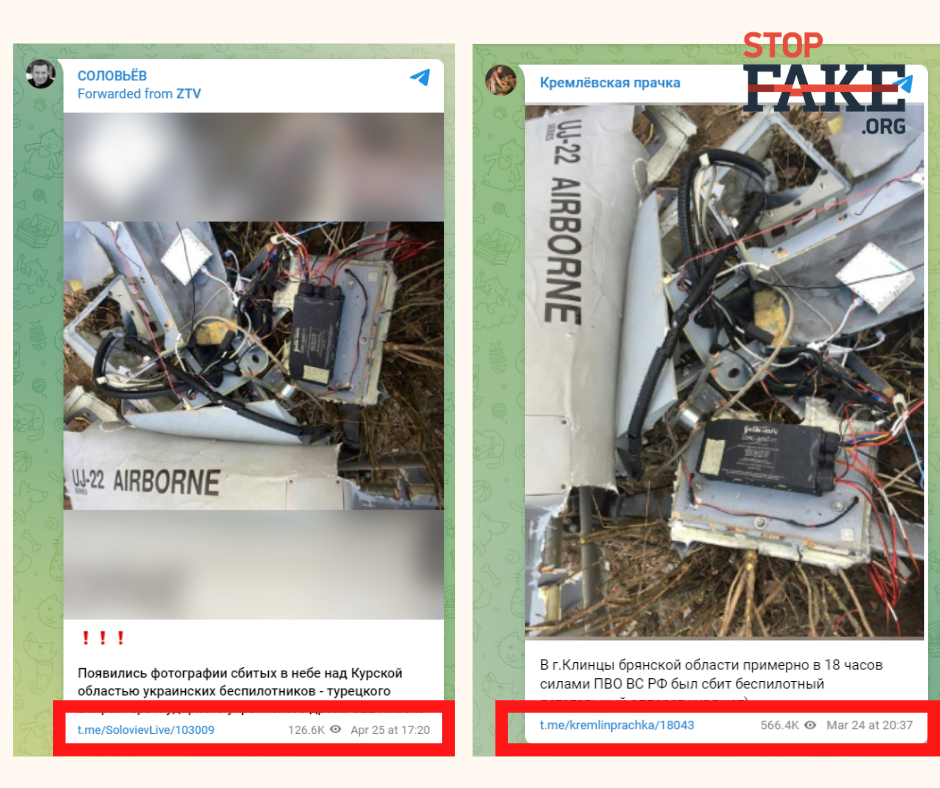 Photos of the same drone as in the one featured in this fake story were already published a month earlier, including by pro-Kremlin Telegram channels. At that time Russian propagandists claimed the drone was shot down in the city of Klintsy, in the Bryansk region.

On the evening of April 25 Russian Telegram channels published a series of photographs of a Ukrainian U22 Airborne drone that was allegedly shot down over the Kursk area. Several Russian publications featured this fake story.

StopFake discovered that the photographs of the downed drone accompanying the Telegram posts had already been used by the Russian media on March 24. One month ago, Russian propagandists claimed that Russian air defense shot down a Ukrainian drone in the Bryansk region, the wreckage of which fell 50 kilometers from the Russian border. Now, a month later, they simply recycled the photographs of this fallen drone passing it off as a freshly downed one, thereby creating the appearance of its “massive military victories.”

The UJ-22 Airborne strike drone was introduced in 2021. It can carry unguided aerial bombs to destroy enemy manpower and armored vehicles. These are the main technical characteristics of the UJ-22 Airborne:

The reason for such manipulations by the Russian media could be the recent fires of infrastructure facilities in the Tver region: the Russian Aerospace Defense Forces Central Research Institute building, and the Transneft Druzhba oil depot in the Bryansk region. Russian media is constantly whipping up hysteria about alleged Ukrainian shelling of Russian military facilities in the Belgorod region.