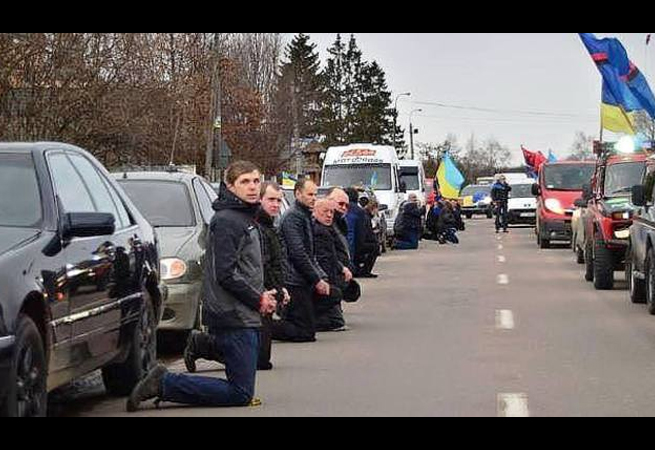 The Czech news portal Stalo-se published an article and a photo of men kneeling along a street, with the caption, “This is a salute that Ukrainians have to give to Nazis.” The article reports on alleged atrocities by bandit gangs in Kyiv, Lviv, and other regions. It also states that in Ukraine people have to salute members of the Right Sector by kneeling to them.

The Czech news portal gives the Slovak site HlavnéSprávy.sk as its source. There you can read a story, accompanied by the same photo, about the “Ukrainian democratic practice – everyone, get on your knees.” The caption to the photo depicting men kneeling before cars with Ukrainian flags reads, “A ritual in Ukraine”.

In fact, this image is not of Ukrainians saluting the Right Sector. It is a photo of a funeral convoy in the town of Kolomyia, where local residents are paying tribute to their fellow-townsman Roman Furyk, who was killed in the fighting in eastern Ukraine.

Several Ukrainian TV channels made a report about this event.

The ritual of paying last respects to soldiers killed in battle by kneeling is quite common in Ukraine. Here is one more video to confirm.