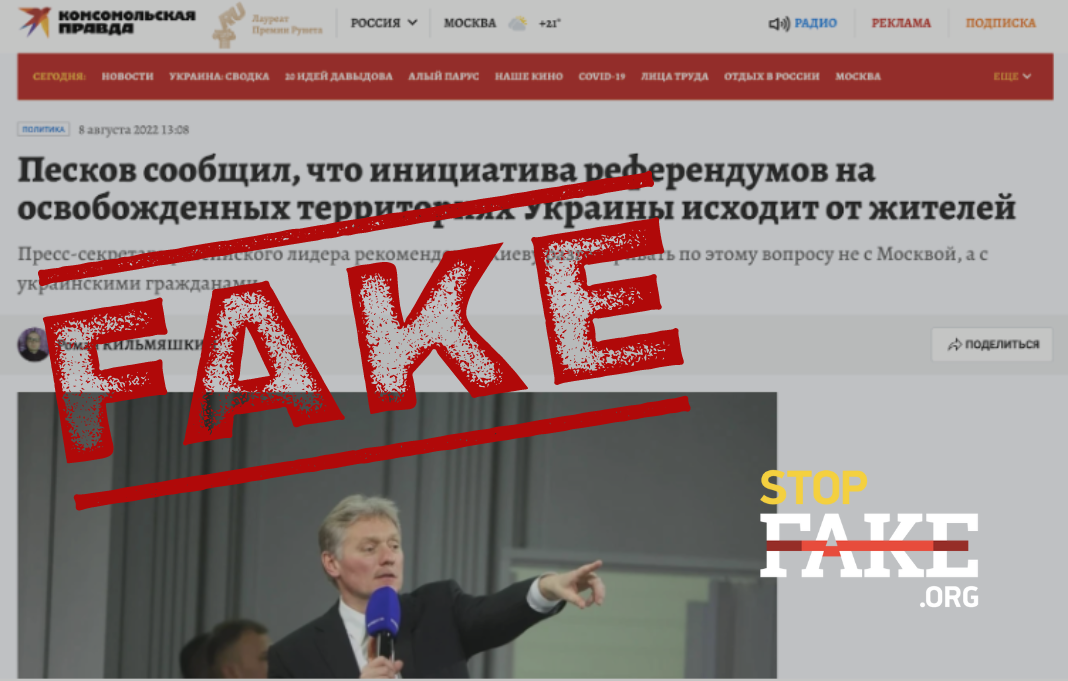 In Ukraine, under wartime conditions, it is forbidden to hold elections, amend legislation or the Constitution, or conduct referendums. Russian-organized “Referendums” held at gunpoint can in no way be considered a voluntary expression of will.

Pro-Kremlin media and Russian authorities are trying to legitimize the holding of so-called “referendums” in temporarily occupied Ukrainian territories. That is why Kremlin media are quoting Putin’s spokesman Dmitry Peskov who said that “it is the Ukrainians, the citizens of the southern regions of Ukraine themselves that want to hold referendums”. Thus Peskov implies that the Kremlin has nothing to do with the “referendums on joining Russia” and it is allegedly the citizens of Ukraine who “themselves determine their future through the popular vote” in Ukrainian territories seized by Russian invaders.

“The thing is that these plans [to hold ‘referendums’] are made by the locals. We are not the ones holding the referendum” Russian media quote Peskov.

Russian disinformation that “Ukrainians themselves want to hold referendums” does not hold water in the face of several legal facts. First, holding “referendums” with Russian guns pointed at you cannot be considered a voluntary expression of will. Second, any fake “referendums” in temporarily occupied Ukrainian territories are legally null and void and have no legal ramifications. Under wartime conditions in Ukraine, it is forbidden to elect any authorities, change the legislation or the Constitution, or hold referendums (Article 19 of the Law on the Legal Regime of Martial Law).

Moreover, according to the current Ukrainian law “On All-Ukrainian Referendum”, a national referendum can be conducted  based on the popular initiative of at least three million citizens (Article 16, paragraph 2). Only the Ukrainian parliament can appoint a referendum on changing state territory (Article 18, paragraph 2). A number of Ukrainian state bodies, including the Constitutional Court and the Central Election Commission, oversee the legality of procedures and the formulation of the referendum question. Only after all the necessary procedures are carried out, the proposal for holding an all-Ukrainian referendum about changing the country’s territory is sent to the President for consideration. If the proposal is approved by the President, the referendum is finally called and a date for holding the referendum is set (Article 27).

Only after going through all the required procedures, can a referendum on the issue of changing Ukraine’s territory can be considered justified and legitimate.

It is important to note that according to the decision of Ukraine’s Central Election Commission, no Commission entities function in the Ukrainian territories temporarily occupied by Russia, and access to Ukraine’s State Voter Register has been closed since Russia’s large-scale invasion began. Therefore, no voting can take place in the occupied territories.

That is why all Russian attempts to legalize their “control” over a part of Ukrainian territory and pass that off as a “Ukrainian” pseudo-decision is a legal farce that is fundamentally inconsistent with Ukrainian law. Moreover, the occupant’s actions grossly violate Ukraine’s state sovereignty and territorial integrity, they also violate a number of international norms.

No democratic state will ever recognize the results of such a Russian “referendum” on occupied Ukrainian territories.