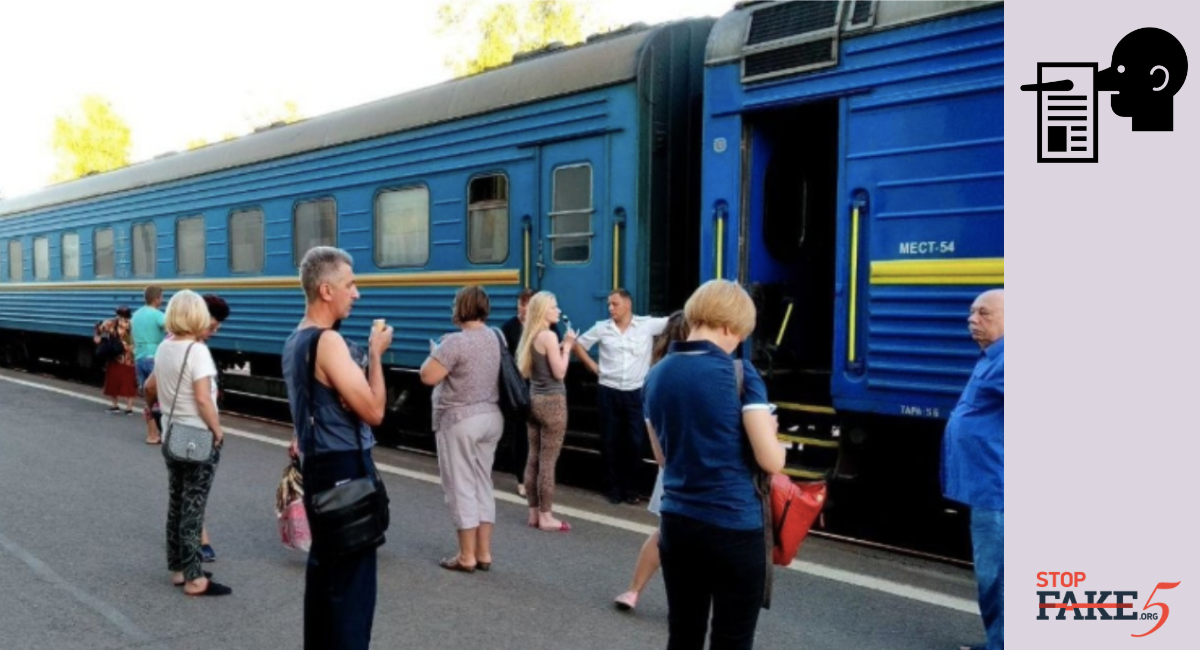 This week Russian media announced that Ukrainians are demanding that rail traffic to Crimea be reinstated so that Ukrainians could holiday on “the Russian peninsula”. Ukrainians are hoping that Ukraine’s new government and newly elected president will reinstate both rail and air traffic between the annexed peninsula and the Ukrainian mainland, they wrote. Scores of Russian officials eagerly related this fake story stressing that the Kremlin would be only happy with “such an initiative from the Ukrainians”.

“If such an initiative has appeared, these are very positive things and they should be welcomed. The psychology of the citizens of Ukraine is changing towards a peaceful resolution of this issue. Resuming rail connection with Crimea is beneficial for Ukraine, it will allow Ukrainians who massively travel to the peninsula to reach its resorts more comfortably, ”said Crimean parliamentary speaker Yefim Fiks.

Fiks, a former Ukrainian parliamentarian, joined the Russian occupying powers after the Kremlin annexed Crimea in 2014.

Russian media base the claims about resuming train and air traffic with occupied Crimea and mainland Ukraine on two petitions which on July 25 appeared simultaneously on the Ukrainian presidential website and very suspiciously began to be quickly disseminated by Russian news outlets. Such petitions require 25,000 signatures in order to be considered. At the time of this publication one petition gathered 710 votes, the other 1042. These numbers are a far cry from the massive support that Russian media claim these initiatives have. 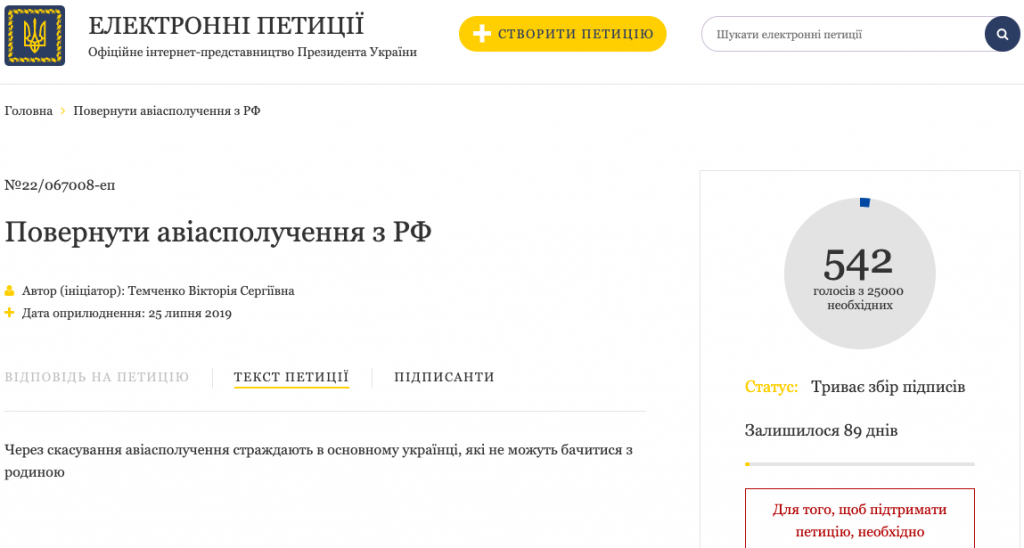 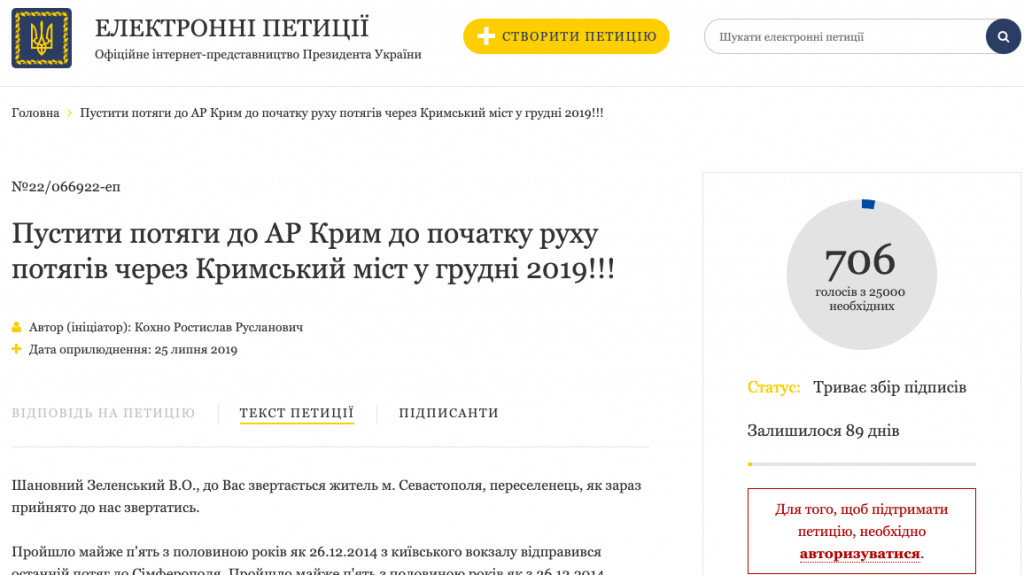 The Kremlin regularly launches media campaigns claiming Ukrainians want to lift the travel blockade on occupied Crimea and resume transport links; they began to be disseminated more intensively after this year’s presidential election.

However, as Ukraine’s Presidential representative in Crimea Anton Korinevich points out in an interview with the Segodnya newspaper, until the complete de-occupation of Crimea actually happens, Ukrainian authorities will continue to maintain the Crimean travel and water blockade.

“Ukraine should apply the mechanisms it has at its disposal to put pressure on the invader state. For the occupying state this issue is certainly important as it impacts on the economy of Crimea. But in the near future, there will be no changes in our approach” Korinevich said. 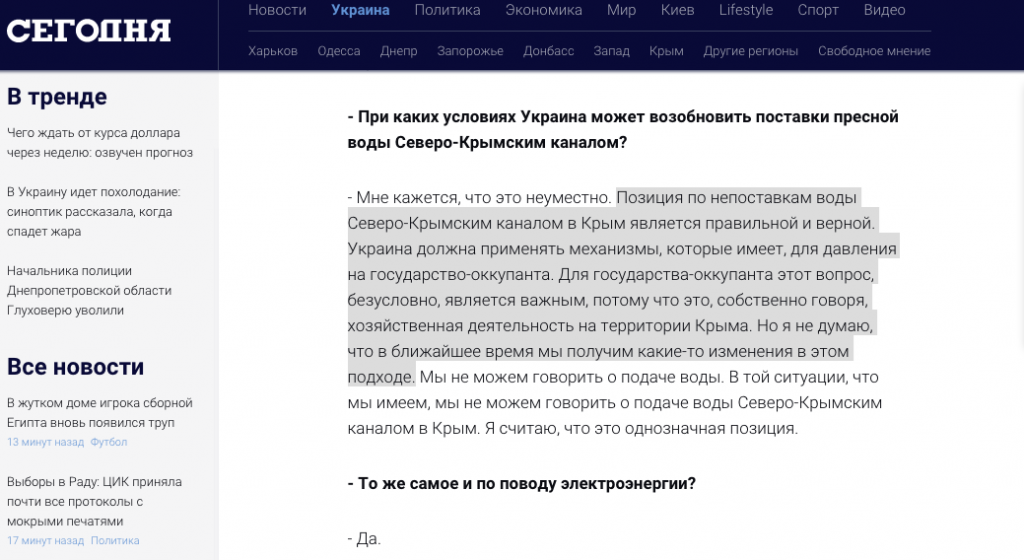 Ukraine’s government maintains the same position regarding transit connections with Russia as a whole. Ukraine’s Infrastructure Minister Volodymyr Omelyan has repeatedly stated that Kyiv will not hold any negotiations with Russia on these issues until a full de-occupation of Crimea and the Luhansk and Donetsk eastern Ukrainian territories takes place.

In 2014 Ukraine stopped supplying water to the Russian occupied peninsula, officially closed Crimea’s ports and stopped cargo and passenger rail services to Crimea. In 2015 as a result of public blockades of roads to Crimea, truck deliveries of goods and electricity supplies to the peninsula were stopped.