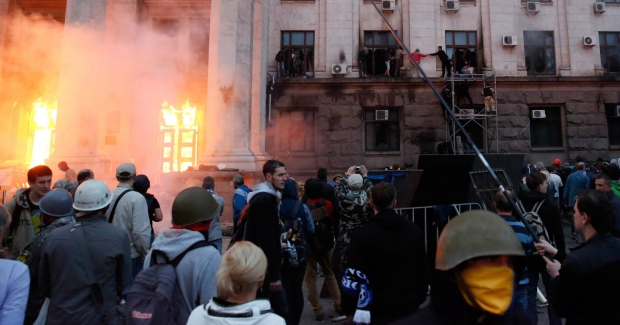 Many Ukrainian news agencies claim that UN experts in their report on the state of human rights in Ukraine confirmed that Russian intelligence agencies were behind the tragedy in Odessa on May 2. Over forty people had died and many had been wounded in street fights, shootings and the fire in the House of Trade Unions

Most of the news agencies report the following information: «Evidence found that the clashes in the city and the fire in the House of Trade Unions had been prepared by the Russian intelligence agencies. It is known that two GRU (Russian Main Intelligence Directorate) officers took part in the preparations, – reads the third report of the UN mission on the human rights situation in Ukraine.»

This information is not true. Here is the full version of the UN report. It contains no information concerning Russia’s Main Intelligence Directorate (MID, ГРУ, Главное разведывательное управление России, GRU).

The only part of the report, mentioning «two officers» is about two SBU officers, who were detained by the “Luhansk People’s Republic” while attempting to negotiate the release of their colleagues who were being detained.

Russian citizens and their possible contribution to the events of May 2 are mentioned only with reference to the SBU publication: «Also on 3 May, the SBU published the names and passports of three citizens from the Russian Federation allegedly involved in the 2 May violence.»

The UN experts made no conclusions about the part of the Russian intelligence agencies.