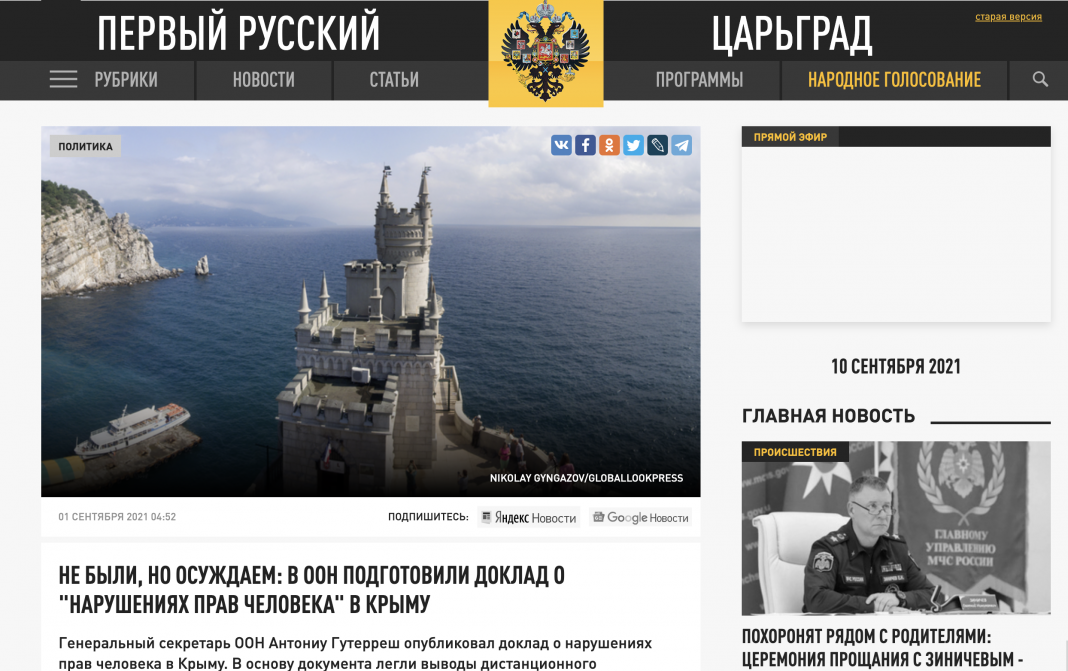 Last week Russian media featured a number of disinformation materials dedicated to the UN report on human rights violations in occupied Crimea. The publications claim that the United Nations has published an “odious” and “contrived” document, which allegedly does not contain “a single fact”. These fake stories also allege that the UN “scorned” cooperation with the Kremlin on issues concerning the peninsula, and Moscow’s “proposal to cooperate with the Russian Foreign Ministry and the invitation of the UN delegation to Crimea was refused in evasive formulations”. These publications also feature Russian “experts” who criticize the UN report, some go as far as to claim that the UN and Western countries “find it difficult to accept democracy,” therefore international organizations “take revenge on Crimea” by publishing such “dubious” documents.

This September the United Nations released a new UN Secretary General Antonio Guterres report on human rights violations in Crimea and Sevastopol. The document, which covers the period from July 1, 2020 to June 30, 2021, and describes massive violations of Crimeans’ rights by the Kremlin, provoked a disinformation wave in the Russian media. Using narratives that the StopFake team has repeatedly debunked, Russia tried to denigrate the document that accuses the Kremlin of violating international law and informs the general public about detentions, arrests and torture in Crimea.

According to the report, during the period of July 2020-June 2021 the number of arbitrary detentions of religious minorities in Crimea increased fivefold compared to the same period in the previous year.

In this latest UN report the Secretary General once again points out that Russia refuses UN requests to grant the Office of the High Commissioner for Human Rights access to Crimea: “Despite those efforts, and despite the willingness of the Russian Federation and Ukraine to discuss the issue with the United Nations, it was still not possible to find a mutually acceptable formula to ensure access by OHCHR to Crimea…  I urge the Russian Federation and Ukraine to make every effort to ensure unfettered access to Crimea by OHCHR and international and regional human rights monitoring mechanisms to enable the effective implementation of the relevant General Assembly resolutions.” (Paragraph 46)

Numerous reports by the Office of the UN High Commissioner for Human Rights have noted that Russia refuses to fulfill its legal obligations regarding human rights in occupied Crimea and refuses to ensure free and unhindered access to the peninsula by any international monitoring mission.

The international community regularly calls on Russia to open access to Crimea for human rights monitoring missions. Ukraine’s international partners have repeatedly stressed that the occupation and militarization of the peninsula have consequences that “go far beyond the borders of Ukraine” and pose threats to the entire world.

Since the beginning of Russia’s occupation of Crimea, both the Kremlin and official Russian media have repeatedly denied any responsibility for mass searches, arrests, abductions and torture of Crimeans.  A recent report by Crimea SOS human rights organization covering the period 2014-2018 recorded the following:

CrimeaSOS analysts recorded at least 372 cases of illegal detentions, and at least 340 politically motivated searches over that five year period.