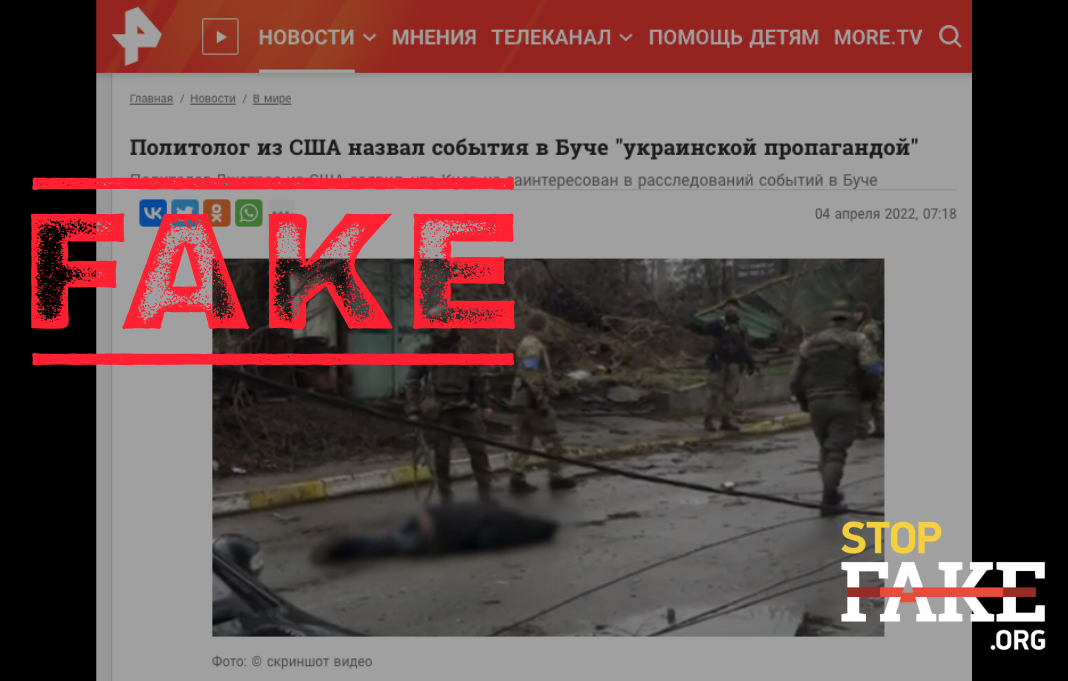 Jim Jatras cannot be called a useful idiot because he is seemingly an intelligent man with not an insignificant career behind him as a policy adviser and lobbyist. This former State Department employee is today a Russian propaganda mouthpiece, who along with other so-called “experts”, appears constantly on RT and Sputnik. Jatras dutifully echoes Kremlin disinformation narratives, and he most certainly does not represent “the position of the United States” as Kremlin English language mouthpieces RT and Sputnik claim. The crimes that Russian troops committed in the towns and cities around the Ukrainian capital Kyiv have been documented not only by Ukrainian authorities, but also by international media and human rights organizations.

Russian propagandist media continue to make up fakes in order to distance themselves from the brutal atrocities that Russian troops committed in Kyiv province. One way to bring a semblance of credibility and create the illusion of Western support for the Russian version of events in Ukraine is to bring in so-called experts from abroad, who parrot the Kremlin line.

And so the Kremlin propaganda narrative, referring to a certain “political analyst from the United States” declares that “the events in Bucha are simply an episode in Ukrainian propaganda’s work” and that “Kyiv is not interested in conducting any investigations”.

RT and Sputnik present Jim Jatras as a political analyst. He is one of the omnipresent western talking heads that parrot Kremlin propaganda narratives and seemingly show that RT and Sputnik are really balanced and engage western viewpoints. From the beginning of Russia’s invasion of Ukraine, Jatras has said that Russia’s arguments for the war were “compelling,” that is was unlikely Ukraine would continue to exist as a state and that President Zelensky would end up in exile. In previous appearances Jatras has actively defended the Russian Orthodox Church and its Moscow Patriarchate and has maligned the Orthodox Church of Ukraine. Jatras’ comments are not surprising, but they are completely in line with Kremlin narratives about the atrocities in Bucha and other Ukrainian cities.

Kyiv province was completely freed from Russian occupation on April 2. According to Ukraine’s Prosecutor General Iryna Venedyktova as of April 3, 410 murdered civilians were identified in the region. A mass grave of civilians was found in the town of Bucha. Maxar Technologies, a company which collects and publishes satellite images of Ukraine, has provided evidence that the mass grave next to St. Andrew’s church in Bucha was already there on March 10. Shelling and active hostilities were an everyday occurrence in the Kyiv region from the very beginning of Russia’s invasion. On March 6 the Bucha City Council reported that the shelling was ongoing, Russians were killing civilian women and children, robbing shops and not allowing humanitarian aid to enter the city.

“The cases we documented amount to unspeakable, deliberate cruelty and violence against Ukrainian civilians,” said Hugh Williamson, Europe and Central Asia director at Human Rights Watch. “Rape, murder, and other violent acts against people in the Russian forces’ custody should be investigated as war crimes.”

The New York Times analyzed satellite images of Bucha and determined that many of the civilians were killed more than three weeks ago, when the Russian army controlled the town. According to the satellite images, bodies of murdered Bucha residents first appeared on Yablonska Street between March 9-11 and were found to be in exactly the same positions when the Ukrainian army entered Bucha.

Russian claims that Ukraine is not going to investigate these atrocities is also untrue. Ukraine’s President Volodymyr Zelensky said there was ample evidence of war crimes and Ukraine would do everything possible to hold the Russian military accountable. Ukraine’s Foreign Minister Dmytro Kuleba echoed the President and called on representatives of the International Criminal Court and other international organizations to come to Bucha and other Kyiv area towns and villages to collect evidence of Russian war crimes and crimes against humanity.

StopFake has already refuted Russian propaganda fakes claiming the atrocities in Bucha were staged by Ukrainians themselves.