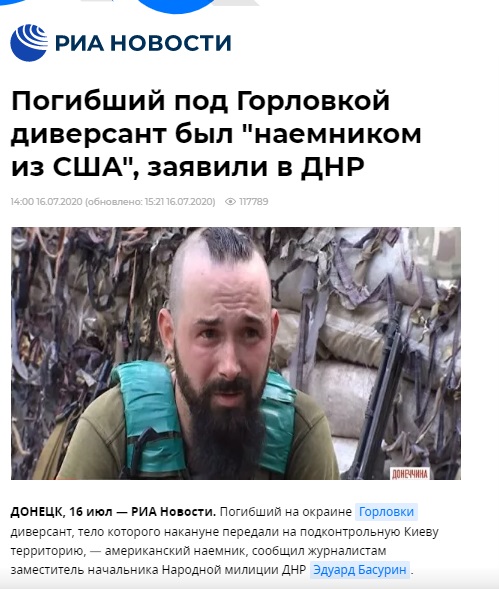 Rossiyskaya gazeta, Rossiya, Donetsk News Agency, Komsomolskaya Pravda, RIA Novosti, 360, DNR Pravda and others disseminated stories during the week of July 13 claiming Sean Fuller, an American serving with a Ukrainian marine battalion was killed near Horlivka, a city in the Donbas some 76 kilometers north of Russian occupied Donetsk. The source for the story is Eduard Basurin, the deputy chief of the self-proclaimed Donetsk People’s Republic so-called People’s Militia.

We’ve ascertained the identity of the deceased saboteur who was handed over to the Ukrainian side yesterday. He is Sean Fuller, a mercenary from the United States whose nome de guerre is Texas. He is an explosives specialist who served in Iraq” Basurin said.

The Donbass Insider, an English language separatist web-site also claims that one of the men killed on July 13 was Fuller. In an rambling, convoluted story that accuses Ukraine of violating ceasefires and lying, the author, one Christelle Neant, a French woman “searching for truth in Donbas” who was lauded in a 2017 Sputnik article accuses Ukraine of provocations and claims Ukraine’s  military “is in the hot seat” because of foreign fighters’ deaths.

Just like with Mark Twain, Fuller’s death has been grossly exaggerated. Sean Fuller is alive and well and continues to serve in the Ukraine’s 503rd Marine Corps battalion. On July 16 the battalion published a video of Fuller in which he says “You can’t kill what’s already dead”.

A day later another video in which Fuller jokingly says “still alive here” was also posted to social media.