Moskovskyi Komsomolets and other Russian media featured stories based on an American magazine article claiming that the US is telling Kyiv to give up on returning Crimea to Ukrainian control. Crimea is not Ukraine and Kyiv has no chance of returning the peninsula, declared Moskovskyi Komsomolets, citing Doug Bandow’s article Settle Crimea with a referendum in the National Interest bi-monthly magazine.

Finally Bandow proposes an internationally supervised referendum to settle the issue of Crimea. He makes a sweeping generalization and refers to all Crimeans as Russians and declares they must be consulted in deciding their fate.

Doug Bandow is currently a senior Fellow at the libertarian Cato Institute, which is part owned by the ultra-conservative Koch brothers. Bandow was forced to resign from this Institute in 2005 after it became known that he accepted payments in exchange for favorable articles for over ten years. In his writings Bandow supports great power politics, where large powerful countries decide the fates of smaller, less influential ones. He is no friend of Ukraine and has referred to it as a fake country that should be left under Russia’s influence. 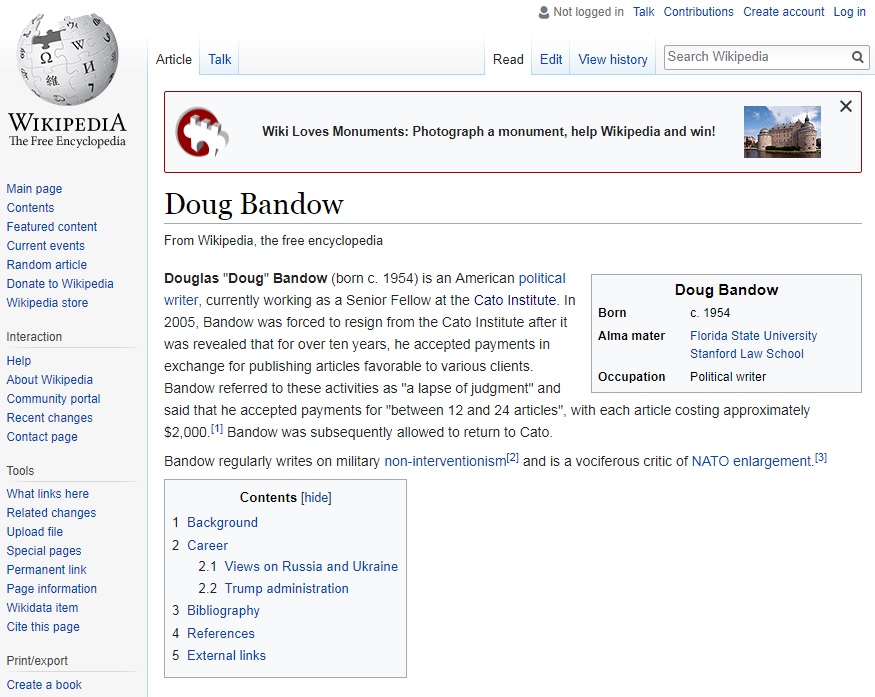 Needless to say the views of a fellow of from a libertarian institute do not represent the view of the United States and its government. The official US position on Crimea remains unchanged. The Crimea Declaration states that “the United States reaffirms as policy its refusal to recognize the Kremlin’s claims of sovereignty over territory seized by force in contravention of international law. In concert with allies, partners, and the international community, the United States rejects Russia’s attempted annexation of Crimea and pledges to maintain this policy until Ukraine’s territorial integrity is restored.”

The National Interest is associated with the realist school of Foreign Policy. In 2015, the magazine published an article by Maria Butina calling for better relations between the Russian Federation and a future US Republican administration. Butina was arrested by the FBI in 2018 and charged with conspiring to act as an unregistered Russian agent.