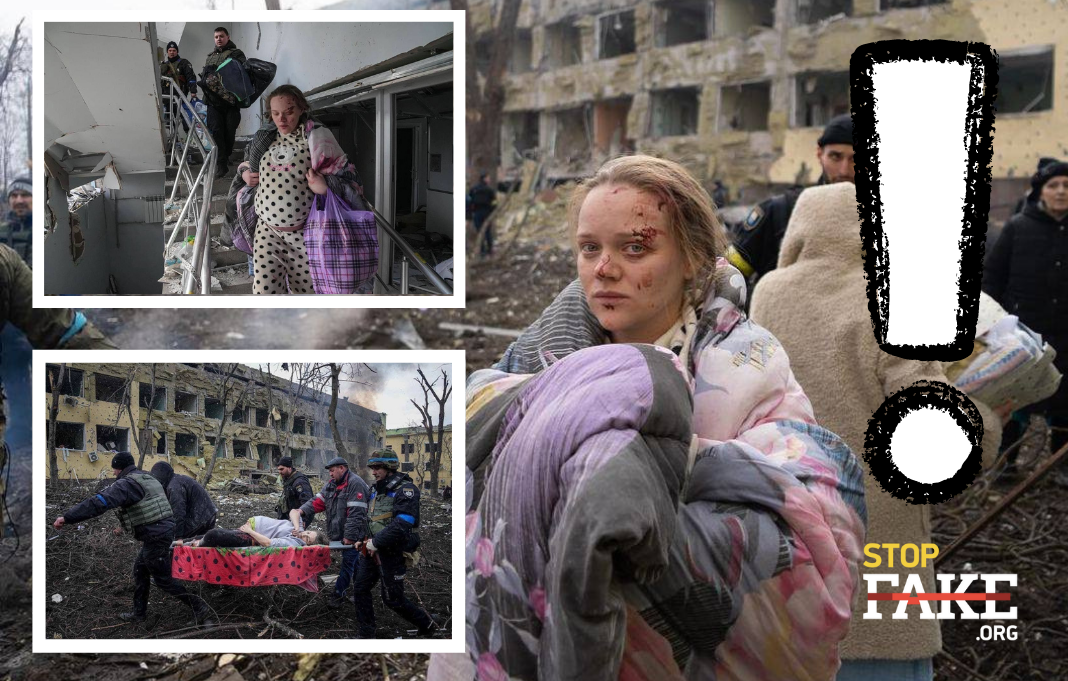 Russia’s propaganda machine is using the Kremlin’s official social media platforms to spread disinformation about the bombing of the maternity hospital in Mariupol, claiming that the March 9 bombing was “a great staging by Ukrainian propaganda” and the injured pregnant woman was actually a pregnant blogger from Mariupol.

The Russian Embassy in the UK tweeted that the photos showing pregnant women with bloodied faces were fake. However, after countless complaints by Twitter users, this tweet disappeared from the Russian Embassy’s UK Twitter feed.

Russian propagandists use three “arguments” to deny responsibility for the shelling and create their fake narrative: first, there were Azov battalion fighters in the maternity hospital at the time of shelling; second, there are only three photos from the scene and there are not enough pregnant women in them; and third, the photos all feature only one woman who changed her clothes to “play” different roles.

The main argument Russian propagandists use is that there could not have been any pregnant women in the facility because it has long been occupied by neo-Nazis from the Azov battalion. The Russian Embassy in the UK tweeted exactly this: “The maternity house was long non-operational. Instead, it was used by Ukrainian armed forces and radicals, namely the neo-Nazi Azov Battalion.”

To bolster this argument propagandist Telegram channels are using an “interview with the maternity hospital employee” published on March 8. But there is no interview to be seen. Following the link provided on the Telegram post one is taken to Lenta.ru story by Dmitri Plotnikov about refugees from Ukraine who are being received in the self-proclaimed Donetsk People’s Republic.

There is no interview with the maternity hospital employee in the Lenta.ru story, but there is convenient mention of a man named Ihor who tells Plotnikov that in the last two weeks of February men in military uniforms came to the maternity hospital where his mother works. Ihor does not know if they are Ukrainian military or from the Azov battalion. He says they broke all the locks, threw out the hospital workers and set up firing stations in the building to protect “fortress Mariupol,” as they explained to the staff.

Another propagandist take on the shelled hospital takes a different turn, asking if there really were pregnant women and new mothers in the maternity hospital then eyewitnesses and emergency services who arrived on the scene first would “immediately have taken photographs of the scene on their cell phones and not wait for a well know photo-journalist”.

But such photos and videos were taken and they do exist and can be found on the Facebook page of the Donetsk oblast police.

One of the Telegram channels accusing Ukraine of staging the attack claims that “in the photos of the destroyed maternity hospital there are no injured people, there are no mothers with children, no doctors. Only broken glass and broken furniture”.

We found video taken by the Ukrainian National Police and the Associated Press where there is footage of mothers and pregnant women.

In one of the videos we found the injured pregnant woman whom Russian propagandists said was a staged fake.

Russian propagandists claim that the photos from the hospital bombing all feature only one woman who changed her clothes to “play” different roles, adding two photos as alleged proof.

Upon examination we can see that the two women are not only dressed differently, but also their hair is different colors.

The AP video also shows a pregnant woman being carried downstairs on a stretcher, the same stairs that another pregnant woman descends on in a still photograph.