The European Union and the United States are preparing to launch full censorship of the internet Russian RT reported earlier this month.  The publication argues that a recent report presented by the British policy institute Chatham House calls for total control of the virtual information sphere in the United States and the European Union. RT cites Russian media experts who claim that the West wants to control the internet to increase the influence of their own propaganda and establish control over information flows. The article also declares that Russia is not spreading any disinformation and Western countries are supposedly finally beginning to understand this.

“Today more and more people in the West are beginning to understand that Russia’s actions in Syria are stabilizing the situation, that Russia has not interfered in the US elections and that Ukraine’s role in the MH17 catastrophe should be reviewed. Of course all these factors trouble our Western partners and after analyzing the situation, they have decided to take the road of censoring information flows,” RT writes.

Chatham House did indeed release a research paper in September of this year that addresses digital media reach, but it is not about internet censorship at all, but rather about EU-US cooperation in tackling disinformation. The paper analyzes the spread of propaganda in social networks and the media and addresses how Western countries can counter disinformation in the future. The paper does not call for total control of the Internet as RT claims, but only analyzes the elements of information warfare and emphasizes that disinformation is one of the main threats to democracy in the modern world.

The paper recognizes Russia as the main source of disinformation in the world. Accordingly, the Kremlin uses all available methods to disseminate fake information on such key topics as the 2014 downing of Malaysian Flight MH17 in eastern Donbas by the Russian military, the US national and midterm elections and the poisoning of former Russian spy Sergey Skripal with the nerve agent Novichok.

The paper notes the North Korea, Iran and China also employ disinformation that is directed against the EU and the US.

The paper proposes several avenues for countering fake information, chief among them, the eradication of monopolies among digital companies, advanced training for employees at all levels of government, the cooperation of analysts from various fields, election commissions, communication experts, journalists, legislators and civil society. Leading these proposals is the reform of the actual journalistic community and increasing the level of trust in media and politicians. To achieve this, the papers advises not to restrict freedom of speech by introducing censorship but to improve democratic mechanisms to establish complete transparency in the work of the media by naming the sources of media financing and ownership. 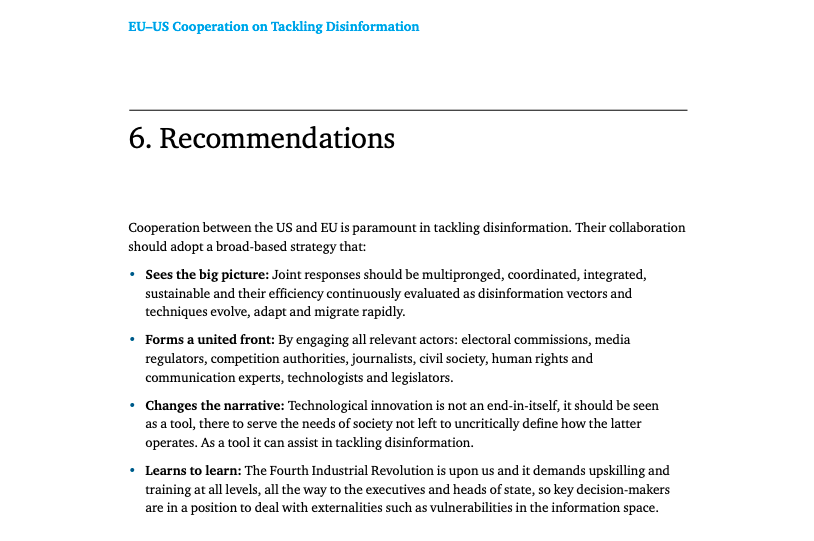 It is necessary to update the code of journalistic ethics and standards, the paper emphasizes.  Despite the fact that journalists are required to adhere to the principle of truthfulness of information, violations of this principle do not bring about any reputational damage to the media that spreads fakes. Ideally, media publishing untruthful information should ultimately lose their readers ’confidence. All innovations must be introduced gradually and in absolutely democratic ways so as not to violate freedom of speech, the paper concludes.