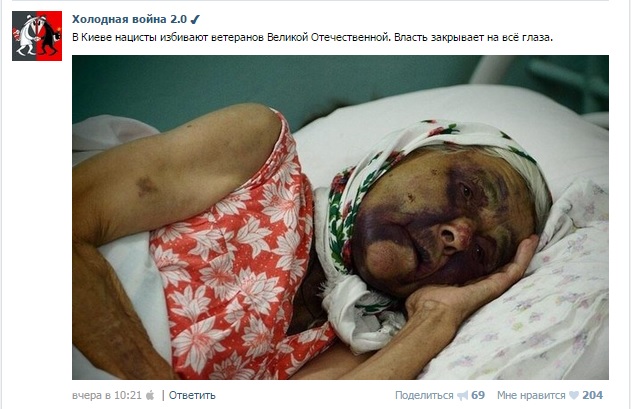 Several media related to the separatist movement in east Ukraine falsely reported that, on May 6, nationalists had severely beaten a certain Zinaida Serheyevna, an old woman and a veteran of the Second World War.

On May 7, the site Youth News Agency Novorossia published a story that young men stood in the way of the old woman and asked which side she had fought on. Then they started beating her, yelling “Glory to Ukraine!” Relatives of the victim were not able to file a police report, as they were told that police had “more important business.”

On May 8 the news agency Novorossia re-posted the story and accompanied it with a photo of a severely beaten woman, presumably in a hospital. The news also appeared on the Internet sites With-People. News Portal of the South-East and The Russian Pulse.

The news and photo was actively spread around social networks. The deputy chief editor of Moskovskiy Komsomolets, Ayder Muzhdabaev, posted it on his Facebook page. It was also posted in the Vkontakte group “Cold War 2.0”.

A Google-image search, however, reveals that the photo was first used two years ago as an illustration on the site Tonshaevo.ru about retirees having been beaten by Romas in Russia. The old woman’s name is Lisa Aplatova, and she is from the village Oshary, in the Tonshaevo District of Nizhny Novgorod Oblast.

This story was also covered by the television station Networks NN in the autumn of 2013.

Ukrainian mass media did not report about the beating of an old woman. The Kyiv police also do not possess information about such an incident. The fact that the woman’s surname is not given in the report also indicates that it is a fake.