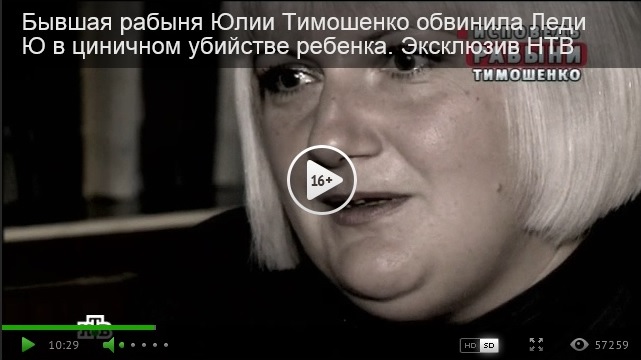 On December 6, Russian NTV channel informed in its program “New Russian sensations” that the member of Ukrainian Parliament Yulia Tymoshenko allegedly had a slave when she was serving her sentence in Kachanivska prison camp in Kharkiv region.

This “slave woman’s” name is allegedly Oksana Melnyk, she lives in Crimea at this moment.  In this program Oksana tells that she was forced to assist Tymoshenko with everything, to serve her and even to try her meal.  Oksana Melnyk also claims that in order to get to Tymoshenko’s prison cell she had a cover story of being accused in economic crimes under the article “economic negligence and forgery by an official” (there is no such an article in Ukrainian legislation).

The news item has a lot of inconsistencies. Indeed, Yulia Tymoshenko had a cellmate in Kachanivska prison camp.  That woman is called Yulia Abaplova, she was a banker convicted of economic crimes (providing fictitious loans).  She was even thought to be an informer.  And she looks entirely different from the heroine of the NTV news item.

After being released from jail Yulia Abaplova told in her interviews that she had had to help Yulia Tymoshenko, sometimes even to carry her.  But she did not mention trying her meal and any slavery.
Tymoshenko was sharing her sell with Abaplova for 4 months.  Then she was transferred to “Ukrzaliznytsia” hospital № 5, where she was alone in her room.

However, Oksana Melnyk’s story about living with Tymoshenko also does not look like the description of slave’s life.  She just tells that she cooked for Tymoshenko, tried her meal and helped her to move.  Judging by Oksana’s words, Tymoshenko did not mistreat or humiliate her, instead she had a fellow feeling for Oksana.

Besides journalists claim that Tymoshenko did her best to prevent this interview being issued.  But what exactly she did and why now Oksana is not afraid of her revenge – remains unclear.
While telling her story Oksana is inconsistent in her testimony from time to time.  She forgets and then remembers the crime she was convicted of, spells incorrectly the surname of Tymoshenko’s son-in-law and so on.

Then Oksana accuses Tymoshenko in death of her daughter, Kateryna Torchkova Oleksandrivna (11.1994-02.28.2014).  “Tymoshenko was released on February 22, and my daughter perished after 6 days, on February 28”, explains Oksana.  She thinks that Tymoshenko allegedly revenged on her for her interview that she had given to a Ukrainian TV channel while being in the prison camp (34:55 of the video).

According to the official line, Kateryna Torchkova choked to death with carbonic oxide, but Oksana Melnyk accuses Yulia Tymoshenko in her death.  It remains unclear why her daughter was not murdered in 2012, when Oksana had allegedly given that fatal interview, which infuriated Tymoshenko, and why Yulia Tymoshenko personally went to Crimea in February to kill Oksana’s daughter.  Besides, it was February 28 that a court dropped a charge from Tymoshenko, closed her case and rehabilitate the former prisoner.  On that day Yulia Tymoshenko was in Kyiv, talking with inhabitants of the camp site in Khreshchatyk.

Except for Oksana’s words in the news item there are no other evidences of Tymoshenko being privy to Kateryna Torchkova’s death.

At the end of the news item new inconsistencies appear.  Voiceover tells about Tymoshenko’s guests and says that they are coming to her birthday to “the center of Kyiv, Lesya Ukrainka Boulevard, 26 (41:15), but 41:55 a man is entering the building, which is spoken about, and we can see the number 13.  By the way, this building is the office of “Batkivshchyna” party, situated in Turovska Street, 13.  But if NTV journalists did not make an effort to verify this information, it means that either they did not try hard to verify other information in this new item.