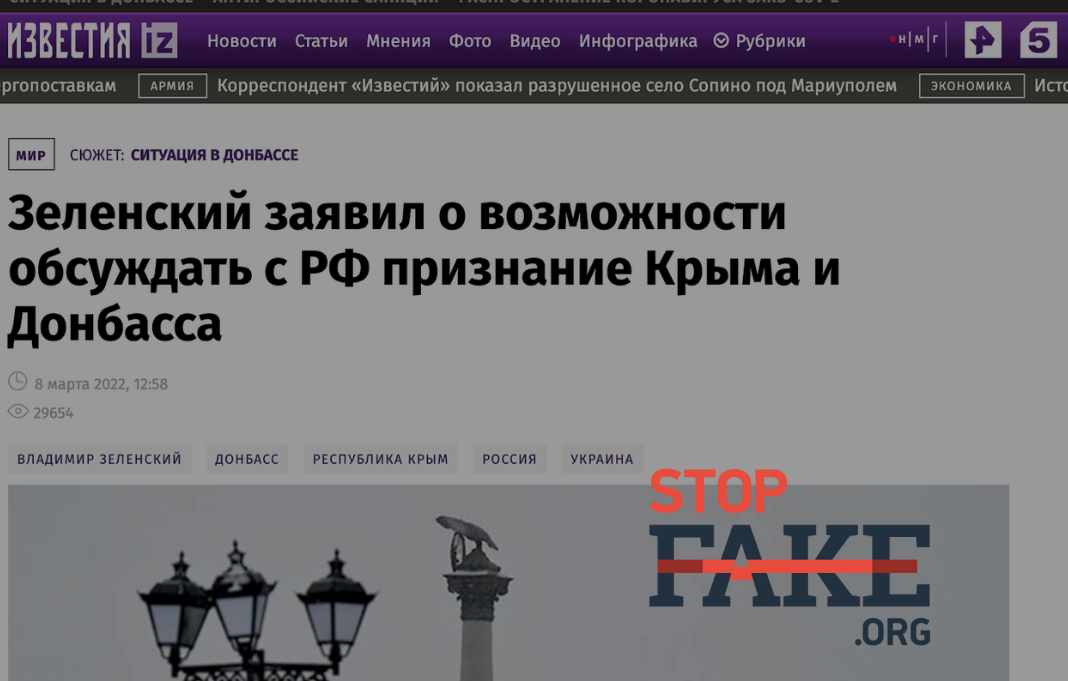 Ukrainian President Volodymyr Zelensky has never spoken about Ukraine’s intention to recognize Crimea and the self-proclaimed Donetsk and Luhansk People’s Republics as Russian, and the responsibility for the deaths of thousands of Ukrainians lies entirely on the invading Russian terrorists and Putin personally.

Russian media never stop trying to discredit Ukraine’s president Volodymyr Zelensky and they continue spreading fakes about the “imminent capitulation” of Ukraine. On March 8 scores of Russian media wrote that the Ukrainian President had “called Western countries responsible for the deaths of people in Ukraine” and declared his “readiness to recognize Crimea and the Donbas republics.” 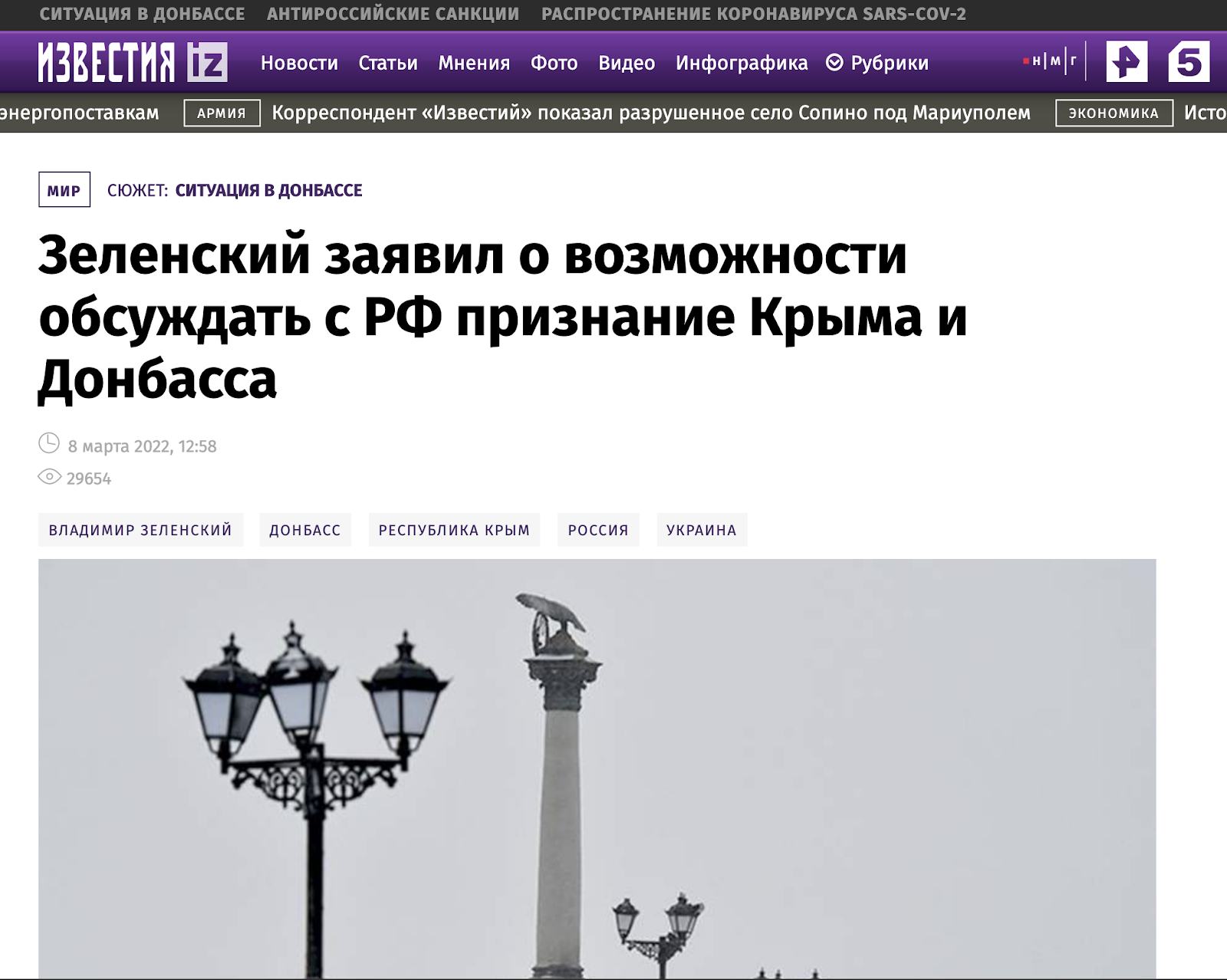 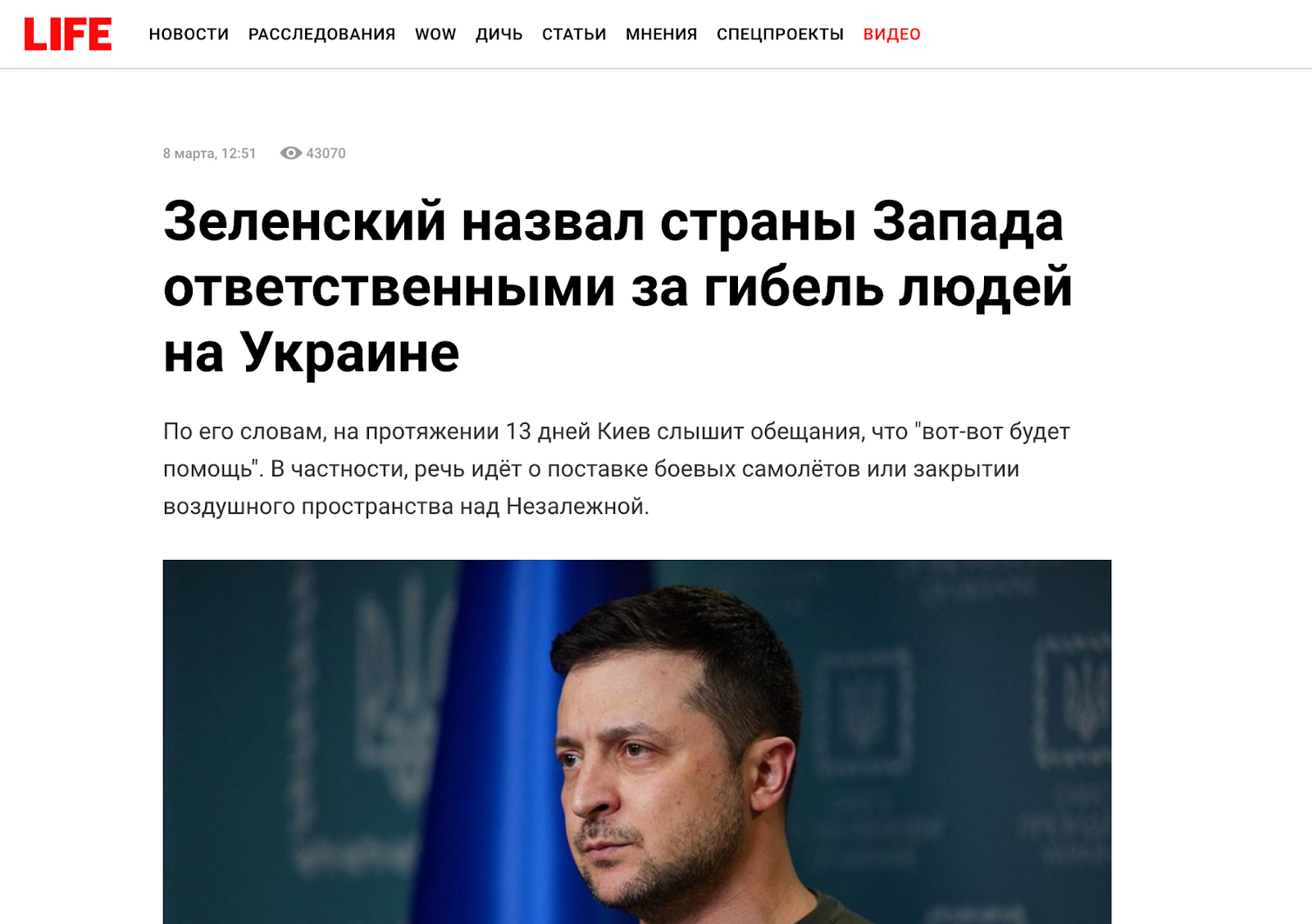 Russian propagandists completely distorted the content of two of President Zelensky’s interviews. The fake about the responsibility of “Western countries” for the deaths of people in Ukraine appeared after Zelensky’s daily video address on March 8 in which he spoke about the deaths of civilians, who were killed by the barbaric bombings of Ukrainian towns and cities by Russian invading troops.

President Zelensky appealed to Western partners for help with Russia’s war crimes, which violate the Geneva Convention rules about not attacking civilians and civilian infrastructure. Zelensky listed the war crimes that Russia was committing on Ukrainian territory and underscored Russia’s full responsibility for the deaths of Ukrainian civilians.

President Zelensky also rebuked Western countries for their slowness and procrastination in closing the sky over Ukraine in order to stop the Russian destruction of Ukrainians citizens and Ukrainian cities. Russian propagandists failed to include all of Zelensky’s words in their stories, citing only the part about Western countries. This is how the fake about Western responsibility for the deaths of Ukrainians was born.

“The blame for every death of every person in Ukraine from air strikes and blockades of cities is, of course, on the Russia state, on the Russian military. On those who give and carry out criminal orders. On those who violate all rules of war, who is deliberately destroying the Ukrainian people. The fault lies on the invaders and occupiers. But the responsibility for this is also lies on those who for 13 days somewhere in the West, somewhere in their offices cannot take an obviously necessary decision. On those who have not secured the Ukrainian sky from Russian assassins” Zelensky said.

In the same vein Russian propaganda also created the fake about Zelensky’s alleged “desire” to “recognize Crimea and the Donbas republics by snatching some of his phrases out of context from his March 7 interview with ABC News. Asked whether Ukraine was prepared to agree to Putin’s terms and recognize the occupation of Crimea and parts of Donbas, President Zelensky once again called on Putin to sit down at the negotiating table. At the same time, he reiterated that Ukraine is ready for dialogue and compromise but does not intend to capitulate.

“I’m talking about security guarantees. I think the points about the temporarily occupied territories and the unrecognized republics, who have not been recognized by anyone except Russia, we can discuss this and find a compromise, how these territories are to live on further. We are not ready for ultimatums. What must be done, Putin must begin talking, he must begin a dialogue,” President Zelensky said (04:44).

After the appearance of the fake about Ukraine’s willingness to recognize Crimea and the separatist republics, the President’s ruling Servant of the People Party issued their position on these issues. In a statement the party unequivocally said that Ukraine’s territorial integrity is not up for discussion. “We will have to decide how the lives of people in these territories will be regulated within our integral state. This is exactly what President Zelensky was talking about” the statement reads. The party’s position also affirms that the Ukrainian state is Donetsk, Luhansk and Crimea, Ukrainians do not accept ultimatums and do not give up their territories.