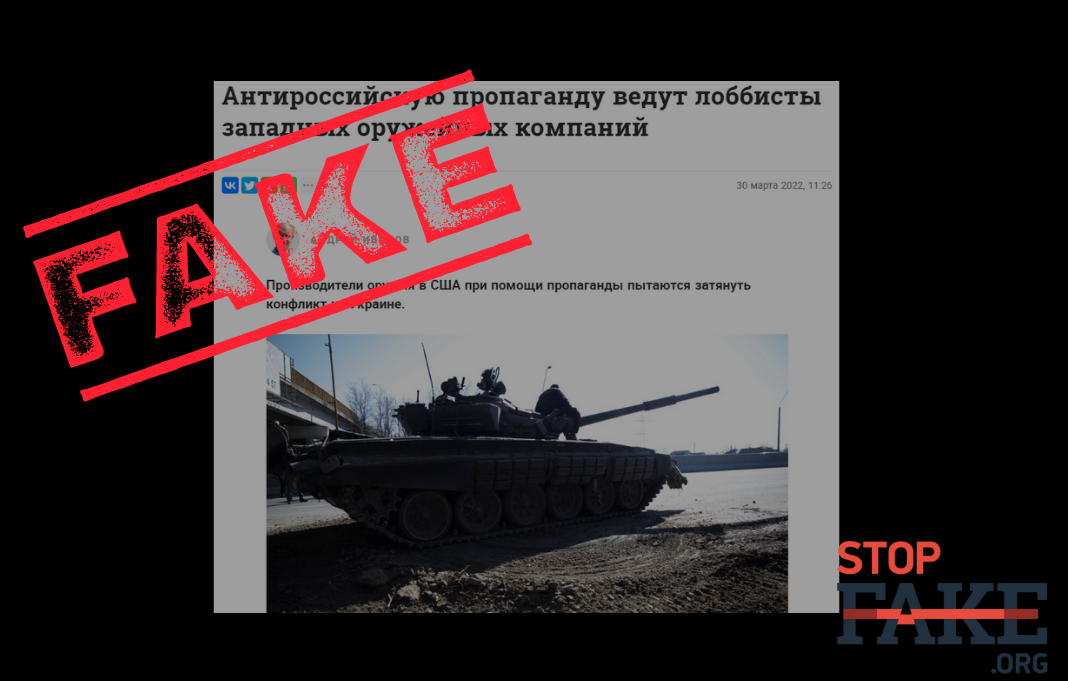 Former US Ambassador to Russia Michael McFaul never said that Ukrainian President Volodymyr Zelensky’s circle is involved in “schemes” to supply weapons to Ukraine. The Russian publication alleging this took McFaul’s words out of context and distorted his meaning entirely.

On March 30 the Russian news site REN.TV featured a story claiming that the US military sector is interested in prolonging the war in Ukraine so they can reap profits. Western arms manufacturers’ lobbyists are conducting anti-Russian propaganda, and President Zelensky’s circle is the middleman in this scheme, writes Russian political analyst Andrey Ivanov on the REN.TV website. Ivanov claims that former US Ambassador McFaul, whom he calls “an unofficial Zelensky adviser” admitted this to the Politico newspaper.

Michael McFaul does indeed figure in a Politico story from March 17 entitled The influencers behind the Ukrainian PR machine. The article focuses on lobbyists and communications specialists who are representing Ukraine’s interests, prior to Russia’s war against Ukraine those interests concerned energy security, since the Russian invasion, the primary concern is simply security. McFaul is quoted as saying that Zelensky and the people around him are sophisticated communicators. “These are people around Mr. Zelenskyy who are like the intermediaries and interlocutors. They’ve been interacting with the American elites and American media for a long time.” McFaul said. There are no schemes mentioned in the article, McFaul never uses the word, and the article never touches the subject of schemes of any kind.

A recent New York Times article reported that many US lobbying and legal firms who earlier represented Ukraine’s interests in return for handsome fees, are providing their services pro bono and helping Ukraine levy additional sanctions against Russia. The Covington & Burling law firm filed a motion on behalf of Ukraine with the International Court of Justice. The Politico article also notes that companies that had previously lobbied for Russia’s interests in the US, since the outbreak of Russia’s war have expressed readiness to represent Ukraine’s interests.

Ivanov calls Ambassador McFaul “Zelensky’s unofficial adviser”. McFaul told StopFake that he is not an adviser but responds when he is asked to do so. “I don’t have an official adviser’s role neither with the US government nor with the Ukrainian one. When I am asked, I regularly speak with official persons from both governments. These days I also regularly speak with Russians, but not with anyone from the Russian government” McFaul said.

Andrey Ivanov’s claim that the US weapons industry is interested in prolonging the war in Ukraine is also a manipulation. The Kremlin says its “special operation” in Ukraine can end only when the “demilitarization” of Ukraine is complete, Kyiv “stops hostilities,” refuses to join “any bloc,” recognizes Crimea as Russian and the self-proclaimed Donetsk and Luhansk People’s Republics as independent states. On April 1 Russia’s Defense Ministry announced that Russia’s campaign in Ukraine was entering a new stage, its goal is “the liberation of the Donbas republics”. Reacting to the announcement pro-Kremlin media declared that the last Russian soldier will not leave Ukraine “until the last Nazi is either tried or killed, and those leaders who issued criminal orders in Donbas are brought to justice”. Ukraine insists that the end of the war can be possible only after Russia withdraws its troops from Ukrainian territory and several Western powers provide Ukraine with security guarantees. Ukraine is ready to discuss the return of annexed Crimea and the occupied Donetsk and Luhansk territories through diplomatic channels.