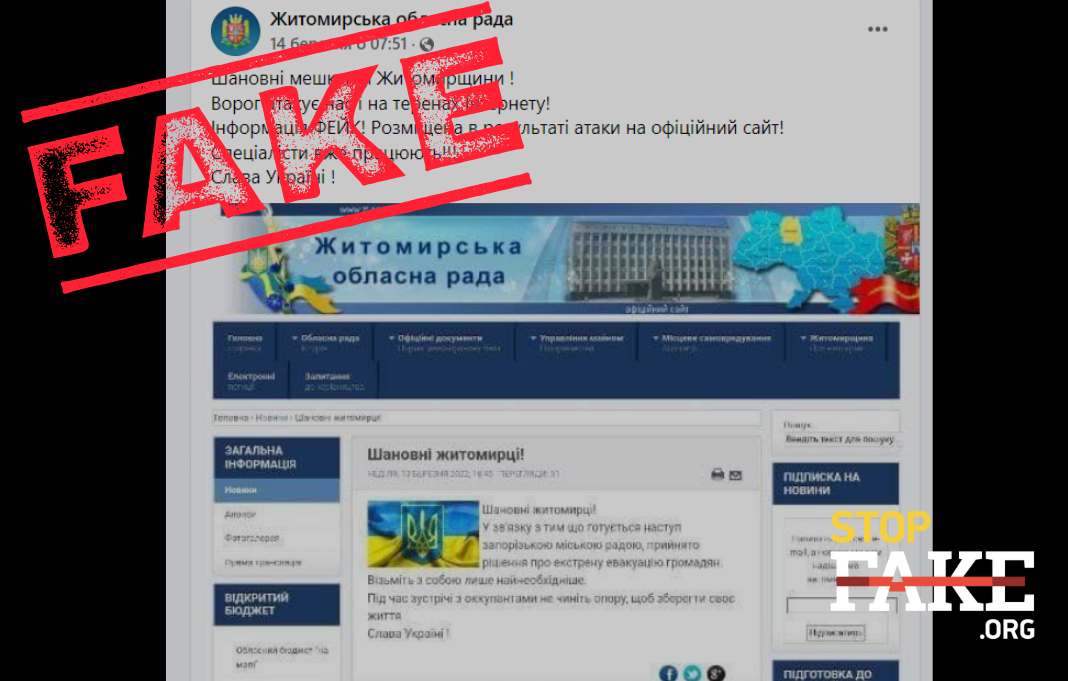 Russian media are disseminating fakes claiming that the Zhytomyr Regional Administration has called on the city’s residents to leave the city and “not oppose” the Russian invaders.

Zhytomyr is a city in northwestern Ukraine of some 266,000 people, it is a major transportation hub, the location of the Ozerne airbase, and the regional capital of Zhytomyr province.

The fake post reads as follows: Dear Zhytomyrtsi! In connection with the Zaporizhzhia city council preparing an offensive, a decision has been taken on the emergency evacuation of citizens. Take only your essentials with you. Upon meeting the occupants, do not resist, in order to protect your life. Glory to Ukraine!

The post allegedly appeared on the website of the Zhytomyr Regional Administration on March 13 at 18:45. However, there is no such post on the Administration’s website at all. On March 13 the site published three news items: Ukrainian Military calls not to share information about technical and military support from partner countries; March 13, 2022, 12:00 Russian invasion update: Zhytomyr serviceman killed in Kharkiv defense campaign.

In a post on its official Facebook page from March 14, the Zhytomyr Regional Administration explains that the fake message was a result of hacking. Administration IT specialists quickly removed the fake post.

Several pieces of evidence prove that the post in question was fake. If one searches the Zhytomyr Regional Administration website with the word ‘zhytomyrtsi’ one finds nothing. This is because people who live in Zhytomyr are referred to as ‘Zhytomyriany,’ and not Zhytomyrci. All official statements addressed to the people who live in this city refer to them as Zhytomyriany.

Aside from this glaring inaccuracy, the fake post contains a number of spelling and punctuation errors, which point to a Russian source. For example the work occupant – okkupant – is spelled using two ks, as it is in Russian. In Ukrainian okupant is spelled with only one k. Furthermore, the post contains a patently absurd claim, that “the Zaporizhzhia city council is planning an offensive”. Why would one city in Ukraine plan an offensive against another, today, when Ukraine is more unified than ever against the Russian invader. Zaporizhzhia is an eastern Ukrainian city whose nuclear power plant was fired on and seizes by invading Russian troops.