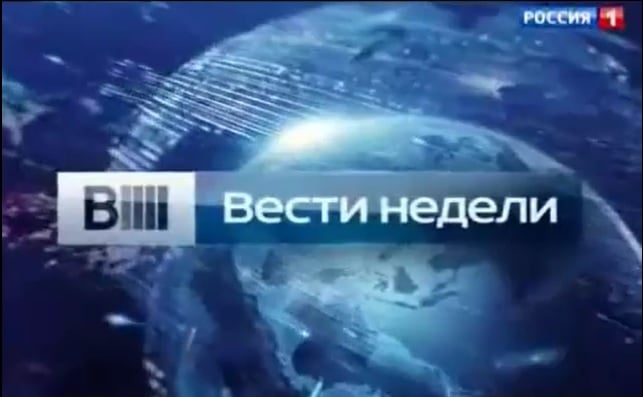 In October 19’s Week News issue with Dmitry Kiselev  voiced a number of false news and statements.  Some of them we decided to disassemble and refute.

For example, the speaker of the news release says the phrase “imaginary Russian troops on Ukrainian territory, which was a shame for President Poroshenko to even mention during the Europe-Asia summit in Italy” (see 10:40 of release).  However, the presence of Russian military (as volunteers, and especially business travelers) and military equipment in the east of Ukraine is not a fiction, but a reality.  Stopfake repeatedly wrote about it, and now there are more and fresh arguments of the military presence – photos and videos provided by the Ukrainian and foreign journalists.

Another lie is scandalous statement about the Ukrainian Insurgent Army (UPA).  Russia  channel journalists filmed the story titled “Malignant mutation of Ukrainians” (see starting at 47:48) about the new date Day of Defender of the Ukraine, which now will be celebrated on October 14th.  The authors of the plot has repeatedly stressed that it is – the date of creation of the UPA.

This story shows UPA in absolutely negative light.  In particular, it is stated that UPA soldiers were guilty in Khatyn tragedy.  However, the official historians have shown long ago that the perpetrators of the death of over a hundred people – the 118th police battalion.  It was formed in 1942 in Kyiv from the regular officers of the Red Army and who agreed to cooperate with the occupiers, have passed special training in various schools in Germany, dressed German uniforms and took the military oath of allegiance to Hitler.  More about this can be read on the official site of the memorial complex “Khatyn”.

Also in the story of the UPA, for dramatizing the situation, journalists used the video editing of two completely different meetings.  They variable show the annual peaceful action, March of Heroes on Pokrova and meeting with aggressive provocateurs (who were arrested later) near the Verkhovna Rada on the same day – 14 October (see 52:30 and 59:20).  As you know, near the Verkhovna Rada 50 offenders who were not part of the march of heroes were arrested.  But because such manipulations, the impression may occure that any rally, which referred to the UPA, is bound to be fierce, aggressive and remind actions “death squads.”

It needs to be recalled that on October 14 for the Ukrainians is in the first place, a Christian holiday that has its roots in the days of the Byzantine Empire.  In addition, it especially revered Zaporozhye Cossacks as a temple festival.

At 48:50 of the newscast Dmitry Kiselev voiced allegedly confirmed fact that the UPA had not fought against the German occupiers.  It is a lie that has been repeatedly refuted by historians.

And finally, journalists of Russia  channel has once again raised the topic of the Donbas economic autonomy. To understand that this region of Ukraine is not self-sufficient, and certainly does not feed the rest of Ukraine can be found, for example, the statistics for 2013 year.  Beside Kyiv, to the budget more money than they receive, give Odesa, Dnipropetrovsk and Zhytomyr region.  All other regions consume more than they give.  Donetsk region transferred to the state budget of UAH 7.8 billion last year, but it took 8.5 billion UAH.  Luhansk gave to Kyiv about 3 billion – almost as much as Zaporizhia, but recieved 5.3 billion UAH, which is a billion more than the Zaporizhia region.