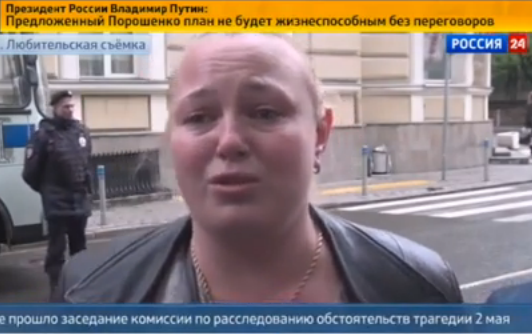 June 21 TV channel Russia One on the air of “Vesti” program showed a news item concerning investigation of the incidents in Odesa on May 2 when around 40 people had perished.

Once again already famous “actress on tour” Mariya Tsypko appeared in this news item. She had showed up previously in different Ukrainian cities as a local resident, a victim or an eyewitness of Ukrainian army “atrocities”.

In this hot news item of “Vesti” a voiceover says: “Eyewitnesses and relatives of perished people are threatened. This video was filmed near the Ukrainian Embassy in Moscow, where activists of the Kulikovo Field, forced to leave Odesa, gathered. They can’t return to their homeland as this is dangerous now”.

After that “an activist of the Kulikovo Field” Tsypko told the channel about persecutions against pro-Russian activists, organized by the Head of Odesa local police.

In turn her colleague announced with tears in her eyes: “A great number of our activists perished. No wonder, we had sticks and they had guns”.

Woman’s announcement, that during events in Odesa pro-Russian activists had only sticks and their opponents had guns, is a lie as well. As Stopfake wrote on repeated occasions (first, second), the main cause of the conflict on the Kulikovo field and the tragedy in the Trade Union Building was the preceding confrontation on the streets of the city, when pro-Russian activists attacked pro-Ukrainian people and football fans, who had organized the demonstration before a match. During this conflict several pro-Ukrainian activists were killed, and as a result the Kulikovo Field and the Trade Union Building were attacked.