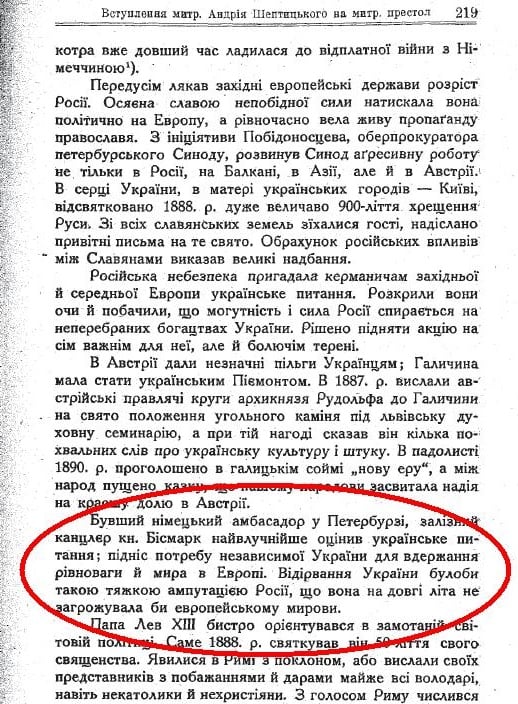 Russian political scientists, journalists and social networkers often use several citations about Ukraine, allegedly belonging to Chancellor of Germany Otto von Bismarck, in order to prove that Western Europe always wanted to divide Russia. As it turned out, these citations were taken out from different Russian books about Bismarck and could not be found in the works of the Chancellor himself.

“The power of Russia could be undermined only by separating Ukraine from it”, Bismarck (N. Ulianov, Ye. Morozov, Ukrainian Separatism: Ideological Sources of Independence from Russia, 2004).

“…German Chancellor Otto von Bismarck: “The power of Russia could be undermined only by separating Ukraine from it… Ukraine should not only be torn away from Russia but also set against it. We should play off one part of the single nation against the other and watch one brother killing the other. In order to accomplish this we need to find and cultivate traitors among the national élite and using them we have to change self-consciousness of one part of the great nation to such an extent that they would hate everything connected with Russia, they would hate their origin not even realizing this. All the rest is about timing” (G. Kriuchkov, Ukraine before crucial choice, 2010). This citation is the most widespread in the Network.

“At his time Bismark said that there was only one operation lethal for the great body of the Russian Empire, an amputation of Ukraine”. (I. Savvon, Russia – Ukraine, 2001).

“…Bismark’s words, that “there is only one operation lethal for the great body of the Russian Empire, an amputation of Ukraine”. (A. Shutov, Post-Soviet territories, 1999. The same Shutov’s citation in “Russia on the millstones of history”, 2008).

“Bismark also said that in order to destroy Russia they should tear Ukraine away from it”. (D. Rogozin, citation from “Nezavisimaya gazeta”, 06.17.1997).

DW reached Bismark Foundation in German town of Friedrichsruh for a comment. PhD Ulf Morgenstern, research scientist of the Foundation, who studies works of Otto von Bismarck, informed: “Bismarck did not and could not say anything of this kind”. There are no evidences – either the Chancellor’s notes, or records of his speeches, or draft letters, or memoirs of his contemporaries – that contain any statements of such kind. In his memoirs the Chancellor told about “The Party of a Weekly Newspaper” in Prussia that forecasted “dividing of Russia”. Bismarck, who in 1871 was appointed as the first Chancellor of Germany, evidently disapproved the idea.

Besides, Bismarck did not know such a word as “Ukraine”. It became a part of European political vocabulary later.

Some researchers think that Ukraine was mentioned in one context with Bismark for the first time in 1926 in the book by I. Rudovych, The Accession of Metropolitan Archbishop Andrey Sheptytsky in Lviv (“Bohoslovia”, Lviv, 1926, p. 219). And later it was “borrowed” from there by Soviet historians.