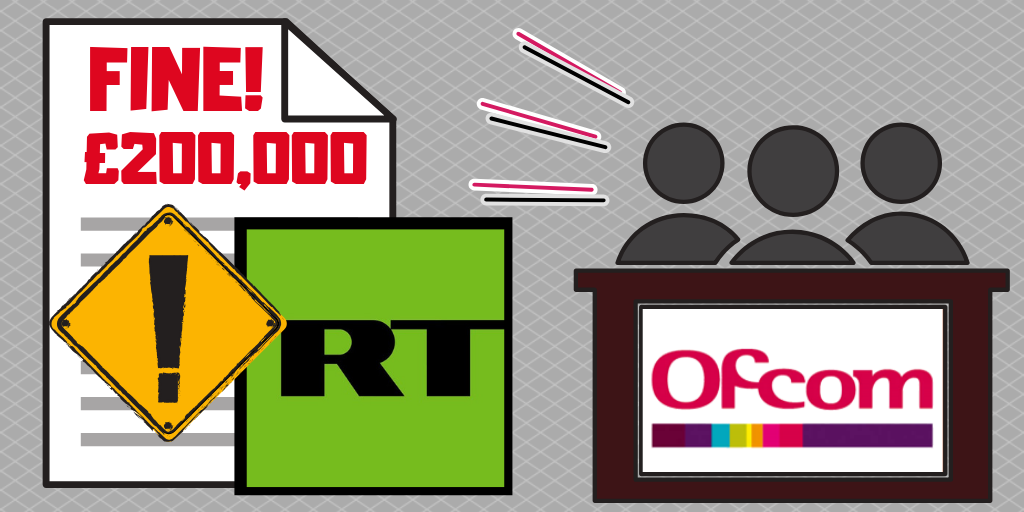 Ofcom’s investigation found that RT failed to preserve due impartiality on seven occasions between 17 March and 26 April 2018 in its reporting on the Salisbury poisoning and the war in Syria – major matters of political controversy and current public policy.

The UK media regulator said that, taken together, these breaches represented serious and repeated failures of compliance with broadcasting rules. The watchdog was particularly concerned by the frequency of RT’s rule-breaking over a relatively short period of time.

This is the largest fine Ofcom has ever issued for a breach of its impartiality rules. As part of the penalty, RT must also broadcast a summary of Ofcom’s findings in the precise format and time chosen by the regulator.

In a detailed report summarising its investigation, Ofcom said it was alerted to RT’s programs by a combination of complaints from viewers and its own monitoring.

Ofcom investigators watched and provided transcriptions of every program in question. The content of the programs contains a full selection of recurring pro-Kremlin disinformation narratives, including that the nerve agent used in the Skripal poisoning came from the UK’s own Porton Down laboratory, that the British secret services were involved in the poisoning, that it was all just a big provocation against Russia, and intended as a distraction from Brexit.

Both the Skripal poisoning and the chemical attack in Syria have been the subjects of a sustained pro-Kremlin disinformation campaign, with occasional attempts to link the two events in order to amplify and legitimise the disinformation messages.

This is not the first time that RT has run into trouble over its misleading “reporting”. Since 2012, RT’s parent company, TV Novosti, has been disciplined for 15 breaches of Britain’s broadcasting code, mostly for RT’s coverage of the wars in Syria and Ukraine.

Meanwhile, earlier this year, RT’s Russian service was forced to make changes to an article in which it accused Deutsche Welle, RFE/RL, and Voice of America – as well as the team of Russian opposition leader Alexey Navalny – of spreading disinformation.

RT has disputed Ofcom’s decision and applied for a judicial review. The hearing is scheduled towards the end of the year.