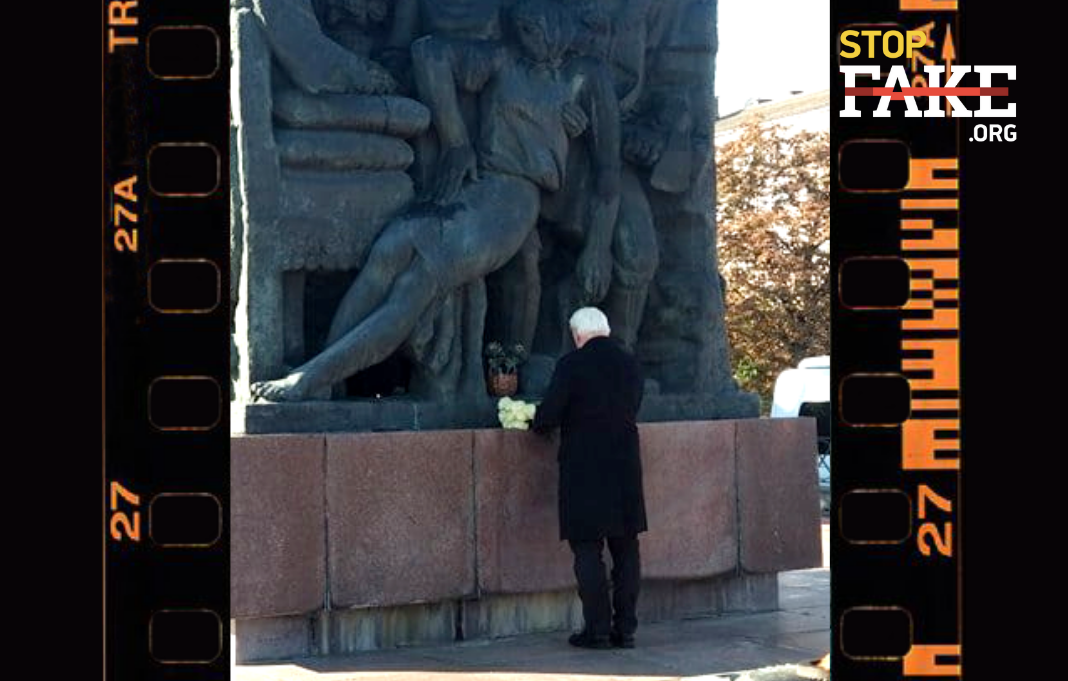 By Sergej Sumlenny, political analyst and a former Director of Heinrich Böll Foundation office in Ukraine

Germany still denies its historical debt towards Ukraine, preferring to exclusively remember Ukrainian collaborators. This is a wrong and amoral approach.

On January 17, German Foreign Minister Annalena Baerbock denied the option of providing lethal weapons to Ukraine amid ongoing Russian build-up.  While thousands of Ukrainians enlisted to “territorial defense” units – an analogue of National Guard in the US – Ms. Baerbock, a 41 y.o. Green party politician who was cheered as a fresh wind in German foreign politics, has done nothing new but repeat the arguments of her predecessors. Germany has its history, and therefore will not deliver weapons to Kyiv.

This argumentation had been used by a myriad of German politicians and its narrative is crystal clear. German Wehrmacht and SS killed a lot of Russians and waged a terrible war on Russian territories. One must not send German weapons now to a country, where they will – even theoretically – be used to kill Russian soldiers.

Regarding Ukraine, this argumentation is historically false and amoral.

Indeed, in Nazi German vocabulary, the war with the Soviet Union was called a war on Russia. “Ein Russlandfeldzug” – a Russia invasion. German posters named “a Russian” as the Germany’s archenemy – regardless of the fact that the Wehrmacht killed Soviet Jews, Ukrainians, Tatars. Fighting in the USSR, German soldiers believed they were fighting Russians in Russia, and wrote: “Kharkiv, Russia” in their photo albums.

As a Wehrmacht soldier Heinrich Böll – later a pacifist and a Nobel Prize winner – who came to Ukraine in 1943, wrote in his diary on November 7th, 1943, as he was departing from Ternopil: “Russland!!!!!” He used capital letters and five exclamation marks – so great was his excitement to see this exotic land. The problem was, the land he was seeing was Ukrainian, occupied by the Soviet Union just two years earlier in accordance with the Hilter-Stalin pact. Only Böll’s imagination had turned it into “Russia”. Decades later, when he was a pacifist and world-famous author, Böll supported Ukrainian poet Vasyl Stus and pointed out in his interview with the German broadcaster WDR Radio, “the only crime of Vasyl Stus is that he writes his poems in Ukrainian”.

Today’s German public opinion appears to be much more in line with Heinrich Böll’s 1943 views and not the view he held in 1985, that of a confirmed pacifist and Nobel Prize winner, who respected Ukrainian independence and understood how Russia tried to subordinate Ukraine by exterminating Ukrainian identity.

Germans resort to the Russian view every time they address WWII history. In early 2021, German president (and the highest moral authority in German politics) Frank-Walter Steinmeier said in an interview that the Russian Nord Stream 2 project – a tool to economically undermine Ukraine and Poland – cannot be stopped because Germany is in debt to Russia for German war crimes. But what about Ukraine, Belarus or the Baltic countries? Germany’s war of extermination was not a war on Russia, it was a war on many nations, many of which were a part of the Soviet Union because the Hitler-Stalin pact allowed the Moscow regime to occupy these European nations.

When it comes to responsibility, Germans seem to practice a strange segregation in their views. Despite the huge number of victims that the Nazi war machine and occupation brought on Ukrainians, Ukraine remains a blind spot in German remembrance. We know that historically it was Ukraine, which lost over 16% of its population in WWII – more than the Russian Soviet republic. Germany occupied 100% of Ukrainian territory. Bloody protracted battles of unimaginable terror played out in Ukraine. German Sonderkommandos – Jews-extermination-special-units – moved meticulously from city to city and town to town, killing every single Jew, finally coming to Kyiv, where within just two days they killed over 30,000 Jews in Babyn Yar – the biggest single massacre of Jews in the history of Europe.

Not only Ukrainian Jews were the victims of German racial insanity. In March 1943 in Koryukivka, a town just 200 kilometers north of Kyiv, German Wehrmacht killed over 6,000 civilians and burned more than 1,200 houses in a “revenge” action. This was the biggest execution of civilians in the history of WWII. In Czech Lidice – a symbol of German atrocities – 172 persons were killed in retribution for the assassination of SS-Obergruppenführer Reinhard Heydrich, and in Oradour-sur-Glane in France 642 persons. And that is not all. Over 2 million Ukrainians were slave workers brought to Germany to work in agriculture and in military industry. Every single one of them was brand marked as an Untermensch — “lower race” person and therefore excluded from any human treatment.

It truly is a wonder that Ukrainians – the nation which suffered so much from German Nazi occupation, does not have the sympathy and support of modern Germany. Quite the opposite: in German discussion, all too often one hears criticism of Ukrainians as “Nazi collaborators”. There is no discussion about WWII in Ukraine that does not the “Nazi collaborators” accusation, and no one stops to think about how amoral such an accusation is.

Almost every nation occupied by the German Reich produced collaborators. There were SS Divisions made up of Belgians, Norwegians, French and Albanians. France had the formally independent Nazi-allied government of Vichy, but this did not stop France from being an Allied power which defeated the Nazis. Slovakia, Bulgaria, Romania – all these nations were at one time allies of Nazi Germany. Even Azerbaijan and Armenia, while never occupied by Germany – had their SS national units: Azeri and Armenian SS legions, mostly formed from ethnic Azeri and Armenian POWs. Moscow was a loyal Hitler ally in 1939-1941, having occupied Poland together with the Nazis, they celebrated their victory by a joint parade in Brest. Russia had two SS divisions: Russland 1 and Russland 2. In today’s Germany none of these nations is ever accused as a “Nazi ally”.

Ukrainians did have an SS division – exactly as France, Belgium, Serbia, Netherlands or Hungary had. And here is where we encounter a very quintessential problem. In the modern German perception, Ukrainians were either collaborators or henchmen, while Russians were heroes or victims. This is the result of very effective Soviet propaganda which nefariously conflated Russian heroism with Soviet military achievements and took ownership of the military sacrifices of all the nationalities of the USSR who fought in the Red Army

Ukrainians fought bravely against the Nazis. Ukrainian soldier Lyudmila Pavlyuchenko, born in the Kyiv region, was the most effective Soviet sniper in WWII, killing 309 Nazis singlehandedly. In 1942, Pavlyuchenko was sent by the Soviet government to the US, her mission was to inspire Americans to support the USSR in its war against Germany. Born in the northeastern Ukrainian region of Sumy, Ukrainian fighter pilot Ivan Kozhedub, with 66 confirmed kills, was the most effective fighter pilot of all Allied nations. Anatoly Shapiro, a Ukrainian Jew, born in the Poltava region, was a Soviet major who opened the gates of Auschwitz and deactivated Nazi landmines to let prisoners free.

In German perceptions, all these ethnically Ukrainian heroes first mysteriously transform into “Soviets” and then into “Russians”. For example, the prominent German weekly “Die Zeit” writes repeatedly of “Russian” soldiers who fought in Berlin, even calling the soldiers who installed a red banner on the Reichstag “Russian” – despite the well-known fact that one of them was actually a Georgian private named Kantariya. At the same time, German perception completely ignores Soviet/Russian support of the Nazis. Neither Stalin’s alliance with Hitler in 1939-41, nor the fact, that over a million Soviet citizens fought in Russian units on the side of the Nazis ever enters into the modern German perspective. In fact, Russian participation in the Nazi military machine was huge. The Russian Liberation Army (ROA) was one of the biggest vehicles within Hitler’s war against the world. With up to 130,000 soldiers in 1945, under command of General Andrey Vlasov, a former Soviet Lieutenant General, decorated with the Order of Lenin, ROA used the St. Andrew Flag as their ensign. This flag was the ensign of the Russian imperial navy and is now used by Putin’s Russian navy. But this was just the beginning. The 29th Russian Liberation People’s Army (RONA) division of the SS with up to 8,000 soldiers (1st Russian SS division), the “Russland” Division with up to 10,000 soldiers – both fought under the imperial Russian tricolor, todays Russia’s national flag. The 15th Cossack SS Corps with up to 30,000 soldiers, under command of General von Pannwitz, the 1st SS Sonderregiment Waräger (special regiment) with up to 2,500 soldiers, a Russian Corps in Serbia (formed out of ethnically Russian emigrants) – all these Russians were Nazi soldiers.

There were also attempts to collaborate with Nazis on a structural level. For example, in November 1941 – August 1943 on the territory of the Bryansk, Oryol and Kursk regions of Russia, with Nazi permission former Soviet authorities tried to create a “Lokot republic” with 581,000 inhabitants. Many Russian orthodox priests welcomed the Nazis and offered their prayers for Hitler.

Do cases of massive collaboration mean that in 1941-45 the Soviet Union or Russians were allies of Hitler? No. Does this mean Russians should be branded as “collaborators”? No. So why do Germans love to call Ukrainians “collaborators” because several thousand Ukrainians chose to fight on the side of Hitler? One cannot explain it by any other means than the influence of effective and unceasing Soviet propaganda, and later Russian propaganda.

This German perspective could remain a funny artifact of national delusion were it not for its dramatic impact on current German foreign policies. While Russian president Vladimir Putin repeatedly says his international policies are inspired by the views of Russian philosopher Ivan Ilyin, the world ignores the fact that Ilyin was the founder of “Russian Fascism” and an admirer of Adolf Hitler even after WWII. Meanwhile Ukraine, whose citizens in free and fair elections elected a Russian-speaking candidate of Jewish heritage president with 73% of votes – remains a country which Germany views with skepticism and prefers to remember only the facts of Ukrainians’ brief collaboration with the Nazis, facts, which do not differ from countless cases of collaboration by other European nations.

The problem with German memory and its crimes in WWII is that effectively, Germany considers some nations “criminals” and prefers to ignore its own German crimes against them. This is not only a cowardly attempt to offload a part of Germany’s own responsibility onto the victims’ shoulders, but also a way to green-light Berlin’s cooperation with regimes which copy Nazi tactics and attempt to decide the destiny of Central European nations in an unholy Berlin-Moscow alliance.

The German treatment of Ukrainians as a nation of collaborators must stop. Germany must acknowledge its huge unpaid debt to Ukrainians and begin repaying it – with all the tools which will help to defend Ukrainian freedom and independence, including lethal weapons. Anything else is a denial of Germany’s Nazi past and is amoral.