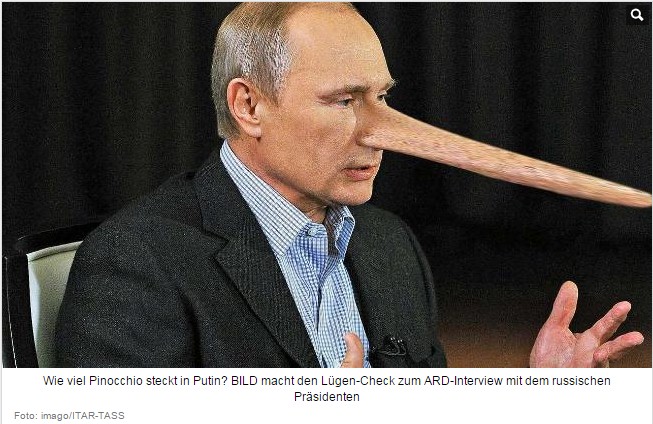 Russian President Vladimir Putin, during his interview with the German TV channel NDR, which he gave on November 15, twisted and distorted the facts to justify its position, stated the German newspaper Bild. In that interview Putin compared the annexation of the Crimea with the separation of Kosovo. Indeed, the magazine writes, NATO troops entered Kosovo without a UN mandate, and Russia and China opposed.

“However, there is a big difference between the Crimea and Kosovo: in Kosovo hundreds of thousands Albanians of threatened death or became a refugee because of the actions of the regular army and Serbian irregulars. And the deployment of troops in Kosovo occurred after several years of unsuccessful attempts to resolve the conflict diplomatically”- note the authors, adding that the Crimea was eventually annexed by Russia, but Kosovo gained independence.

Commenting on Putin’s remarks that “in today’s world, people who are struggling and who consider this a fair fight (…) will always find weapons” (as he answered the question, how did Donbass fighters gained weapons), the publication emphasizes that no NATO or the German intelligence service have a doubt that the separatists in the east are supplied by Russia. Reporters noted it can be assumed that the separatists have bought small arms somewhere and brought it to the Donbass. But it is quite difficult to bring heavy military equipment such as tanks, for example.

“The sanctions are directed primarily against the financial, military and extractive industries. Particularly dependent on imports from Western countries is Russian mining industry. For oil extraction in remote areas in the Arctic and the development of shale mining Russia needs Western technologies. The flow of oil from readily available stocks comes to an end” – the newspaper notes.

In addition, Putin tried to convince the German audience that this year the economy of his country expects an increase of 0.5-0.6% and up to 1.2% next year. Further growth is expected to accelerate – 2.3% in 2016 and 3% in 2017. Although the Central Bank of Russia has officially revised its forecast for this year to 0.3% GDP growth and 0% in the next because of the exhaustion of traditional sources of growth – oil and gas.

Speaking about the future of Ukraine, Putin played words, twisting the concept of “decentralization” and “federalization”. However, Bild said that the Russian president is not talking about the federalization of Ukraine on the German model, and split the state to the confederation. “With the influence of the pro-Russian republics in the east of the country, Putin could stop the advance of Ukraine to the West” – supposes the author.