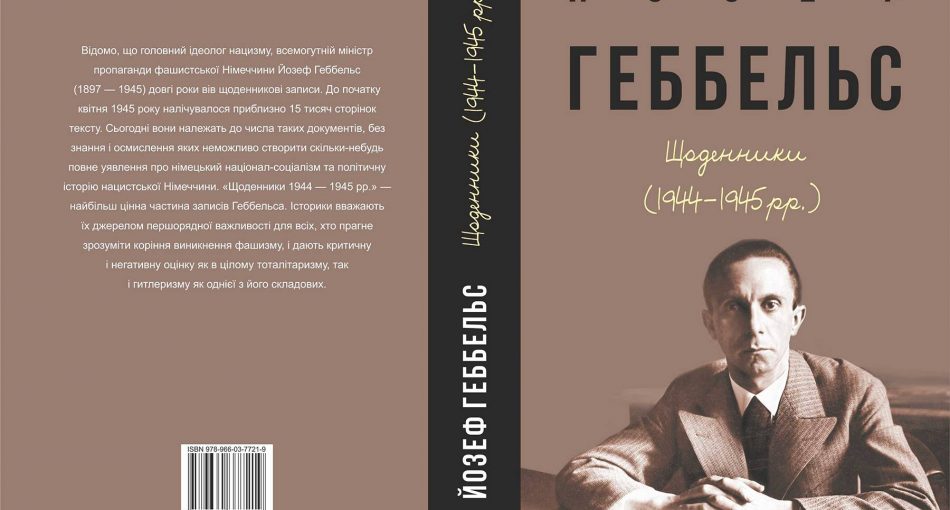 Russian media are incensed that Nazi propaganda minister Joseph Goebbels’ diary will be published in a Ukrainian translation. With monotonous predictability, the Kremlin claims Ukrainians are glorifying Nazism.  But Moscow’s real concern is that an examination of Goebbels’ techniques exposes how closely Putin’s methods, using lies and fake news, are derived from and mirror those of the masterful Nazi propagandist.

Talking about the book, the director of the Kharkiv-based Folio publishers, Alexander Krasovycky told StopFake that it would help Ukrainians understand how “the secrets of current Russian propaganda have their roots in Goebbels”. Krasovycky said that Folio chose the last period of the Goebbels diaries 1944-1945, focusing on the defeat of Nazi Germany.

“If Russian media are paying attention then we’ve hit the bullseye. There’s a clear parallel between how Putin uses Russian propaganda today wielding the weapons invented by Goebbels” Krasovycky said. Having used Goebbels’ methods as a template in their own propaganda and disinformation offensives, it seems Russian media are very uncomfortable to have Goebbels’ disinformation best practices exposed as their inspiration. And so, employing one of their teacher’s trusty methods, Russian media simply completely omitted Krasovycky’s explanation as to why the diaries would be published at this time.

A historically annotated version of Adolf Hitler’s “Mein Kampf” prepared by a team of historians and scholars was published in Germany last year by the Munich based Institute of Contemporary History.

Explaining why the Institute was publishing the critical version of the long banned book, director Andreas Wirsching said that a time when authoritarian political beliefs and far-right slogans are again gaining in popularity, examining the Nazi worldview and propaganda helps us  re-examine the ominous roots and results of such totalitarian ideologies.