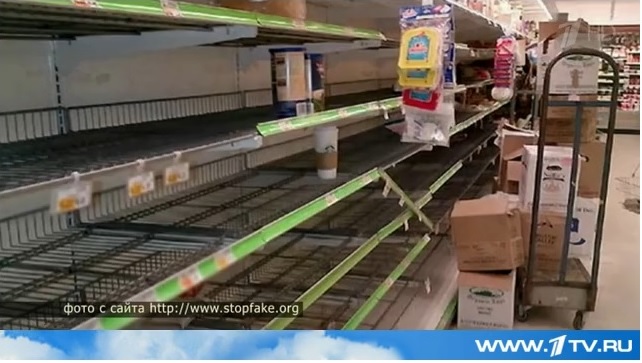 July 9 Russian Channel One showed in the evening news at 9 p.m. by Moscow time a news item “Clear refutation of the most popular myths about holidays in Crimea”. At 3:14 a journalist tells about the exposure described previously by Stopfake.org in the article “Espreso.tv Illustrated Food Shortage in Crimea with a Picture from the U.S.”

Particularly, the journalist of the Channel One says the following: “The next myth of the Ukrainian mass media: Crimea is on the brink of food disaster. As an illustration they demonstrate a photo of empty shelves in a store. And it seems that it does not matter that the photo was made in American supermarket a few years ago. The main aim is to scare off Ukrainian tourists”.

At this time the fake photo with the copyright “photo from http://www.stopfake.org” appears on the screen.

The Channel One care for Stopfake refutations and their popularization is a positive tendency.

Therefore, having entitled the image “photo from http://www.stopfake.org” and having not specified that Stopfake.org was not a creator of the fake but its refuter, the Channel One imputed the authorship of the fake to Stopfake.org and hereby created one more fake, that is a lie.

Besides, at 4:21 the Genoese Fortress in the city of Sudak is shown in the video. And the journalist in the news item states that he is in the district of Big Alushta. Sudak, as it is well-known, does not belong to this district.